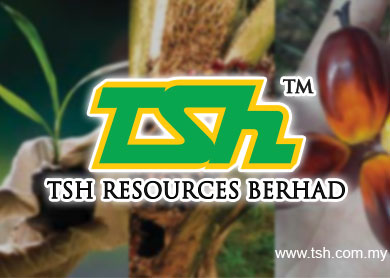 KUALA LUMPUR (Nov 18): TSH Resources Bhd reported a 71% drop in third quarter net profit from a year earlier, mainly due to recognition of an investment disposal gain in the previous corresponding quarter.

Plantation firm TSH's filing with Bursa Malaysia showed net profit dropped to RM24.28 million for the third quarter ended September 30, 2014 (3QFY14) from RM83.27 million in 3Q13 when it made an investment disposal gain of RM85.3 million.

"However, excluding the profit on disposal of investment of RM85.3 million in 3Q13 and foreign exchange losses of RM43.7 million and RM6.5 million in 3Q13 and 3Q14 respectively, the core operating profit for this quarter rose to RM40.1 million from RM34.5 million of the corresponding quarter in the previous year," TSH said.

Going forward, TSH remains optimistic on long-term prospects of the palm oil industry. The firm said it would continue to focus on planting programme in Indonesia while exploring expansion of its plantation land in Malaysia.

With FFB production expected to increase this year, the company expects to achieve improved profit in the coming quarters.