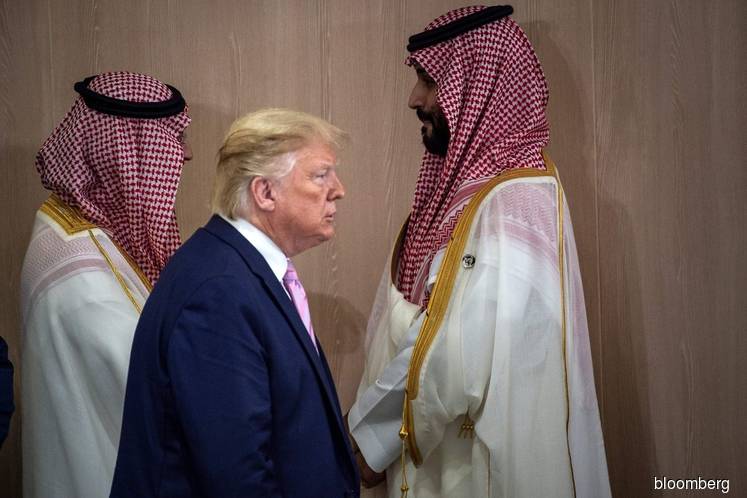 The alleged hacking of Bezos — the world’s richest man and owner of the Washington Post — creates a new foreign policy headache for Trump, whose Middle East strategy has largely hinged on cultivating close ties to the Saudi leader.

Trump has shied away from direct confrontation with Prince Mohammed before, publicly rejecting the Central Intelligence Agency’s conclusion that he had ordered the killing of Jamal Khashoggi, a Saudi critic and Post columnist, despite widespread public outcry. And so far, there’s been little indication the U.S. will move to penalize Saudi Arabia over the alleged hack of a top U.S. executive.

At the same time, Trump has made no secret of his animus toward Bezos. The president has frequently taken aim at him for his newspaper’s critical stories of the administration, and Amazon has sued the government, claiming it was denied a major Pentagon contract because Trump considers Bezos a “political enemy.” Amazon declined to comment for this story.

White House spokesman Hogan Gidley said that U.S. officials “obviously take those situations seriously,” but stressed that “Saudi Arabia is obviously an important ally.” Treasury Secretary Steven Mnuchin declined to discuss the attack in an interview with CNBC on Thursday, but said American companies should “absolutely” continue to conduct business with the kingdom.

“We do a lot of business with Saudi Arabia,” Mnuchin said. “They’re obviously a big component of energy. We have an important defense relationship with Saudi. And that’s not going to change based upon one article in the paper.”

The Trump administration’s reluctance to publicly condemn the apparent hacking could partially be motivated by a lack of firsthand intelligence. The forensic analysis that found a months-long hacking campaign against Bezos was conducted by investigators hired by the Amazon chief. Two United Nations experts who viewed the findings — that Bezos was hacked after he received a video file sent from Prince Mohammed’s WhatsApp account in 2018 — have called for an investigation, even though the U.S. government hasn’t.

Prince Faisal tried to downplay the findings, saying the analysis was conducted by a private company that hasn’t been independently vetted and offered “no hard evidence to substantiate the claims it is making.”

Prince Mohammed has also denied ordering the murder of Khashoggi, saying in an interview with “60 Minutes” he would make no exceptions in prosecuting those responsible for the journalist’s death. A court in Saudi Arabia has sentenced five people to death and given three others jail time in relation to the killing.

“When a crime is committed against a Saudi citizen by officials, working for the Saudi government, as a leader I must take responsibility,” he said. “I must take all actions to avoid such a thing in the future.”

The White House appears eager to steer clear of a story that touches on ethical and policy questions that have hounded Trump throughout his time as president.

Congressional Democrats have said that a lawyer for Jared Kushner has acknowledged that Trump’s son-in-law and senior adviser used WhatsApp to communicate with foreign leaders. CNN has reported those conversations included messages with Prince Mohammed, raising questions over whether Kushner or other U.S. officials could also be victims of hacking, putting classified material at risk.

That could prove particularly damaging to Trump, who regularly criticized former Secretary of State Hillary Clinton for her use of a private email server during the 2016 presidential campaign. The White House declined to respond to requests for comment about Kushner’s use of WhatsApp.

But the Bezos hack is drawing the spotlight to the broader U.S.-Saudi relationship, which has created a series of foreign-policy controversies for a U.S. president who has fashioned himself as both a uniquely successful negotiator and a champion of withdrawing from perpetual conflicts in the Middle East.

Despite the flap over Khashoggi’s killing, the U.S. has continued to provide military aid to Saudi Arabia for its military intervention in Yemen — even though the U.N. concluded Saudi airstrikes inflicted heavy civilian casualties and exacerbated the humanitarian crisis there.

Meanwhile, the Trump-ordered killing of Iranian general Qassem Soleimani — a move that came after a Houthi drone attack on a state-owned Saudi Aramco oil processing facility — has caused tension to spike in the region.

The Pentagon dispatched some 3,000 troops — including two additional fighter squadrons and supporting personnel — to Saudi Arabia, after the drone attacks. Amid criticism that he was adding troops despite his pledge to withdraw from the region, Trump falsely claimed in a Fox News interview that Saudi Arabia had “already deposited US$1 billion in the bank” to offset the cost of the deployment.

Ned Price, a former CIA intelligence analyst and National Security Council spokesman to President Barack Obama, said the Trump administration’s response to the Bezos cyberattack was just a continuation of a policy of public silence, while drawing closer to Riyadh in the aftermath of the killing of Khashoggi, a U.S. resident.

“This time it’s a cyberhacking, and the response is the same,” Price said. “We heard next to nothing in the way of attribution or even condemnation, and their actions are telling.”

Price noted that the Obama administration made a point of publicly condemning incidences with significant public interest when intelligence pointed to a clear culprit, such as Russian interference in the 2016 presidential election, the downing of Malaysia Airlines flight 17 by Russian-backed separatists in Ukraine, or North Korea’s hack of emails and documents from Sony Pictures. The Obama administration imposed additional economic sanctions in retaliation for the North Korean hack of Sony, a private business.

The Trump administration’s response to the Bezos incident will also likely receive additional scrutiny because of the ongoing legal battle over allegations by Amazon that the federal government has treated the company unfairly, because of Trump’s personal animosity toward Bezos over the Post’s journalism.

Earlier Thursday, Amazon asked a federal court to temporarily block Microsoft Corp from working on a US$10 billion Pentagon cloud contract. In November, the company alleged that Trump’s enmity for Bezos caused the Pentagon to rule against its bid for the Joint Enterprise Defense Infrastructure, or JEDI, contract.