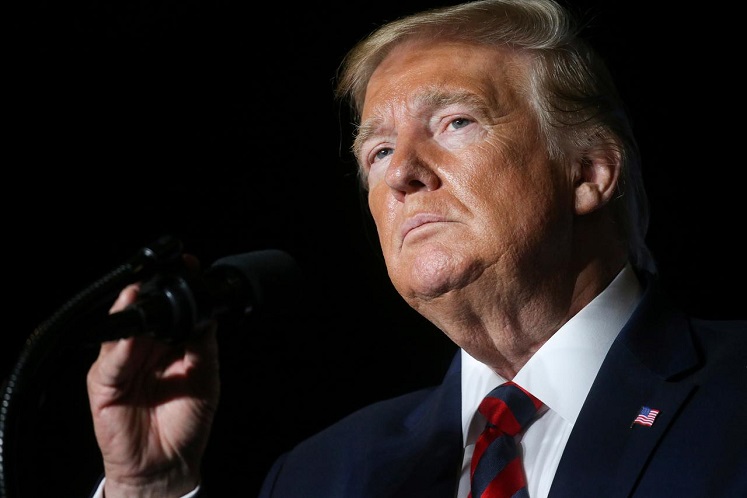 WASHINGTON (May 30): President Donald Trump’s long-touted response to China for its crackdown on Hong Kong included a barrage of criticism but stopped short of fully escalating tensions between the two nations.

While the US president’s speech Friday was heated in rhetoric, it lacked specifics around measures that would directly impact Beijing. He announced the US would begin the process of stripping some of Hong Kong’s privileged trade status without detailing how quickly any changes would take effect and how many exemptions would apply.

The president also promised sanctions against Chinese and Hong Kong officials “directly or indirectly involved” in eroding Hong Kong’s autonomy but didn’t identify individuals. The administration hasn’t yet decided under what authority it would implement that action, according to a person familiar with a matter, who declined to be named because the deliberations are private.

US stocks erased losses and traded little changed as Trump stopped short of implementing more draconian measures against China, with the S&P 500 Index rising 0.5% at the close in New York.

The president said that the US will terminate its relationship with the World Health Organization, which Trump has accused of being too deferential to China and of failing to provide accurate information about the spread of the coronavirus. He also said he would limit visas for certain Chinese students.

Both those moves are tangential to China’s escalations in Hong Kong and don’t strike at Beijing to the degree that some in markets had feared earlier in the week. For instance, there was no unraveling of the phase-one trade deal signed between the world’s two biggest economies in January.

Trump repeated a list of his grievances with China and punted tougher policy measures that his administration had discussed, including financial sanctions.

His remarks also didn’t include mention of legislation passed by Congress this week that could sanction Chinese government officials over the treatment of Uighurs, who have been forcibly detained in internment camps in China’s Xinjiang region.

“This binds the president to nothing with regards to China,” Derek Scissors, a China analyst at the conservative American Enterprise Institute. “With regards to a Hong Kong policy, it is a non-event. Nothing happened.”

Hawks Pushing
The Trump administration and China for weeks have been trading barbs over who’s to blame for the impact of the coronavirus pandemic in the US and Republican lawmakers have been pushing Trump to hold the country accountable. More hawkish advisers wanted the president to take decisive action against Chinese Communist Party officials for alleged human rights violations in the city.

Trump’s announcement came after China’s legislature this week approved a plan to draft legislation that Hong Kong democracy advocates say will curtail freedom of speech and undermine the island’s independent judiciary, and after Secretary of State Michael Pompeo decertified the former British colony’s autonomy under US law.

That certification determination, however, doesn’t mean the US has to treat Hong Kong exactly like mainland China for purposes of tariffs, sales of sensitive technologies or visas. Instead, the administration has a wide spectrum of options for actions to take — but most of them do little harm to Beijing and instead hurt not only Hong Kong but also the US.

Hong Kong’s Secretary for Justice Teresa Cheng said it’s within the rights of the central government to pass national security laws since the city is part China, even though it operates under a separate administrative system.

“In so far as the national security is concerned, as in any other country in the world, this is a matter that belongs to the central authorities, whether it is a unitary or federal state,” according to a government transcipt of her comments to the media. “Any other state that tries to use coercion or whatever means with a view to interfering with the sovereign right of a state to pass its own national security law is arguably infringing on the principle of non-intervention under public international law, and that is not acceptable.”

Relationship Bottom
Trump’s remarks omitted key details about what actions he’s taking, but his tone marked an escalation of hostile relations with China, said Jude Blanchette, China expert at the Center for Strategic and International Studies. “This further entrenches the view in Beijing that we haven’t found rock bottom yet in the relationship,” he said.

The president said Beijing “unlawfully claimed territory in the Pacific Ocean” and “broke its word with the world on ensuring the autonomy of Hong Kong.”

“The Chinese government has continuously violated its promises to us,” Trump said. “These plain facts cannot be overlooked or swept aside. The world is now suffering as a result of the malfeasance of the Chinese government,” he added, referring to the pandemic.

Chinese officials earlier Friday called potential US actions over Hong Kong “purely nonsense,” saying the matter was an internal affair and that essential freedoms in the city would remain intact.

Beijing urged the US to stop its “frivolous political manipulation,” Chinese foreign ministry spokesman Zhao Lijian told reporters at a daily briefing, reiterating Beijing’s support for Hong Kong police in upholding the law. Chinese officials have indicated they may retaliate against US firms over the president’s decisions.

Trump ramped up expectations for his announcement on China actions for several days this week. Even without many immediate actions outlined, the president used Friday’s announcement to laud his administration’s tough stance on Beijing with less than six months left before the presidential election.

“This was an election speech,” Blanchette said. “This will be the tone and tempo until November.”