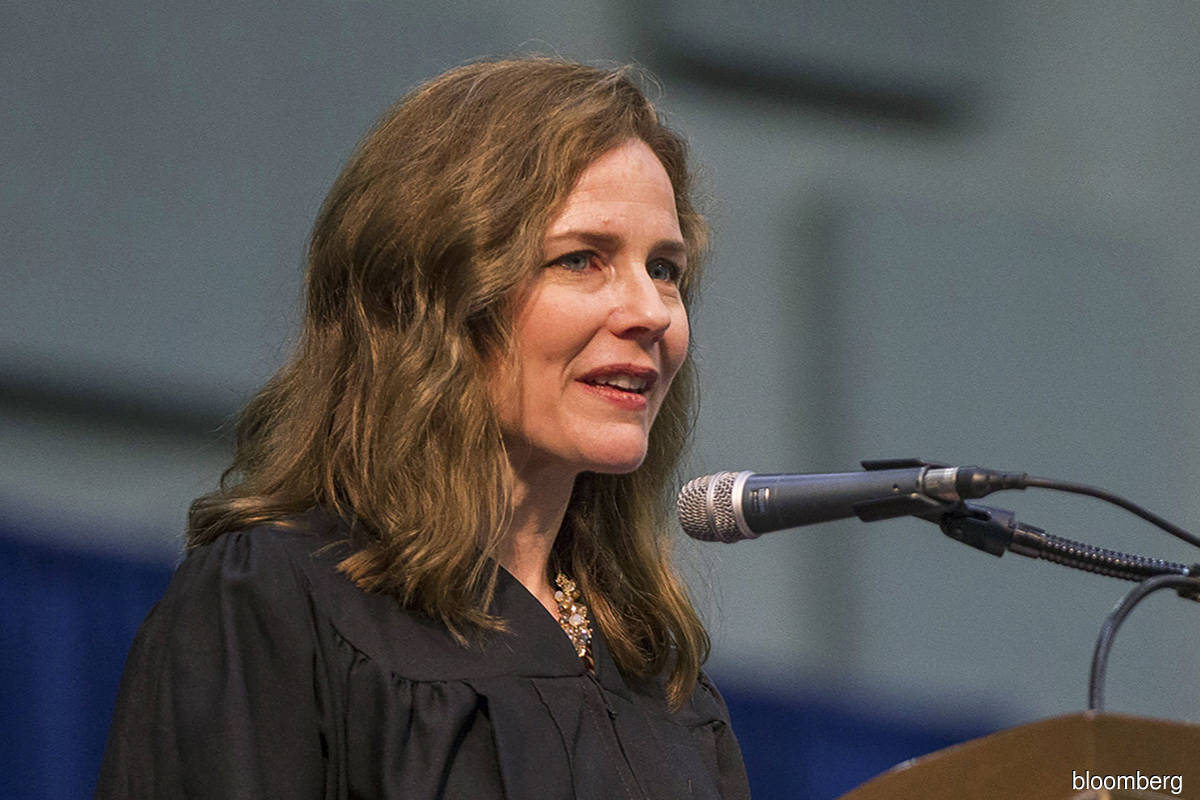 (Sept 22): Donald Trump is moving toward nominating Amy Coney Barrett to replace the late Justice Ruth Bader Ginsburg on the Supreme Court, according to people familiar with the matter, despite the president saying Monday he’s considering as many as five candidates.

Barrett was at the White House on Monday, one of the people said. She is a favorite of anti-abortion rights advocates, who are heavily lobbying the White House and Trump personally to nominate her. She’s preferred by Senate Majority Leader Mitch McConnell, according to people close to him.

And her supporters have pointed out to the White House that as a Midwestern Catholic, Barrett may help the president secure votes for his re-election in vital Rust Belt and Great Lakes states where he currently trails Democratic candidate Joe Biden.

Trump told reporters at the White House on Monday he is looking at “five women” to fill the vacancy but has “one or two” of them in mind as finalists. The president said Barrett is among those under consideration.

Asked if he would meet with all five of his candidates in person, Trump said: “I don’t know, I doubt it. We’ll meet with a few, probably.” A White House spokesman declined to comment on the president’s Supreme Court candidate meetings.

Within the White House, the only candidate for Ginsburg’s seat currently attracting serious interest other than Barrett is Appeals Court Judge Barbara Lagoa. She is a Cuban-American from Florida, as Trump has repeatedly noted, which might help him in that must-win state.

But Lagoa is at the moment a distant second to Barrett. The president has expressed some skepticism about her conservative credentials because Lagoa drew the votes of 27 Democrats when she was confirmed to the Eleventh Circuit Court of Appeals, people familiar with the matter said. Still, the process has been fast moving and the president could change his mind before an announcement is made.

Asked if he will meet with Lagoa later this week when he travels to Florida, Trump said he “may.”

Trump is set to light off a furious political battle over the Supreme Court seat vacated by Ginsburg’s death on Friday only six weeks before he stands for re-election. The prospect that he’ll replace the liberal icon with a conservative jurist has outraged Democrats, who responded by pouring more than $120 million into the party’s fundraising platform ActBlue over the weekend.

Senate Democratic leader Chuck Schumer told colleagues that “nothing is off the table” if Republicans replace Ginsburg and Democrats take the White House and Senate in November. Democrats are increasingly talking up the possibility of adding justices to the court as a possible response.

Trump has told allies that he thinks Barrett, 48, is a smart, hard-nosed, conservative jurist who would also come across well during televised confirmation hearings, according to one of the people. Officials are also encouraged that Barrett survived a tough confirmation fight in 2017. The Senate confirmed her with a 55-43 vote that largely fell along party lines.

Trump also believes Barrett won’t be wobbly on major issues for conservatives, including abortion, gun rights and health care, when they come before the court. Trump has been disappointed in some of the decisions of his first appointment to the court, Justice Neil Gorsuch, one person said.

Gorsuch angered religious conservatives when he wrote the majority opinion in a case earlier this year in which the high court held LGBTQ individuals are protected from employment discrimination under the 1964 Civil Rights Act.

Barrett was one of Trump’s finalists in 2018 when he replaced Justice Anthony Kennedy. The president instead nominated Brett Kavanaugh, but Barrett allies were told by White House staffers at the time that she was being saved for the next round of possible nominees.

White House Chief of Staff Mark Meadows has brought up Rushing, who is from his home state of North Carolina, while White House Counsel Pat Cipollone has pushed for Todd to be considered. But Barrett has widespread support inside the building.

Trump has hinted he’s considering a wider field to build suspense before he announces a nominee, but is focused on Barrett, one of the people said. The president told reporters at the White House that he would make an announcement by week’s end.

“We’ll make a decision -- probably Saturday, but Friday or Saturday,” he said.