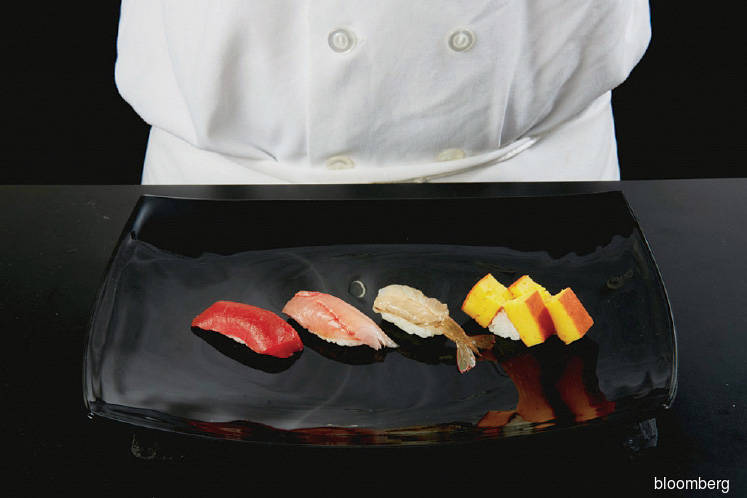 Sushi Nakazawa now has a Michelin star. Photos by Bloomberg The Inn at Little Washington once again is Washington’s only three-star restaurant. The Michelin Guide is not running a popularity contest in Washington.

The international restaurant rainmaker just released its star rankings for the US capital, and it included several major surprises. The insanely popular Filipino spot Bad Saint — one of the country’s best new restaurants in 2016, according to Bon Appétit, with a wait to get in that has inspired a TaskRabbit industry of line-standers — fell off the list completely. In the 2019 guide, it earned a Bib Gourmand [good value for quality] designation.

Sushi Nakazawa, a restaurant that did make the list, is one of the most divisive in the country. It is not the quality of the fish that causes controversy; it is located in the Trump International Hotel.

“There was no pause about the hotel that it’s located in. It’s all about the food on the plate for the star,” says the chief inspector of the US Michelin team, speaking on condition of anonymity. The restaurant also holds a Michelin star for its New York flagship. The inspector adds that for US$150 (RM628.50), the value for the fish on the plate was good, relatively speaking.

Sushi Nakazawa was one of four new one-star restaurants on this year’s Washington Michelin list. Another is Little Pearl, an innovative breakfast and dinner spot from chef Aaron Silverman. The seven-course tasting menu — a series of snacks, including a devilled egg crafted from meringue called “angel eggs” — is one of the great deals in the country.

“The expertise that’s going into the menu, for US$49, is astounding and clearly indicative of a star,” says the Michelin inspector.

Also claiming a star is the Middle Eastern Maydan, which has won accolades for its dramatic live-fire cooking setting, and was promoted from a Bib Gourmand.

This is the fourth year the guidebook has recognised Washington. “We are pretty certain to add new destinations in the US, but we expand step by step. We don’t want to compromise,” says Michelin Guide international director Gwendal Poullennec with regard to the future.

Indeed, while many people consider Washington to be the most exciting food city in the country, there’s still just one three-star for the nation’s capital, the 41-year-old Inn at Little Washington helmed by chef Patrick O’Connell, and only two two-star restaurants, Minibar, the avant garde tasting counter from save-the-world chef José Andrés, and Pineapple and Pearls from Silverman, who now has four Michelin stars total, the most in DC.

“It’s like Christmas here today. You have no idea going into it, and they don’t tell you what the criteria is, so it’s a big surprise. But the overall feeling in this city is that Michelin brings positive, it brings conversation about the DC dining community,” says the chef, whose empire also includes the one-star Rose’s Luxury.

The 2020 guide now offers 18 starred restaurants, up from 15 in the previous edition.

Still, it seemed there were more losers than winners for a town so rich in culinary talent. Kith & Kin, which has received praise for the quality of its Afro-Caribbean food and whose chef Kwame Onwuachi won the James Beard rising star award, was not recognised by Michelin, nor was the well-regarded Spanish spot Del Mar. In fact, for all the places to eat in the US$2 billion, dining-heavy project Wharf, the closest it got to a star was a Bib Gourmand for the Southeast Asian Kaliwa.

The guide’s value-dining destinations, Bib Gourmands are loosely defined as “quality restaurants that have menu items that offer two courses and a glass of wine or dessert for US$40 or less”, although the inspector notes that the guide gives “leeway” and that a better description is “around US$40”.

Last year, the guide’s former international director, Michael Ellis, noted that Michelin inspectors were monitoring ethnic restaurants, notably Bad Saint, to see if they could move up from Bib Gourmand status. “Filipino food has not lent itself to Michelin stars the way some of the great cuisines, like Chinese, have,” he said. “We looked at it this year, but the meals didn’t line up with the quality for value. It’s a great restaurant but not a Bib,” says the Michelin inspector who oversaw this year’s judging.

Here is the full list of Washington’s Michelin-starred restaurants. An asterisk (*) denotes a new entry. — Bloomberg