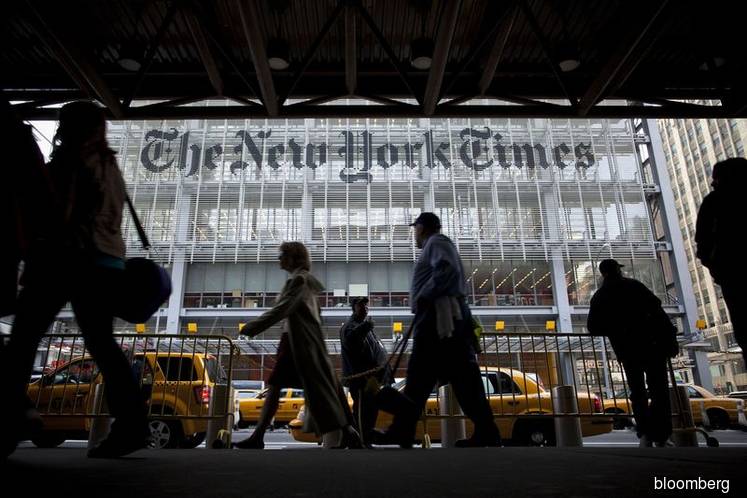 (Feb 27): President Donald Trump escalated his war on the press by suing New York Times Co. over an opinion column that said his 2016 election campaign had agreed with Russia to exchange positive foreign policy for help in defeating his rival, Hillary Clinton.

The Times published a false and defamatory piece in March 2019 that claimed the campaign had an “overarching deal” with Russian President Vladimir Putin’s oligarchy to swap assistance in the race against Clinton for relief from economic sanctions imposed by Barack Obama’s administration, according to a lawsuit filed by the president’s election campaign in New York state court on Wednesday.

The campaign says the column, by former Times executive editor Max Frankel, refers to meetings between Russian lawyer Natalia Veselnitskaya and Trump officials in 2016, which it says ended without an agreement.

“The Times was well aware when it published these statements that they were not true,” the campaign argues in the suit. “The Times’ own previous reporting had confirmed the falsity of these statements.”

Danielle Rhoades Ha, a spokeswoman for the publisher, said in a statement that the Trump campaign “has turned to the courts to try to punish an opinion writer for having an opinion they find unacceptable.”

“Fortunately,” she wrote, “the law protects the right of Americans to express their judgments and conclusions, especially about events of public importance. We look forward to vindicating that right in this case.”

Although the suit takes issue with an opinion column, the president has been feuding for years with the newspaper, which he calls the Failing New York Times, claiming his hometown paper is biased against him. The Times has said it is reporting fairly and accurately on one of the most outsize presidents in recent memory.

Special Counsel Robert Mueller, in the April 2019 report on his probe of Russian interference in the 2016 election, concluded there was no evidence the Trump campaign conspired with Russia, although he found that senior campaign officials were open to overtures of Russian help in digging up dirt on Clinton.

The Times published the piece because of its “extreme bias against and animosity toward the campaign, and the Times’ exuberance to improperly influence the presidential election in November 2020,” according to the lawsuit.

The campaign and the White House didn’t immediately respond to requests for comment on the suit.

The company is also facing a suit by former Alaska governor Sarah Palin over a 2017 editorial that linked her to the 2011 shooting of Gabrielle Giffords, then a U.S. congresswoman from Arizona. That suit, which was thrown out by a federal judge but revived by an appeals court last year, is scheduled to go to trial in June.