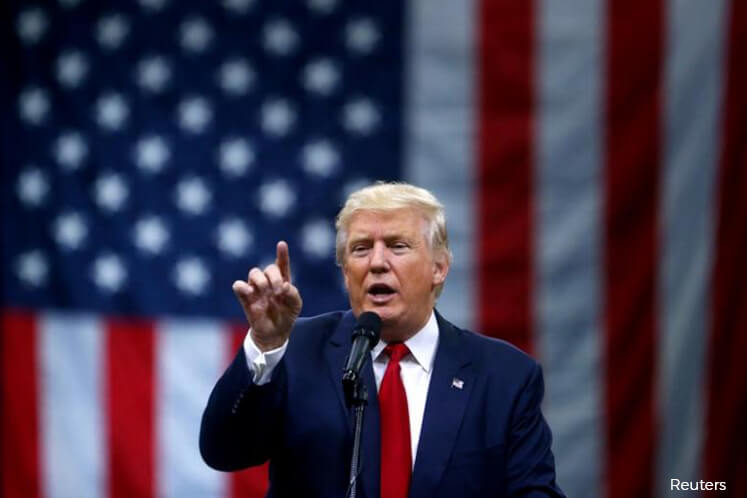 WASHINGTON (March 21): The Trump administration is considering sweeping sanctions aimed at cutting North Korea off from the global financial system as part of a broad review of measures to counter Pyongyang's nuclear and missile threat, a senior U.S. official said on Monday.

The sanctions would be part of a multi-pronged approach of increased economic and diplomatic pressure – especially on Chinese banks and firms that do the most business with North Korea – plus beefed-up defenses by the United States and its South Korean and Japanese allies, according to the administration official familiar with the deliberations.

While the long-standing option of pre-emptive military strikes against North Korea is not off the table – as reflected by U.S. Secretary of State Rex Tillerson's warning to Pyongyang during his Asia tour last week - the new administration is giving priority for now to less-risky options.

The policy recommendations being assembled by President Donald Trump's national security adviser, H.R. McMaster, are expected to reach the president's desk within weeks, possibly before a summit with Chinese President Xi Jinping in early April, the official said, speaking on condition of anonymity. North Korea is expected to top the agenda at that meeting.

It is not clear how quickly Trump will decide on a course of action, which could be delayed by the slow pace at which the administration is filling key national security jobs.

The president spoke hours after North Korea boasted of a successful rocket-engine test, which officials and experts think is part of a program aimed at building an intercontinental ballistic missile capable of hitting the United States.

The administration source said U.S. officials, including Tillerson, had privately warned China about broader "secondary sanctions" that would target banks and other companies that do business with North Korea, most of which are Chinese.

The move under consideration would mark an escalation of Trump's pressure on China to do more to contain North Korea. It was not clear how Chinese officials responded to those warnings but Beijing has made clear its strong opposition to such moves.

The objective would be to tighten the screws in the same way that the widening of sanctions - to encompass foreign firms dealing with Iran - was used to pressure Tehran to open negotiations with the West on its suspected nuclear weapons program. That effort ultimately led to a 2015 deal to restrict Iran's nuclear program in return for sanctions relief.

For such measures to have any chance to influence the behavior of North Korea, which is already under heavy sanctions, Washington must secure full international cooperation - especially from China, which has shown little appetite for putting such a squeeze on its neighbor.

Analysts also have questioned whether such sanctions would be as effective on North Korea as they were on a major oil producer such as Iran, given the isolated nation's limited links to the world financial system.

North Korea has relied heavily on illicit trade done via small Chinese banks. So, to be applied successfully, the new measures would have to threaten to bar those banks from the international financial system.

Also under consideration are expanded efforts to seize assets of Kim and his family outside North Korea, the official said.

The military dimension of the review includes a strengthened U.S. presence in the region and deployment of advanced missile defenses, initially in South Korea and possibly in Japan. The U.S. military has begun to install a Terminal High Altitude Area Defense, or THAAD, system in South Korea, despite Chinese opposition.

Washington is increasingly concerned, however, that the winner of South Korea's May 9 presidential election might backtrack on the deployment and be less supportive of tougher sanctions.

Tillerson warned on Friday that Washington had not ruled out military action if the threat from North Korea becomes unacceptable.

For now, U.S. officials consider pre-emptive strikes too risky, given the danger of igniting a regional war and causing massive casualties in Japan and South Korea and among tens of thousands of U.S. troops based in both allied countries.

"These options are not done as stand-alones," the first U.S. official said. "It's going to be some form of 'all of the above,' probably excluding military action."

Trump is known to have little patience for foreign policy details, but officials say he seems to have heeded a warning from his predecessor, Barack Obama, that North Korea would be the most urgent international issue he would face.

In his North Korea briefings, Trump has asked repeatedly how many nuclear warheads and missiles Pyongyang has, at the same time as demanding to know how much South Korea and Japan are paying for their own defense, one U.S. official said.  - Reuters