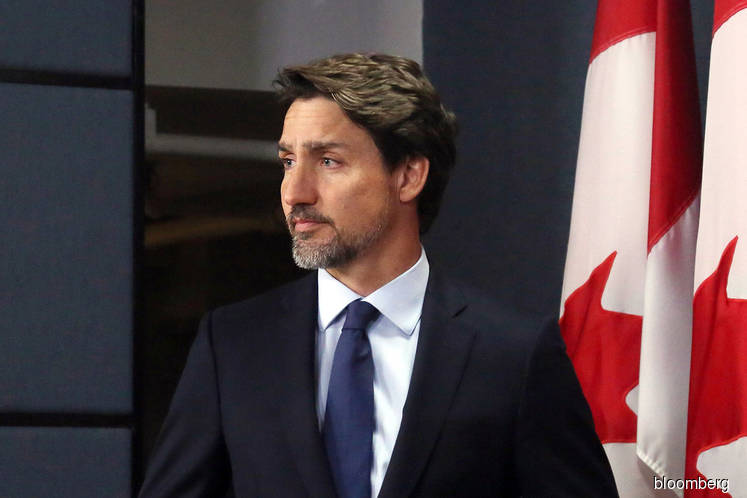 (Jan 10): Canadian Prime Minister Justin Trudeau said evidence suggests that a Ukrainian jet was hit by an Iranian missile before it crashed in Tehran and called for an international probe of the disaster.

“We have intelligence from multiple sources, including our allies and our own intelligence. The evidence indicates that the plane was shot down by an Iranian surface-to-air missile,” Trudeau told reporters in Ottawa. “This may well have been unintentional.”

More than a third of the 176 people aboard Ukraine International Airlines Flight 752 were from Canada when it plunged from the sky about two minutes after a pre-dawn takeoff. The Boeing Co. 737-800 was on fire, according to witnesses on the ground and in other aircraft cited in a preliminary Iranian report on the crash.

Whether accidental or intentional, a shoot-down would echo two other instances of surface-to-air missiles knocking down civilian jets. Curiously, Iran and Ukraine were involved in the previous episodes.

In 2014, pro-Russian rebels in Ukraine fired on and destroyed a Malaysian Air jetliner. In 1988, an Iranian airliner was felled by a U.S. cruiser after being mistaken for a hostile intruder following a skirmish with Iranian boats.

U.K. Prime Minister Boris Johnson said in a statement there is evidence Flight 752 was shot down by an Iranian surface-to-air missile.

“We are working closely with Canada and our international partners and there now needs to be a full, transparent investigation,” Johnson said.
The New York Times
@nytimes
Exclusive: Video verified by The New York Times shows a Ukrainian airliner being hit over Tehran on Wednesday nyti.ms/39TCI81

U.S. President Donald Trump, speaking to reporters in Washington on Thursday, said “I have my suspicions” about why the plane went down but said he didn’t want to say what those suspicions are.

“It was flying in a pretty rough neighborhood,” Trump said. “Somebody could have made a mistake.”

Two surface-to-air missile launches were detected from an Iranian battery minutes after the jet took off, followed by an explosion near the plane, said one person familiar with the investigation who spoke on the condition of anonymity.

Ali Abedzadeh, head of Iran’s Civil Aviation Organization, said “it’s not possible” for an Iranian rocket to have hit the plane.

“There’s a very defined relationship in Iran between military and civilian structures and its based on the regulations of the international civil aviation authority to which we comply, like all other countries,” he said in an interview on Iranian TV.

Two SA-15 missiles are suspected of crippling the jet, said one of the people. The Russian-made missile, also known as a Gauntlet or a Tor, is a short-range weapon designed to attack planes, helicopters and other airborne targets. The launches were detected by a U.S. spy satellite and occurred from a known missile battery near the airport, the person said.

Boeing rose as much as 3.1% and traded up 1.5% to $336.44 at 3:57 p.m. in New York on the news. If the plane was brought down by a missile strike it could rule out a mechanical failure that would affect other Boeing planes.

“Our country is interested to find out the truth,” the Ukrainian president’s office said in a statement. “So we address all Ukraine’s international partners: if you have evidences that can help the investigation, please provide them.”

It said 45 Ukraine experts were working in Iran on the investigation and there are “several versions” for the cause under consideration.

The U.S. intelligence assessment is consistent with what some aviation accident experts have said. The apparent rapid spread of the fire combined with the sudden halt of radio transmissions from the plane after a normal climb aren’t consistent with previous crashes, said Jeffrey Guzzetti, the former head of accident investigations at the Federal Aviation Administration.

While Iranian officials initially said they suspected a problem with one of the plane’s engines, they retracted that in a preliminary report issued Thursday. The government also took the unusual step of setting up an investigative group to examine whether “any unlawful actions” initiated the fire on the plane, the preliminary report said.

Iran notified the International Civil Aviation Organization, an arm of the United Nations, about the crash, which should trigger involvement of other nations in the investigation, including the U.S., the agency said in a press release Thursday.

Under rules known as Annex 13, the nation in which a crash occurs usually is in charge of an investigation. Other nations are permitted to take part, such as the country in which the plane was made. Since Boeing manufactured the Ukrainian jet, the U.S. National Transportation Safety Board would have a right to participate.

“Ukraine, as the operator country of the plane is obliged to cooperate with us and share the plane’s necessary data for investigation,” Adelzadeh, the Iranian aviation official, said in a TV interview Thursday. “Others can also join in investigations.”

He said France, where portions of the engines were made, the U.S. and Canada, due to its loss of life on the plane, had all been notified and can take part.

“France, Canada and the NTSB of the United States have expressed their readiness and introduced their representatives for cooperation,” he said.

NTSB spokesman Chris O’Neil declined to comment about whether Iran has reached out to the agency. The NTSB in a statement on Wednesday said it was monitoring the situation and consulting with other agencies about whether it could participate.

U.S. restrictions on dealings with Iran prevent it from taking part. The U.S. Treasury has granted waivers for U.S. investigators to work in Iran in the past, but it has been a cumbersome process. Also, the NTSB has at times declined to send investigators to countries it deems unsafe.