Trouble with the throne

The Empress of China is making headlines.

For one, it marks the comeback of China A-lister Fan Bingbing to the small screen after a six-year hiatus.

Second, most of the female cast in this imperial court drama — servants, concubines and consorts — don cleavage-baring costumes, said to reflect the openness of seventh- and eighth-century Tang Dynasty, and possibly the reason behind stirred-up discussions and boosted ratings.

And third, the show was suspended seven days after being aired on Hunan TV over “technical glitches”.

It was revived on Jan 1 — with cleavage-exposing scenes censored, believed to be under the directive of the Chinese authorities. Netizens quickly observed that all the characters were “flat-chested”, and lamented that the editing was out of proportion as most scenes zoomed into the actresses’ faces.

Regardless of the controversies, The Empress of China looks set to be the most viewed and most talked about Chinese series this year.

It follows the life of Wu Zetian — the only female empress in Chinese history — from the beginnings of her imperial life as a 16-year-old concubine to Emperor Taizong, through to the end of her rule. 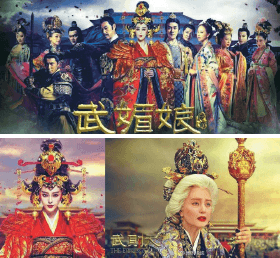 It follows her trials of power, love and politics, her winning over of Emperor Gaozong, and then her dominion over the throne from the age of 66. Wu ruled during the self-proclaimed “Zhou Dynasty” from 690 to 705 and was thought to be a strongly opinionated woman who was fierce and ruthless. She died at the age of 82.

The series made its debut on Hunan TV on Dec 21 last year, and it was the highest rated premiere of a drama in China.

There is little doubt about its success as The Empress of China follows in the footsteps of previous Chinese historical dramas which detail the infighting among emperors’ siblings and concubines.

It was reported that the production investment for the 85-parter was a sky-high 300 million yuan (RM172 million). Hong Kong’s TVB snapped up the broadcasting rights at a hefty price, to air the drama over prime-time slots in February.

Heading a string of gorgeous and popular actresses, Fan, 33, takes the limelight. The first Asian to appear in the X-Men franchise — in X-Men: Days of Future Past — she doubles as the central character and the producer for The Empress of China.

Having invested eight months in the project, Fan says: “This is a dream role for every actress, and regardless of how much time it might have taken, it was worth the effort.”

The Qingdao-born beauty was No 1 in the 2014 Forbes China Celebrity 100 list, raking in an annual income of 122 million yuan. She beat Hong Kong’s Andy Lau and Taiwanese Mando-pop singer Jay Chou.

Hong Kong actress Kathy Chow Hoi-mei, 48, is a familiar face, having starred in many hit TVB dramas in the 1990s. The former Miss Hong Kong pageant participant, who is divorced from veteran actor Ray Lui Leung-wai and was romantically linked to Canto-pop king Leon Lai, left for China in the early 2000s to develop her career in the mainland. Chow plays one of the consorts and was not coy about showing off her hourglass figure in the series.

Taiwanese actress Chang Ting, 44, on the other hand, is the only “modest” supporting actress whose costumes stayed above her bosom. She started out by acting in Taiwanese television commercials at just 19, and her dimpled sweet looks put her firmly ahead in the Taiwan TV industry until she faded out on venturing into the real estate business in China with ex-actor husband Lin Rui-yang.