A trip to the top of the world 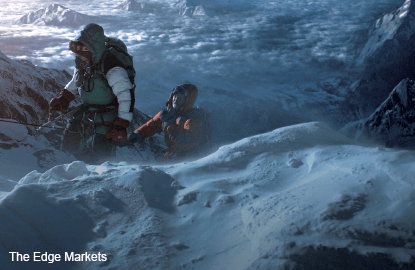 If there was ever a movie that is worth watching in IMAX 3D, Everest would be it. This exceptionally well-captured film pays homage to those who dared, centering on the tragic but incredible events of the historical 1996 climb that then recorded the highest number of deaths in one day. Focusing on New Zealand mountaineer Rob Hall and his renowned company Adventure Consultants, the movie pieces together the events surrounding his and his team of climbers’ ascent and subsequent descent from the world’s tallest mountain peak, as a deadly storm wreaks havoc.

Everest sets itself apart from films of its genre in several ways, most notably in its approach. Films of this kind are never an easy watch, but Icelandic director Baltasar Kormakur (2 Guns, Contraband) crafted a film that is not so much disaster-driven but rather a re-enactment, drama, tribute and adventure all rolled into one. The result is an engaging and rather heartfelt experience, commendably avoiding the temptation of over-sensationalising, which actually makes the re-imagining overall more gripping.

This proves a well-thought out movie, considering that one based on true-events is notoriously difficult to get right — what more a story as fragmented as the 1996 tragedy, known for its conflicting accounts and for a long time after, engulfed in controversy.

The idea of the movie first took root when producer Tim Bevan read journalist Jon Krakauer’s account of the May 1996 events in his bestselling book Into Thin Air, which was also made into a tele-movie. Krakauer (played by Michael Kelly in the film), was part of the group that climbed Everest with Adventure Consultants, though he was not consulted on the making of the movie, and has remained silent on it since its release.

But Everest is not just based on Krakauer’s version of the story of what happened on May 10, 1996. Instead, it paints a broader story of the different individuals and groups, as well as incorporating their perspectives. Among accounts drawn from includes that of fellow survivor Beck Weathers (Josh Brolin), the Texan pathologist who penned Left For Dead: My Journey Home from Everest about his miraculous revival and subsequent dramatic rescue via helicopter, as well as the transcript of the final satellite phone conversation between Hall (Jason Clarke) and his wife, Jan Arnold (Keira Knightley).

Also portrayed in the film is Scott Fischer (Jake Gyllenhaal), who ran a rival company to Hall’s, though both were pioneers in the commercialisation of climbing on Everest.

Kormakur’s direction successfully utilises the wonders of technological advancement to bring the audience on a breath-taking journey up the mountain, a view most of us will not see in our lifetime. With the help of Guy Cotter (Sam Worthington), one of Hall’s best friends and who currently leads Adventure Consultants, the mountain’s elements and psyche of the climbers are also realistically captured.

There is an underlying sense of respect and openness in Everest, as the story is allowed to unfold without hurry, and there is no message being shoved down our consciousness. On the flip side, the profound question Krakauer asks the climbers come to mind: Why do they do it?  After 121 minutes, there isn’t really an answer. For some, it would be what falls short for this film. Nevertheless, Everest leaves us refreshingly in awe of the world’s tallest mountain and those who tried to conquer it.