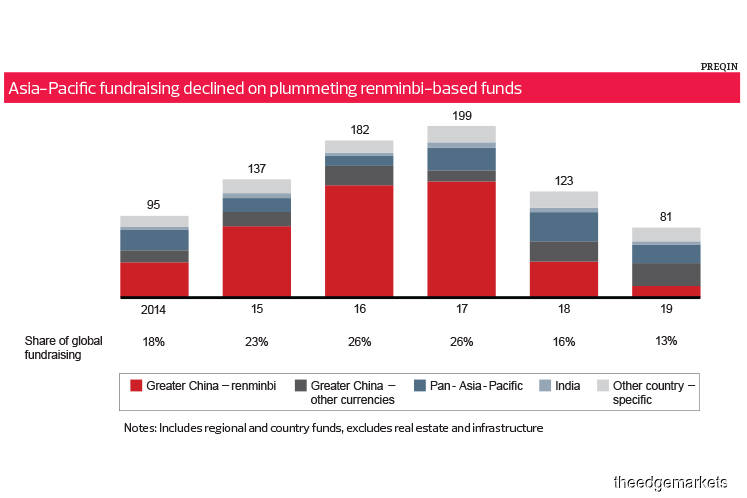 Private equity (PE) investments in Asia-Pacific declined last year after record highs in 2017 and 2018. Nevertheless, investment returns remained strong and the asset class was still a popular source of capital in the region. These were some of the findings in Bain & Co’s Asia-Pacific Private Equity Report 2020.

According to reports, deal value in Asia-Pacific decelerated sharply last year — down to US$150 billion from US$178 billion in 2018 and US$159 billion in 2017. The decline was driven by China, which has been the focal point for a host of macro issues. These, in turn, created a slowdown in deal activity and fundraising.

Domestic factors played a large role in China’s reversal, says Bain & Co in its latest report.  Real GDP growth in 2H2019 slowed to 6%, the lowest in a decade. The ongoing low level of renminbi-based fundraising further undercut investment activity by reducing dry powder. Trade tensions with the US and social unrest in Hong Kong undermined the economy and with it, investor confidence. That said, deal activity in India and other regional markets grew or were on a par with their numbers over the past five years.

Exits in the region dropped even more precipitously than deal value. After setting new highs in 2018, Asia-Pacific’s exit market plunged last year, breaking the recycling of capital that would fuel the next investment phase. Exits plummeted 43% last year from record highs in 2018. Overall, fundraising in 2019 was nearly half that of the historical five-year average. This was attributed to a poorly performing IPO market, soft macroeconomic conditions and a significant trim down of portfolios from the boom years of 2017 and 2018.

“Macro conditions have shifted the balance of PE power in Asia-Pacific. China, while still dominant, has contracted and macro softness was the No 1 factor that kept PE funds focused on Greater China awake at night. The ongoing concerns surrounding the Covid-19 outbreak in the region and globally are also clearly affecting the 2020 dynamic,” Kiki Yang, co-lead of Bain’s Asia-Pacific PE practice and co-author of the report, says in a statement.

Although the core of large and experienced funds raised capital with ease, Asia-Pacific-focused fundraising overall continued its decline last year. The drop was mainly the result of China’s stringent asset management rules, which were introduced in 2018 and continue to limit the ability of Chinese general partners (GPs) to raise renminbi-based funds.

In comparison, four other Asia-Pacific markets had a strong 2019. Deal value in South Korea outperformed its 2014 to 2018 average by 36%. Australia-New Zealand deal value rebounded 18% while that of Southeast Asia as a whole rose 19% to US$12 billion. The region saw the highest deal count ever and strong deal value, propped up by Vietnam, Malaysia and the Philippines.

Deal value in Japan was slightly below its five-year average. However, it was still 144% above 2018, when investment activity fell sharply as a result of fewer large deals and investors’ inclination to hold high-quality assets instead of selling in a difficult market.

Despite declining investments, returns in the region remained strong, with the top quartile of Asia-Pacific-focused funds forecasting a net internal rate of return (IRR) of 16% or higher. In addition, PE outperformed public-market benchmarks by at least six percentage points across one, five, 10 and 20-year periods.

Looking ahead, widespread uncertainty in financial markets, exacerbated by the coronavirus outbreak in China, trade frictions and macroeconomic risk are forcing firms to adapt in order to survive. In addition, elevated prices, increased competition and limited exit opportunities could make it tougher for GPs to replicate the same level of returns as in the past few years.

With the risk of a global recession increasing, the report identified four characteristics of PE firms that successfully weathered the last financial crisis: they favoured more deal control and active portfolio management; firm size did not matter, but winners targeted larger deals; firms did not have a specific sector focus and they adopted aggressive time management.

Technology continues to be the mainstay investment target, although some caveats apply in the current economic climate. While China was the key driver of technology investments, India is now the biggest player in the sector, representing nearly a third of the Asia-Pacific market, up from 14% in 2015.

India’s internet and technology sector is the second biggest in the region and is rapidly expanding. The growth is fuelled by abundant access to venture capital, ample dry powder, growing internet penetration, falling prices for data and innovative start-ups. Last year, India’s internet and tech sector represented 28% of the Asia-Pacific market, double its share in 2015.

Investors have also focused on the more resilient technology subsectors. While much of the earlier boom was built around first-generation technologies — traditional software, e-commerce and business-to-consumer online services — investors are now eyeing faster-growing, next-generation technologies such as software as a service (SaaS), artificial intelligence and cross-sector technologies, which include financial technology (fintech). These sectors offer quick opportunities to scale, stable recurring revenue and the ability to disrupt entire industries.

SaaS technologies, for example, offer businesses huge advantages over first-generation software systems. These include minimal upfront capital investment, automatic access to the latest version of the software, less time spent keeping up with new types of hardware and simple integration with existing systems or platforms.

Similarly, marketing tech start-ups are harnessing web analytics to give sales a jolt. Asia-Pacific-focused PE funds, in search of disruptive products and services, are betting on what the report refers to as cross-sector technologies. On this point, the number of deals in cross-sector tech companies in 2019 was a third higher than the five-year average. These technologies are attractive because companies can scale them rapidly, create broad product ecosystems that boost profitability and, in some cases, disrupt entire industries.

As Asia-Pacific consumer demand for digital services increases, so too will the demand for cross-sector technologies. Successful PE firms choose an investment strategy that provides the quickest path to profitability. One option is developing a core business model that includes an array of related offerings. Another approach is to disrupt a traditional industry process or solution. Digital payment systems, for example, aim to be smoother and easier to deploy than bank-based systems.

However, even these next-generation technology sectors were not spared in the recent fall in PE investment prospects. A combination of investors chasing deals and pushing prices higher; a slowdown in exits, leaving funds with an overhang of assets; and weak IPO markets tend to result in a decline in market capitalisation post-listing.

According to the report, the majority of investors polled were worried that the region’s overheated internet and technology sector would suffer a sharp correction. Nearly all expect the correction to take place in the next two years, while one in six believe the bubble will burst in the next 12 months.

Also, 33% of companies that went public in the past two years lost 30% of their value, compared with only 12% in 2016 and 2017. The negative IPO results stoked uncertainty among investors. A fifth of GPs say poor IPO outcomes significantly influenced their planned holding periods and expected returns.

While the majority of PE firms surveyed remained positive about future returns, an increasing number of GPs were sensing the start of a downward trajectory, with fewer attractive deals in the market. Nearly all investors were concerned about a global downturn and the potential disruption posed by trade frictions. But there are also opportunities to take advantage of during these periods of uncertainty.

Going forward, the best firms will seek greater control over deals, taking an active approach to managing portfolio companies. In particular, GPs in Asia-Pacific are shifting their focus to next-generation internet and technology companies. PE firms that develop the skills to reduce their risks and increase opportunities in an uncertain business environment will be in a stronger position to navigate the challenges that lie ahead.