Trends: Finding your way in a wild new world 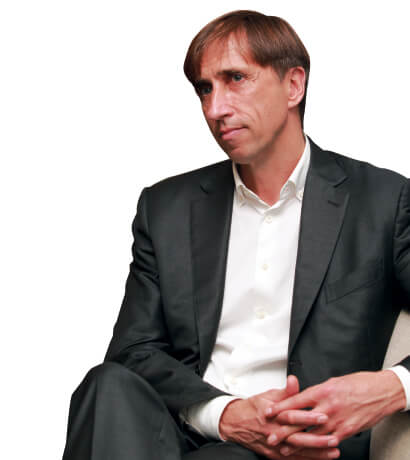 It is not easy. But you try, you learn, you fail, you learn and you do it again. Then, you become better. > Plötner. Photo by Haris Hassan/The Edge

Established players are finding smaller companies snapping at their heels. There has never been a better time to disrupt those long entrenched in their industries.

The smarter companies are reacting swiftly to ensure they remain relevant. They do this in one of two ways — either simplifying their products to the point that they can compete with the newcomers on price or using data technology to sell solutions rather than just products.

Prof Olaf Plötner, dean of executive education at ESMT Berlin (one of the top executive education schools in the world), specialises in strategic management in global business-to-business (B2B) markets. His recent book, Counter Strategies in Global Markets, encapsulates much of his research.

“The German economy is strongly driven by technology. Our number one export is cars and this includes trucks. The number two sector is machines that support production. We also have some consumer goods and services, but we are not famous for this,” he says.

The biggest driver of the German economy is gas turbines, trucks and paper machines, he adds. “I am just a little closer to these kinds of industries. Maybe because I am German and I grew up in this environment.”

Plötner has watched these traditional markets being attacked by companies from new or emerging markets, especially China. “What do you do when you are attacked? How do you react so you do not produce losses in the future but continue to make profits?”

He says many companies approach disruption in the wrong way. “Very often, people think that the whole revolution for Western companies is only in having very innovative, fancy products.”

But the opposite may be true, he opines. “One option is that when you are attacked, you don’t go fancy, you go simple.”

Think about it. The largest growth areas in the world are the emerging markets and they are sensitive to cost. “They are less willing to pay than developed countries; they expect lower prices. So, if you continue to sell only premium products, you may miss out on something,” he says.

Plötner cites BMW as an example. “They sell more and more in emerging countries, but the biggest demand in the car markets of these countries is for vehicles that cost between US$6,000 and US$12,000. And BMW does not have a product in this price range. Companies with cars in this price range experience higher growth in these markets than those with premium cars, in absolute figures.”

What does this mean? “If you are General Electric or Siemens and you want to enter the African market, you cannot sell the same steam turbines you see in the more industrialised markets. In these emerging markets, you will have to develop products that fit better with the customers’ willingness to pay.”

Disruptors from emerging markets include companies such as Huawei. “It has already covered the markets in emerging economies where cheap is more important than premium quality. Then they go to Western countries with better products, or what we call ‘good enough’ products, and they are able to enter,” says Plötner.

“What should companies that are being attacked in their home markets do? Well, one counter strategy would be to address Huawei’s markets in emerging economies and develop switches that cost less.”

But it is a big cultural challenge for a premium-product company to enter a low-cost market. “It is not easy. But you try, you learn, you fail, you learn and you do it again. Then, you become better,” says Plötner.

In his book, he includes a case study on Siemens and its fire safety system. “The company does building technology and has fire safety systems. In premium markets such as the US or Germany, a single smoke detector costs US$22. But if it wanted to enter the Chinese market, those customers would only be willing to pay a maximum of US$7 per smoke detector.”

“The company developed, produced and sold it in China. They could have never achieved US$7 if the product had been developed at their German headquarters,” says Plötner.

The second option is to build up your value and go from selling ordinary products to more intelligent, complete solutions driven by the most advanced technology and data management.

“This is what Siemens is doing with Credit Suisse. The latter has more than 1,000 offices, so you could go to each and say, ‘Please buy our heating systems, or air-conditioning systems, or fire-safety systems’. Instead, it went to Credit Suisse and said, ‘If by whatever we do, we are able to reduce your energy consumption costs, we would like to have a share of this money,” says Plötner.

“This is a new business model. You still use your products. But it is not the products you sell, it is the solution.”

Plötner says this is the most effective counter-strategy. For instance, a German truck company has stopped selling trucks per se. “Instead, it goes to a customer and says, ‘Let us optimise your logistics process. We will take fleet management into our own costs. And we will tell you how to optimise your cost structure because we have so much data.

“A truck today is a data machine. So that means you increase your value-add. It is more than a truck. It is a transport solution for the customer to optimise its costs.”

Rolls-Royce was one of the pioneers of this approach. “In 1962, it introduced the business model known as ‘power by the hour’. It would go to an airline and say, ‘We don’t sell jet engines anymore. We sell the transport of your plane. And if our jet engines transport your passengers, we get money for this, power by the hour’,” says Plötner.

That gave Rolls-Royce the added impetus to ensure that the jet engines were always in top condition. “It was not paid when the plane was grounded, only when it was up in the air.”

About 10 years ago, the company added another layer to this. With great advances in data technology, it installed 3,000 sensors on the turbine so that it could monitor the health of the engine and fix a problem before it happens.

Instead of waiting for this to happen, Rolls-Royce would bring the spare parts to whatever airport the plane was at and fix it. “It makes a lot of sense to replace the blade before it breaks to save time. In the old days, if a blade breaks when the plane is running, it has to be grounded until the spare part arrives, which wastes a lot of time. So, you can optimise this by doing what these guys call proactive maintenance,” he says.

But here is the problem. Most of these companies sell their products with very slim margins and only clean up when they sell spare parts as their profit margins are considerably higher. So, why should an airline believe a company like Rolls-Royce when it says a part needs to be changed?

That is why there is a growing number of performance-based pricing models. “This is based on data technology. A supplier, such as Rolls-Royce, knows how to better optimise the repair and maintenance of a jet engine than an airline like Lufthansa because Lufthansa only has 800 jet engines while Rolls-Royce has 80,000. So, the latter has more knowledge based on the data. It knows the probability of a blade breaking based on the vibrations it produces,” he says.

So, companies can either enrich their offerings or make them simpler and more cost-effective. “Companies such as GE and Siemens still have their premium products, but they also

And this is how you defend your turf.