Trees to represent MH17 victims in memorial near Amsterdam airport 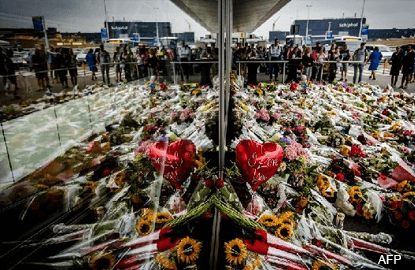 (Nov 27): A forest is to be planted in a park close to Amsterdam's Schiphol airport to commemorate the victims of downed flight MH17, the organisation representing victims' families announced Thursday.

The national monument will comprise 298 trees, one for each of the victims of the ill-fated flight, the MH17 Disaster Foundation said in a statement.

"The next-of-kin have expressed the preference to place the national memorial in Vijfhuizen" near Schiphol, the foundation said.

The families could vote for three locations with more than half preferring the park to other possible sites in The Hague and the southern Dutch city of Eindhoven.

The trees will form a giant green ribbon, a symbol worn by the relatives to commemorate the July 17, 2014 disaster, with an amphitheatre at the centre.

Three proposals were unveiled earlier this month for monuments to honour the victims, mostly Dutch nationals, killed when the plane came down in eastern Ukraine.

A majority of relatives voted for the park project as Schiphol "is the place where the victims boarded the plane for the last time," Dutch media reported.

The trees will be lit up at night and will be surrounded by sunflowers in bloom every year on July 17, which will radiate in a "golden glow" said the National Forest Fund foundation, which designed the project.

"We had a wish to make this shared loss visible by creating a living monument," it said on its website.

"We wanted to create a place where memories can live on, a place where victims can be remembered and cherished by their loved ones."

Dutch-led investigators concluded last month that the Malaysia Airlines flight was shot down by a Russian-made BUK missile fired from rebel-held territory in eastern Ukraine.

All those on board died when the Boeing 777 was blown out of the sky en route from Amsterdam to Kuala Lumpur.

After meeting with Prime Minister Mark Rutte, Poroshenko said a separate criminal investigation into the crash was making progress.

"I hope in the middle of December, at least before the end of the year, we will have important information with the evidence about who... is responsible for this disastrous terroristic attack," he said.

Rutte vowed investigators were "working day and night" to be able to pinpoint exactly who was to blame for the disaster. – AFP