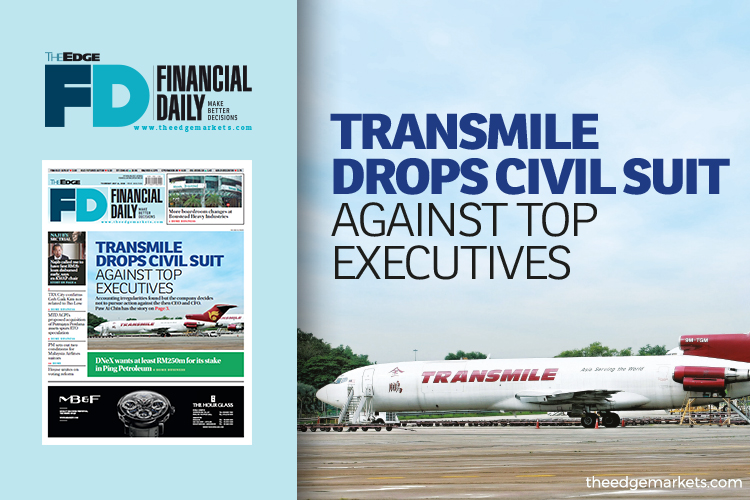 The firm was embroiled in an accounting scandal 15 years ago that was viewed as one of the worst corporate scandals in recent corporate history.

The withdrawal came after the decision by shareholders at the company’s extraordinary general meeting last month. However, the rationale to drop the lawsuit was unknown at press time.

It is also not known which shareholders supported the decision to withdraw the lawsuit.

Rodney said a Notice of Discontinuance was filed in the High Court yesterday, and High Court Judge Datuk Ahmad Bache gave no order as to costs.

Air cargo firm Transmile filed a civil suit against Boon Aun and Lo for failing in their duties and trust towards the company in April 2010.

Boon Aun, currently facing criminal charges related to the accounting scandal, and Lo were named the first and second defendants in the suit.

In 2010, Transmile claimed Boon Aun and Lo had breached their duty of fidelity and trust to the company by grossly overstating its revenue and making questionable payments and receipts pertaining to transactions between Transmile’s two wholly-owned subsidiaries — Transmile Air Services Sdn Bhd and Grouptech Sdn Bhd — and several third parties.

Transmile also claimed the defendants breached their duty of care for failing to put in place proper internal controls. In the same suit, Boon Aun was named solely for breach of fiduciary duty.

The company is claiming for damages to be assessed and paid by the defendants and/or by each of them in such proportion as may be determined by the High Court. It is also claiming RM10.6 million in special damages from the duo.

To recap, in April 2007, Transmile’s external auditor Deloitte found something amiss in the company’s accounts and refused to sign off the financial year 2006 (FY06) accounts due to a lack of supporting documents for certain transactions.

Subsequently, Transmile’s revenue was found overstated by more than half a billion for FY05 and FY06. An investigation was launched and a special audit conducted.

In July 2007, Boon Aun, Lo and Khiudin were charged with abetting the company in making a misleading statement to Bursa in its quarterly report. The trio claimed trial.

In May 2008, the prosecution withdrew the charge against Lo after he paid a compound of RM700,000. Khiudin was acquitted of the charge in 2016.

Boon Aun was called to answer his case by the Sessions Court on March 16, 2011. The trial of the case before Judge Hasbullah Adam will resume on Oct 22 and 23.