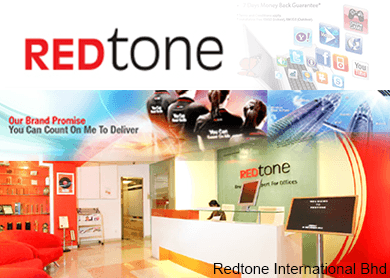 KUALA LUMPUR (Mar 27): The trading in the securities of Redtone International Bhd has been suspended on the Ace Market from 2pm to 5pm today, pending a major corporate exercise, which would be released by today.

In an announcement with Bursa Malaysia this afternoon, the telecommunication service provider said that this was after its request to Bursa for the suspension.

“Redtone has given notice on its intention to undertake a major corporate exercise involving Redtone and it intends to release the material announcement on the said exercise by Mar 27, 2015.”

Notably, both the Sultan of Malaysia’s Johor and Tan Sri Datuk Seri Vincent Tan Chee Yioun had been acquiring more shares in the company last week.

According to a filing dated Mar 16 with Bursa Malaysia, Redtone said that the Sultan of Johor had raised his stake in the company to 20% from 4.8% after converting warrants into stocks and buying shares in the open market.

Sultan Ibrahim Sultan Iskandar had been accumulating shares in Redtone for the past one year, the company noted in a press statement dated Mar 16.

Announcements to Bursa revealed that Tan had also been acquiring stakes in Redtone through a private vehicle named Juara Sejati Sdn Bhd.

The latest acquisition of six million shares in Redtone by Tan was done through open market on Mar 12. He now holds a direct stake of 28.29% in Redtone as compared with a 13.84% stake in Nov 6 last year.