GOLDIS BHD appears to have achieved its objective of raising its direct interest in IGB Corp Bhd from 32.64% to over 50% despite the independent adviser’s recent recommendation to the latter’s shareholders to reject the offer of RM2.88 per share, which it views as “not fair and not reasonable”.

This is because the outstanding parties acting in concert (PAC) that Goldis has yet to obtain an irrevocable undertaking to accept the offer from — Wang Tak Co Ltd and Wang Tak Majujaya Sdn Bhd — recently announced that they would accept the offer, ignoring the independent adviser’s recommendation.

Lee Hing is considered a PAC because one of its major shareholders — Tan Boon Seng — who is also the managing director and chairman of the company, is related to the Tan family, which controls Goldis and IGB.

According to its offer document dated Oct 3, Goldis and the PACs have 32.64% and 19.54% interest in IGB respectively. The document adds that PACs representing 17.3% interest in IGB accepted the offer. This means that  Goldis has accumulated a 49.94% stake. Including Lee Hing’s acceptance, Goldis’ interest in IGB would exceed 50%.

Lee Hing’s shareholders approved the sale of its IGB stake in an extraordinary general meeting on Aug 25, and the opinion of the independent adviser — RHB Investment Bank Bhd — will not change that.

Last Monday, Lee Hing announced that it has decided to accept the proposed offer, although the independent adviser and the non-interested directors of IGB are of the view that the shareholders should reject it.

This, it said, is due to a number of factors, including the fact that the proposed offer is a good opportunity and a practical route for the company to realise its investment in IGB in a single transaction.

Lee Hing will make a gain of about RM42 million from the disposal.

Another factor, which industry observers say is a major one, is that Wang Tak Co and Wang Tak Majujaya own a combined 15.7% stake in Goldis and, therefore, Lee Hing would be able to enjoy the benefits of accepting the takeover offer of IGB, which will be gained by Goldis upon completion of the deal.

Indeed, if Goldis raises its stake in IGB to over 50%, this would bump up its books.

Goldis has said that the proposed offer provides it an opportunity to obtain a significant block of shares by increasing its direct interest to over 50% at a “reasonable cost” in a profitable entity that had generated steady growth in earnings and provided a stable dividend flow.

“In the financial years ended Dec 31, 2011, and 2013, IGB registered profits before tax of RM357.5 million and RM404.6 million respectively, representing a compounded annual growth rate of 6.4%. Similarly, in the same financial periods, Goldis and its subsidiary have received a consistent flow of dividends from IGB, amounting to an average of RM23.5 million per annum,” says Goldis in its Oct 3 offer document. The first closing date of the offer is Oct 29.

IGB worth so much more Goldis’ offer of RM2.88 per share for IGB is a price that industry observers say “grossly undervalues” the company.

“Goldis will be increasing its stake in IGB at a very good price from a buyer’s perspective,” says an analyst. The offer price of RM2.88 is only at a 1.4% premium to the closing share price on July 17 and at a 9.5% premium to the one-year volume-weighted average market price of the shares up to and including July 17 when trading in the stock was suspended and the offer was announced the next day. It is also at a 13.3% discount to IGB’s net asset value of RM3.32 as at June 30, 2014.

Recently, it upgraded IGB to “outperform” from “neutral” and raised the target price of the stock to RM4.80 from RM2.88.

Public IB Research has estimated IGB’s revised net asset value at RM6.90 while the independent adviser has pegged the company’s RNAV at RM5.33.

Should Goldis trade higher with a larger stake in IGB?

Calculations on the back of an envelope show that based on an RNAV of RM5.33 per IGB share, Goldis’ potentially higher stake of at least 51% is worth RM3.63 billion, translating into RM5.97 per share. This is more than double its closing price of RM2.20 last Thursday.

It is worth noting, however, that trading in the counter is illiquid.

Meanwhile, Public IB Research says in its report that it believes many other assets of IGB have not been revalued at fair prices yet. 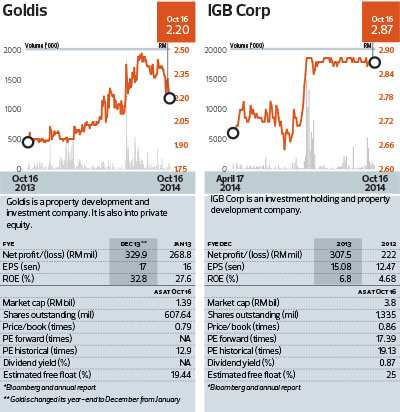