AS many expect the local oil and gas  market to see lacklustre newsflow due to falling crude prices, Yinson Holdings Bhd’s licence awards from Petroliam Nasional Bhd (Petronas) have been a surprise.

Earlier this year, the potential licence awards were seen as a catalyst for Yinson to participate more in the domestic oil and gas industry. Globally, it is the sixth largest FPSO (floating production, storage and offloading) player in terms of fleet size. It has been active in Vietnam and West Africa but not on the home front as it did not have a Petronas licence to bid for jobs.

However, the current depressed oil and gas market may see its development plan being shelved for the time being. To make things worse, Brent crude fell to its lowest level in four years last Friday, closing at US$77 per barrel.

At RM2.60, Yinson’s market capitalisation was RM2.71 billion or at a forward price-earnings ratio (PER) of nearly 23 times, according to Bloomberg. The rich PER is said to be backed by anticipated earnings growth in the financial years ending Jan 31, 2016 (FY2016) and FY2017, after it has realised the full potential of its current fleet of FPSOs.

Still, with oil prices below US$80 per barrel, analysts do not see the Petronas licences doing Yinson much good in the near term.

An industry analyst tells The Edge that the tumbling crude prices will cause oil companies to cut back on exploration, thus reducing the need for FPSOs. “Only when new fields are discovered and enter the production phase will there be a need for new deployment of FPSOs.”

Further, he points out that new FPSO contracts will likely have depressed rates because oil companies are expected to squeeze the rates for their internal rate of return (IRR).

AmResearch’s Wong Joe Vuei, who has a “hold” on Yinson and a fair value of RM2.97, also does not expect much from the Petronas licences in the near term. “We do not expect Yinson to secure jobs within Malaysia anytime soon as project rollouts have been delayed or have slowed down recently amid the low oil prices.

“We note that Bumi Armada Bhd, which is the fifth largest FPSO player globally, is not operating any FPSO vessel in Malaysia currently.”

Wong points out that a more attractive catalyst for Yinson is its ongoing bids for overseas projects. “Catalysts for the group stem from additional FPSO contracts, which the group is currently bidding for, in West Africa and Southeast Asia.”

Nevertheless, the Petronas licences will open up new opportunities for Yinson on the home front. Apart from allowing the company to bid for Petronas jobs, the licences will also serve as strong credentials for the group,  say analysts.

YESB was incorporated in September last year. It has an authorised share capital of RM100,000 and its initial issued and paid-up capital is RM1,000. The company’s principal activities include the provision of marine vessels for charter and marine services.

According to a filing with the Companies Commission of Malaysia, Yinson holds 30% equity interest in YESB while two individuals, Rozlan Md Taha and Iftisham Abdul Aziz, hold a 35% stake each.

Lim is the major shareholder of Yinson with a 35.5% stake, followed by Tan Sri Mokhzani Mahathir’s Kencana Capital Sdn Bhd with 18.55% and the Employees Provident Fund (EPF) with 5.83%. In view of the falling oil prices, the EPF has been trimming its holdings in Yinson in the past month. Its stake was as high as 6.2% on Oct 17. 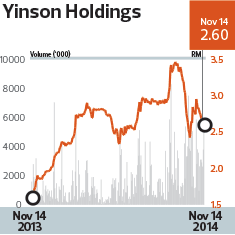 Yinson has grown substantially over the past few years and some quarters believe that the group will expand its business in the oil and gas  industry further.

The game-changing acquisition of Fred Olsen Production (FOP) in June last year marked a turning point for the group.

Currently, Yinson has an order book of US$3.7 billion (RM7.8 billion), which is expected to last it until 2023. The group, having leveraged Fred Olsen’s established presence in West Africa, is also the leading contender for a US$700 million to US$800 million Offshore Cape Three Points (OCTP) FPSO project off the coast of Ghana.