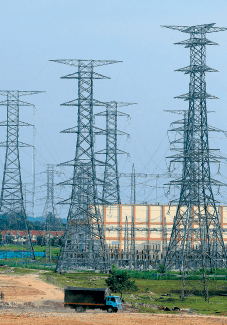 THE sharp fall in crude oil prices that  has pulled down global energy costs had raised hopes that electricity tariffs might subsequently be cut.

However, the Ministry of Energy, Green Technology and Water last week announced that electricity tariffs are expected to remain relatively unchanged for the rest of the year.

This isn’t welcome news for the public, but it bodes well for Tenaga Nasional Bhd (fundamental: 1.3; valuation: 1), whose share price surged 3.99% to close at RM15.10 on Friday after the announcement.

But is the optimism about Tenaga’s earnings premature, or did the ministry miscalculate the impact of lower fuel prices?

According to the ministry, the recent decline in oil prices does not have a direct or substantial impact on Tenaga’s fuel costs. If that is the case, Tenaga’s earnings would not get a boost from lower fuel costs even if tariffs were not revised downwards.

Nonetheless, Tenaga last Thursday unveiled a 34.37% year-on-year jump in net profit for the first quarter ended Nov 30, 2014.  The earnings rise was attributed to a drop in fuel costs as well as the 14.9% effective hike in electricity tariff at the beginning of 2014 that boosted revenue by 15.2% to RM11.03 billion in the same period.

“Crude price has plunged, but that has not yet translated into lower LNG price (up to 6-month lag) as we understand Tenaga’s LNG purchase price in January-March remained firm at RM46.53 per mmbtu (vs RM46.04 in 4QCY14).  However, Tenaga may benefit from lower gas usage in 2QFY15 given a more favourable fuel mix towards hydro and coal, potentially leading to another strong quarter,” writes AllianceDBS in a research report.

“For 4MFY15 (Sept to Dec 2014), coal price averaged US$64 per tonne, 27% lower than the US$87.5 imputed in the existing tariff formula. We expect the coal price to stay low due to oversupply and a weaker demand outlook, which will benefit Tenaga,” it  adds.

If this trend continues and tariffs remain unchanged, Tenaga might be able to book better earnings despite the ministry’s reservations.

That said, these gains could be offset if the government allows Petroliam Nasional Bhd (Petronas) to resume increasing the price of piped natural gas.

Petronas currently supplies about 1,000 mmscfd of natural gas to Tenaga at a regulated price of RM15.20 per mmbtu. The natural gas price is supposed to be increased by RM1.50 to gradually put it on par with the market price under the gas subsidy rationalisation scheme.

Each RM1.50 hike will increase Tenaga’s fuel cost by about RM280 million for a six-month period.

The money would be a welcome boost to Petronas’ revenue a time when it is grappling with low oil prices. Hence, counter-intuitively, Tenaga’s piped natural gas price could actually increase even though crude oil prices are on the decline. To be fair, Tenaga has been enjoying cheap gas for many years at Petronas’ expense in the form of foregone revenue, given that the national oil firm could have exported the fuel at international prices.

Note that in his budget revision speech, Prime Minister Datuk Seri Najib Razak only stated that the piped gas price for industrial use would not be raised, but made no such commitment on gas used by Tenaga for generating power.

“Although the cost of fuel prices may be falling in the market, the tariff might not be reduced in July. It will also depend on the price of piped gas if the government decides to resume the price increase of RM1.50 per mmbtu,” explains Datin Roslina Zainal, vice-president of Tenaga’s regulatory economics and planning division.

On the balance of things, it looks like unchanged tariffs will be beneficial to  Tenaga going forward.

Nonetheless, Roslina points out that the biggest factor that will affect Tenaga’s fuel costs going forward will be the amount of imported LNG it uses. Compared to piped gas that costs RM15.20 per mmbtu, imported LNG, which has to be shipped in and re-gasified, cost Tenaga about RM46.041 per mmbtu in the fourth quarter (October to December of 2014).

Interestingly, Tenaga has little say in the cost of LNG, since it is a price taker and the price is set by Petronas, which procures the LNG. According to the ministry, the price of LNG supplied is still high since it is “linked to the ex-Bintulu LNG price and the Japan Customs-Cleared Crude (JCCC) price with a time lag of 2-4 months and 5-7 months, respectively”.

“The price of LNG remains above the reference price in the base tariff (RM41.68 per mmbtu). If the amount used is more than expected, it may offset any savings from the falling coal price,” explains Roslina.

That said, there is some expectation that LNG prices will start to taper off towards the second half of the year, which could translate into potential savings for  Tenaga.

Come July, if tariffs are not revised based on the imbalance cost pass-through (ICPT) mechanism, the country would have gone almost two years at the same tariff. The last hike was in January 2014 and the next will only be in January 2016.

This runs contrary to the government’s long-term goal of allowing fuel costs to be passed through to consumers.

In fact, there were supposed to have been two tariff hikes in the past year based on the ICPT calculations — one in July 2014 and another in January this year. This is another reason there isn’t much room for a downward revision in tariffs, since they weren’t raised when costs were higher in the first place.

Nonetheless, Roslina points out that the ICPT has been fully implemented on Tenaga’s part.

“Tenaga calculates the ICPT difference and submits it to the government. If it is higher than the base tariff, the government then decides if it wants to raise the tariff or offset the difference by other means, like delaying gas price increases or utilising PPA (power purchase agreement) savings to offset the increase in fuel costs,” explains Roslina.

Simply put, the government is still intervening heavily in electricity tariffs instead of allowing the cost to be passed through to the consumers. This is both a populist decision and one aimed at supporting a slowing economy that is facing rising inflation.

Nonetheless, analysts and industry players see it as a positive move if tariffs are allowed to more closely track global energy prices. Keeping the tariff fixed would boost Tenaga’s earnings in the short term as fuel costs are coming down. But showing political will to allow tariffs to move in tandem with the fuel cost trend is even more critical as this will mean that Tenaga will not have to shoulder the fuel cost burden as it did in the past.

Nonetheless, investing sentiment on Tenaga is getting more bullish simply because there isn’t much concern about rising fuel costs on the horizon.

“At 14 times earnings, Tenaga is still attractive for a company that has regulated assets. It is difficult to fund regulated assets at this valuation elsewhere. As long as the implementation of incentive-based regulation is maintained, Tenaga will continue to perform,” says one fund manager. 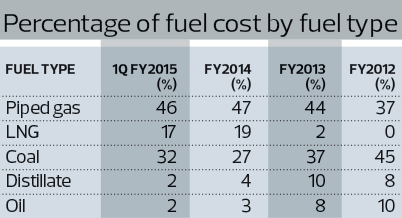