Trade Wise: Time to switch from yield to growth as QE3 ends?

THERE are “a number of very attractive high-yield stocks” that offer 5% to 7% returns in Malaysia, Mark Mobius, emerging markets guru at Franklin Templeton Investments, said at a recent media luncheon in Kuala Lumpur.

The expert stock picker also said investors should look at stocks in Malaysia individually to determine what the growth rates are going to be and work out how much more these stocks should be worth. “At this stage, there are a number of stocks that you can buy, but I wouldn’t rush in,” he was reported to have said on Oct 20.

Yet rather than recommending the safety in yields, Mobius could really be looking for entry points to quality growth stocks. In his Oct 28 blog post headlined “Focus on long-term fundamentals, not fears”, he says now seems like a good time to examine the role of investor psychology in the market.

“I can’t say when this current bout of market volatility will end, but I can say, based on decades of experience navigating the markets, it won’t last forever. And it will likely bring potential opportunities for savvy investors who know where to look.”

Incidentally, Mobius’ blog post came just a day ahead of the US Federal Reserve’s Oct 29 announcement of the end of its half-a-decade-long bond purchase programme — the latest of which is better known as the third instalment of quantitative easing (QE3) — meant to jumpstart economic growth. The next day, the US economy surprised the market by reporting its strongest back-to-back growth in over a decade. After growing 4.5% in 2Q2014, the US economy grew 3.5% in 3Q, beating median forecasts of 3%, according to Bloomberg data.

Even before that, investors wanting to look past China’s bout of poor data releases in August found comfort in the government’s effort to support its 7.5% GDP growth target for 2014, including pumping US$81.4 billion (RMB500 billion) cash into the country’s five state-owned banks in September.

So, is it time to switch from yield to growth, or at least consider doing so?

“We are growing wary of yield’s relative performance prospects in the coming quarters … Historically, dividend yield stocks tend to underperform the broad market when treasury yields are rising. And the accepted view is that QE tended to suppress yields by substantially augmenting the bid for bonds. So less or no QE should, other factors being equal, free up yields to rise as the Fed’s bid dries up,” Kurtz tells The Edge.

“The time to own dividend yield stocks is when bond yields are falling or likely to remain at the bottom indefinitely, not when yields are moving higher,” he adds, pointing out that rate strategists at Nomura expect treasury yields to rise “roughly 60 basis points” from current levels by end-2015 as growth, wage inflation and higher short-term rates all get priced into the yield curve.

“We believe the point is near where demand growth in the US will begin registering more evident US wage inflation, which will have to get priced into long-end treasury yields.”

Lim Chee Sing, executive chairman of RHB Research Institute in Kuala Lumpur, concurs. If nothing else, the end of QE3 means that investors will have to prepare for the next policy move by the Fed “and this is none other than the normalising of interest rates from an extremely low level”, he says.

In short, interest rates will rise, but when? For now, most economists expect the Fed to hike rates by 3Q or 4Q2015, if not earlier.

“In a rising interest rate environment, high dividend-paying stocks that are trading at rich valuations may continue to lose their appeal as the spread between the dividend yield and interest rates [fixed-deposit or risk-free rate] will be narrowing,” Lim explains.

That’s why “growth over yield” is what is being recommended over a 12-month time frame by Mixo Das, Nomura’s Asia ex-Japan equity strategist in Hong Kong, “for lower beta and lower correlation to carry trade returns”.

“The most important deciding factor there is the direction of bond yields (and thus nominal growth expectations and Fed policy expectations). Earlier this month, the financial markets were pricing in sharp headwinds to growth, which we thought were overdone.

“Economic data, on the whole, has been mixed, but this only means that the outlook for 2015 [which already expects accelerating global growth from 3.2% in 2014 to 3.6% in 2015] should remain unchanged,” Das tells The Edge, pointing out that consensus expectations of the Fed’s first rate hike happening had moved backwards to August from October 2015 after last Wednesday’s Federal Open Market Committee announcement.

To be sure, Das expects 2015 to see “occasional periods of risk aversion, but the overall direction of bond yields should be higher”.

For Malaysia specifically, Das had, in a recent note, said risks to earnings outlook remain beyond the near term but there are stock-specific re-rating opportunities. “Capturing earnings growth at a reasonable price will be

Das adds, “The other thing to remember is that yield as a style is a very crowded and expensive trade compared with its own past as well as relative to growth.”

Put another way, the switch from yield to growth plays could also be spurred by the fact that yield stocks have already been chased high. “More than 40% premium is currently being paid in global equity markets for the higher-yield quartile of stocks,” Kurtz says.

Deep-pocketed pension funds, including the Employees Provident Fund (EPF), favour companies with strong cash flow and dividend-paying capability to add to their pool of realised investment gains to pay annual dividends to members.

For now, however, Bloomberg data lists the EPF as the “top seller” of three of Malaysia’s four major telecoms stocks: DiGi.Com Bhd, Telekom Malaysia Bhd and Maxis Bhd. Telecoms stocks are known for their dividends and are favourites during periods of slow growth.

Based on the lowest analyst dividend forecasts on Bloomberg of 23 sen and 21 sen respectively for Maxis and Telekom, there is a downside of 2.5% for Maxis and 16.7% for Telekom from their respective Oct 30 close of RM6.74 and RM7.20 if one used 3.5% yield as a minimum expectation. For DiGi, the upside potential is 13.9% to RM6.86, using the lowest dividend forecast of 24 sen and assuming 3.5% yield.

The DPS forecast for Telekom ranges from 21 sen to 31 sen and averages at 27.3 sen, which values the stock at RM6.83 if one assumed 4% yield. The minimum is above 19.1 sen based on its RM700 million minimum annual dividend promise.

Perhaps spurred by expectations of a business trust structure happening, the forecast for DiGi’s dividend is higher at 24 sen to 29 sen and averages at 26.2 sen, which values the stock at RM8.80 if one assumed 4% yield.

Among banking stocks — which Mobius also recently reported to like, alongside generous dividend payers such as British American Tobacco (M) Bhd, Guinness Anchor Bhd and Carlsberg Brewery (M) Bhd — the EPF pared about 22 million shares or 1.21% of Hong Leong Bank Bhd in the past four months. It still held 13.15% as at Oct 27, down from 14.36% as at June 19. It is worth noting that the EPF said due to its size, it usually chooses to take profit when there is enough buying interest in the market.

To be sure, the higher borrowing costs that come with the end of ultra-low interest rates in the easy-money QE era, which drove asset prices higher and fuelled credit growth, are supposed to mean that the US economy is in better shape.

As RHB’s Lim says, the end of QE3 “implies that the Fed is increasingly more confident of the US economic recovery and there isn’t a need for investors to hide behind defensive and high-dividend stocks”.

Still, he reminds investors that the inability of the major world economies to transition from a recovery to an economic boom since the 2008/09 global financial crisis suggests that lack of growth, specifically earnings growth on the part of corporates, is the key problem. “This means that to outperform the market, one would need to identify growth stocks to make a difference. At the end of the day, it is earnings growth that will create new shareholder value and bring down valuations to a more attractive level,” he remarks.

In any case, current consensus shows there may well be some six to nine months before interest rates begin to rise. For investors who still want to have yield stocks in their portfolio, see Page 10 for a selection of those with positive quarter earnings growth, single-digit PE multiples and at least 4% yield, according to Bloomberg data. Yields for 10-year MGS are between 3.82% and 4.12% at the time of writing. 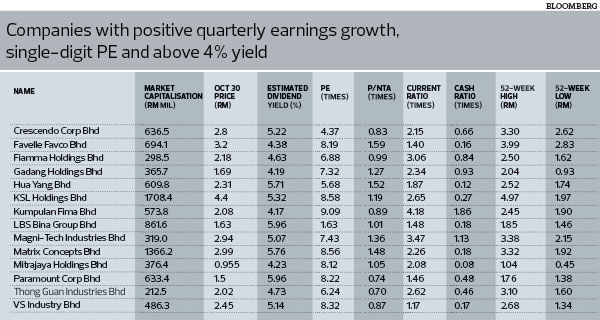