NOWADAYS, people, at least the urban folks, just can’t live without smartphones and tablets. This paints a positive picture for semiconductor stocks such as Unisem Bhd and Globetronics Bhd.

Furthermore, the recent fall in crude oil prices augurs well for the semiconductor industry. Cheaper fuel prices means people will have more disposable income and could purchase electronic devices with the extra cash.

Hence, fund managers and investment analysts say the current share price weakness of semiconductor stocks leaves much room for upside potential, if analysts’ projections are anything to go by.

However, for the time being, there might not be any sudden increases in orders as the smartphone component makers already have their hands full in meeting current orders.

Globetronics Technology Bhd CEO Heng Huck Lee says its forecast for semiconductor sales for the three months ending January 2015 comes as “no surprise”. Reiterating that the company is poised to break its net profit record again for the financial year ending Dec 31, 2014 (FY2014), he adds that the projection has not taken into account any inverse correlation between oil prices and semiconductor sales.

“Declining oil prices will have an indirect effect on the smartphone makers. As people have more disposable income, their tendency to buy smartphones may increase correspondingly,” Heng tells The Edge in a telephone interview. 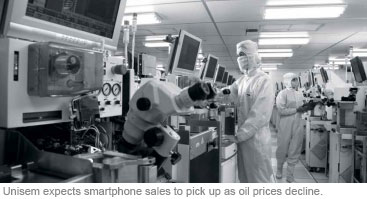 Unisem (M) Bhd chairman and managing director John Chia tells The Edge that he expects smartphone sales to pick up as oil prices decline. However, he admits that the company has not seen any sudden increase in orders after the black gold’s biggest drop in value in four years.

“We have already received orders for the next quarter. For now, we have not factored in the fall in oil prices, we are busy with fulfilling our clients’ orders,” says Chia.

Areca Capital Sdn Bhd CEO Danny Wong notes that semiconductor players that are involved in advanced technology — especially those that have the drive for innovation and come up with new products — will benefit in the long run as demand for smartphones will always be there. These companies will have enough orders to keep them busy, he adds.

“Besides the high growth area, we also see the defensive segment, namely automotive, to fuel the earnings growth of both Malaysian Pacific Industries Bhd (MPI) and Unisem going forward. This will be driven by continued strong orders for tyre pressure monitoring systems (TPMS), as the European Union has made it mandatory for all new passenger cars to incorporate the system from Nov 1,” he says.

According to Chong, MPI has a 22% exposure to the automotive segment while Unisem has roughly 18%.

Semiconductor players manufacturing smartphone components fell victim to the selldown in global markets in the week ended Oct 17, during which the benchmark FBM KLCI dropped to its lowest level in over a year of 1,767.77 points on Oct 16.

There were concerns that the global growth in semiconductor demand might not be strong as expected. However, the iPhone’s latest sales results, which have exceeded expectations, is reassuring.

While there was a rebound in the stocks’ share price last week, analysts’ target prices seem to show there could be more upside, Bloomberg data show. Unisem, for instance, has an average target price of RM1.90, which is 19.5% higher than last Friday’s closing of RM1.59.

Of the nine analysts covering Unisem, six have a “buy” call on the stock, while the rest have a “hold”. Their target prices range from RM1.51 to RM2.30.

However, Globetronics does not seem to have the same double-digit upside potential, after having nearly tripled its market value in the past year. The analysts’ average target price of RM4.53 indicates a 0.67% upside to last Friday’s close of RM4.50. The target prices compiled by Bloomberg ranged from RM4.53 to RM5.

However, MIDF Research, which has a target price of RM5.45 for Globetronics, was not included in the Bloomberg data. The research house commended Globetronics’ addition of wearable devices, which include products for the “recession-proof” healthcare sector, into its portfolio as timely, given the slowing demand for smartphones in the mature markets.

MPI has the highest implied upside — in absolute and relative terms — as the average target price of RM6.52 denotes that the stock could go up as much as RM1.77, or 30.9%, from last Friday’s close of RM4.98. Seven analysts advise investors to “buy” the stock, while two have a “hold” call, with the target prices set between RM4 and RM7.50.

However, Areca’s Wong does not think oil prices will remain depressed for the long term. Thus, semiconductor sales might not be affected much.

An analyst says the smartphone component makers’ upcoming quarterly earnings reports in November will be closely watched, in the hopes of a surprise in earnings growth, one that is similar to Apple Inc’s latest quarterly results that exceeded analysts’ highest expectations, thanks to just nine days’ worth of iPhone 6 sales.