IN recent weeks, furniture makers have stood out as the few counters bucking the downward trend in the stock market. Investors see them as benefiting from the appreciation of the US dollar against the ringgit.

Furniture makers have a large export market and deal in US dollars. Thanks to the dollar’s appreciation, they will see an expansion in their revenue after converting it to ringgit.

Latitude Tree Holdings Bhd managing director Joseph Lin told The Edge in a previous interview that a 1% increase in the US dollar translates into an additional RM150,000 in its turnover and RM15,000 in its profit before tax.

Nevertheless, furniture makers agree that the gain from the currency appreciation may only be temporary. Where export volume is concerned, it remains to be seen if demand will increase significantly going forward as a result of the stronger US dollar and weaker ringgit.

“We expect additional currency gains of some 10% and hence [an increase in the] bottom line in the short term due to higher ringgit sales proceeds or realised forex gains. However, the forex gains may not be sustainable as customers will ask for discounts to adjust for the permanent changes in forex,” a spokesman from Poh Huat Resources Holdings Bhd says when contacted.

With the US economy’s growth appearing to be gaining momentum, furniture makers with large exposure to the US market could be in a sweet spot. It was reported that new home sales in the US for November declined 1.6% to a seasonally adjusted annual rate of 438,000 units the month before, but it was still 7.7% higher compared with the first 11 months of 2013, indicating a recovery trend.

New home sales account for 8% of the housing market and can be volatile from month to month. Economists say the US housing market has been dragged down by slow household formation due to slow wage growth.

Nevertheless, an acceleration in new home sales is expected this year as the labour market strengthens, leading to a quicker pace of wage growth.

The spokesman from Poh Huat (fundamental: 2.1; valuation: 2.4), which sees a 65% contribution to sales from the US market, says it saw an increase of 1% to 2% in terms of US dollar sales in the last three months of last year compared with the year before. The company expects to see an increase in demand in the coming months due to the improved consumer confidence and sourcing channels in the US.

It expects sales in US dollar to improve by 5% to 10%, in line with the projected growth in the US furniture market.

“More than 70% of the respondents to a factory survey done by Furniture Today in the US reported that orders for the year (2014) to date were up from a year earlier. There is a consensus among industry participants that demand for furniture in the US market will be sustained,” says Poh Huat’s spokesman.

Meanwhile, Homeritz Corp Bhd executive director Tee Hwee Ing says the company has not seen a decline in demand from its main markets of Europe and Australia. Homeritz (fundamental: 1.95; valuation: 2.1) specialises in upholstered furniture, catering for the higher end of the market.

Tee is aware that the lacklustre economic conditions globally, especially in the European market, could cause consumers to tighten their purse strings. Thus, the company expects Australia to contribute more to its sales in the coming year.

Nevertheless, it is confident that its long-standing relationship with its customers and its new designs will give it an edge in the markets it operates in.

Interestingly, HeveaBoard Bhd (fundamental: 1.3; valuation: 2.4) managing director Yoong Hau Choon says it saw an increase in sales of 30% during the last three months of 2014 for its ready-to-assemble furniture, which are exported to its main markets of Japan, Australia and France.

Japan is still mired in deflation and fell into recession in the third quarter of last year while the French economy is seeing gross domestic product growth of close to zero.

“The furniture market as a whole is very challenging. We are stepping up our efforts in automation to improve production efficiency and offering a wider range of special products to the market. I believe with the continuation of these efforts, we will be able to further enlarge our market presence,” says Yoong.

Meanwhile, the FBM KLCI only gained 2.72% over the same period.

Following the rise in share prices, the price-earnings ratios of furniture makers have run up from the low single digits to high single digits, and even to the low teens.

“The valuations are no longer cheap for the furniture makers. It’s a highly competitive and cyclical industry where earnings tend to be volatile. However, there are some that are still able to provide good dividends,” says a market observer.

While furniture makers are not known for their dividend payments, Homeritz appears to be the most generous, paying out 50% of its profits for the financial year ended Aug 31, 2014.

Meanwhile, as investors continue on the US dollar theme, it is fair to say that should the greenback appreciate further, there could be more upside to the furniture makers’ share price performance. However, it remains to be seen if sales in terms of volume would see robust growth as well. 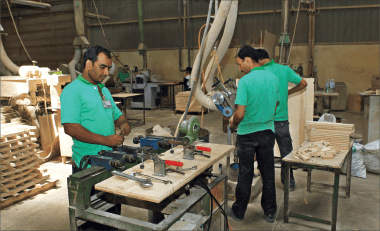