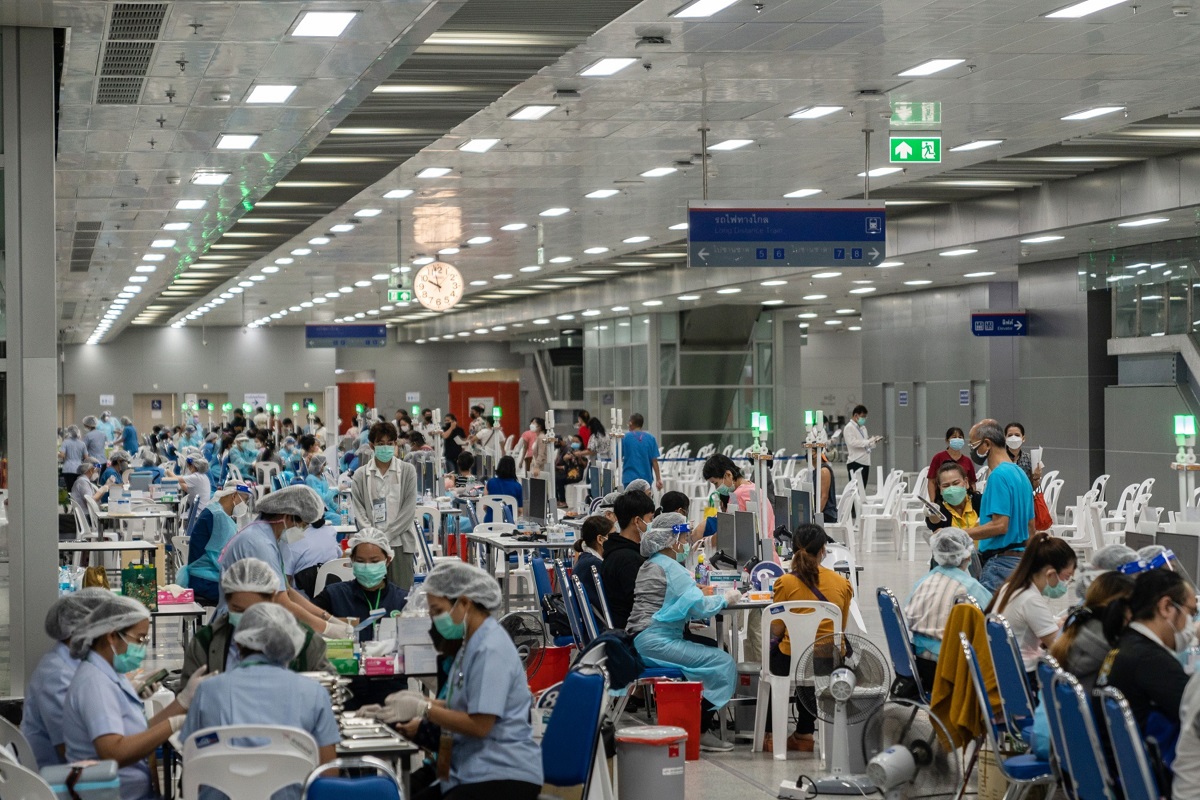 Healthcare workers administer doses of the AstraZeneca Covid-19 vaccine at a vaccination center set up at the Bang Sue Grand Station in Bangkok, Thailand, on Friday, July 16, 2021. Thailand reported a record one day tally of new covid cases as lockdown-like restrictions imposed in the nation's virus hotspots failed to stem a raging outbreak. (Photo by Bloomberg)

(July 30): The pandemic’s impact on global trade risks worsening in coming weeks as more factories across Southeast Asia brace for closures amid one of the world’s deadliest outbreaks.

Factory shutdowns are accelerating in Vietnam, while Thailand is prepping for outbreaks among its manufacturers and the Philippines tightens restrictions in its economic heartland.

While Southeast Asia weathered the spread of the coronavirus last year relatively well, the delta variant has spread swiftly across a sprawling region that has been slow to vaccinate a population twice that of the US. The region’s death toll now has nearly overtaken Latin America as the world’s worst.

The economic impact will be acute for nations like Vietnam and Thailand, where exports were expected to be a bright spot as richer economies in the west emerged from lockdowns. The disruptions come as shipments and orders would traditionally ramp up to meet demand for the Christmas shopping season.

The new closings in Vietnam follow recent decisions by local manufacturers for Nike Inc. and Adidas AG to suspend operations over virus restrictions. The country has been the second-largest supplier of apparel and footwear to the US for many years, according to the American Apparel & Footwear Association, which represents more than 1,000 brands, including Gap Inc, J Crew Group Inc and Levi Strauss and Co.

Meanwhile, Thailand’s 60,000 factories are preparing for the worst, with the national industry group helping set up contingency plans to isolate all workers as manufacturing emerges as a potential new hotspot for infections. Toyota Motor Corp earlier this week extended indefinitely its shutdown of three plants in Thailand because of Covid-related parts shortages.

Industry groups in both countries have called on their governments to help procure vaccines they intend to distribute privately, seeking to accelerate inoculation programs that are behind schedule. Only about 10% of factory workers are vaccinated in Thailand, according to the Federation of Thai Industries.

“The sector is lost. There’s nowhere we can turn to for vaccines,” said Supant Mongkolsuthree, the Thai group’s chairman. “Vaccines are the best solution, the best way to protect the people and the manufacturing sector. This will help prevent factories from becoming a source of infections.”

The food, electronics, garment, steel and plastic sectors are the most affected so far in Thailand, according to the country’s Center for Covid-19 Situation Administration, which said 49 of 77 provinces had reported outbreaks in factories. New clusters emerged Friday in care tire and air-conditioner factories, it said.

Meanwhile, many factories in southern Vietnam that did set up on-site sleeping arrangements are facing outbreaks among workers, the report said, citing information from the companies.