TPP deal online in next 24 hours for public scrutiny 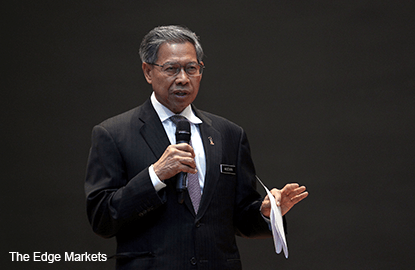 (Nov 5): The Trans Pacific Partnership (TPP) agreement will be made public, as early as within the next 24 hours for the public to scrutinise, Putrajaya said today.

Minister of International Trade and Industry Datuk Seri Mustapa Mohamed the text of the agreement, which spanned several hundred pages and include annexes, appendixes and schedule, will be uploaded on his ministry's website.

"The text of the agreement may be publicised within 24 hours, I will make a statement maybe this evening," he said when winding up debates on the Budget 2016 in Parliament today.

Detractors of the controversial 12-nation deal have claimed it will cause negative economic growth and have implications on the country's sovereignty.

He said the text will also be given to two parties, namely international auditing form PricewaterhouseCoopers and research organisation Institute Of Strategic & International Studies (Isis).

Both firms will do a cost benefit analysis, the results of which will be out in two to three weeks time and will be made public, he added.

Mustapa said the TPP agreement will also be tabled and debated in Parliament, at a special sitting early next year.

"There is no formal discussions with the speaker yet but according to the government's initial plan, it may be in January or early February, but it all depends on the speaker's approval.

"With that, not only the MPs, but Malaysians will know the contents of the agreement," he said.

He acknowledged that the ministry had received a lot of objections to the trade deal, and some had even sought meetings with the government to voice their concerns.

Reiterating the ministry's commitment to engage stakeholders, Mustapa also denied that the trade deal was a form of colonisation, and pointed out that Malaysia would lose out in an increasingly globalised world if the country rejected it.

"If Malaysia is not part of the TPP, our country will be less competitive," he said.

Malaysia was one of the 11 nations which finalised the trade pact with the United States, aimed at liberalising commerce across nations accounting for 40% of the global economy. It has yet to be ratified by each country.

Despite Putrajaya’s assurances that the deal would take into consideration almost all of Malaysia’s concerns and sensitivities, such as government procurement, state-owned enterprises and bumiputera issues, anti-TPP lobbyists still hold that the deal will remove the country’s control over policymaking.

They also fear that the deal will put the government at risk of being sued if public interest is prioritised over foreign investors.

Former prime minister Tun Dr Mahathir Mohamad has described it as a "very bad" agreement, and has expressed worries that the deal would affect the competitiveness of Malaysian companies.

Former World Bank chief economist Joseph Stiglitz and Roosevelt Institute senior economist Adam Hersh have said the TPP would make Malaysia "worse off" and predicted that industries like iron and steel, aluminium, mineral fuels, plastics, and rubber are among the sectors that will be hurt.

Economists at the United Nations Conference on Trade and Development, UNCTAD, had forecasted that Malaysia would actually be a net trade loser as a result of joining TPP, with the trade balance — difference between the value Malaysia produces for export and the value it imports — declining by US$17 billion (RM75 billion) per year as a result of the agreement. – The Malaysian Insider