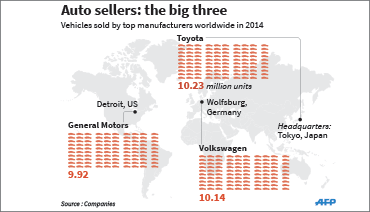 TOIYO: Toyota sold 10.23 million vehicles last year, it said yesterday, outpacing General Motors (GM) and Volkswagen to remain the world’s biggest automaker, but a shaky outlook for 2015 could see it lose the title to its German rival.

But Toyota also said sales would decline this year to an expected 10.15 million vehicles, as demand falls off in its home market.

That will likely mean Toyota will trail behind Volkswagen this year, as the latter rides momentum in emerging economies that could see it take the lead in global auto sales for the first time.

Toyota broke GM’s decades-long reign as the world’s top automaker in 2008, but lost the crown three years later as Japan’s earthquake-tsunami disaster hammered production and disrupted the supply chains of the country’s automakers.

However, in 2012 it once again overtook its Detroit rival, which sells the Chevrolet and luxury Cadillac brands.

Toyota saw strong results in North America but warned about a downturn in some key Asian markets including Indonesia and Thailand, which has been hammered by political unrest.

There are also growing fears about the entire industry’s prospects in China owing to concerns about the health of the world’s No 2 economy.

Toyota’s upbeat announcement comes despite the firm struggling to recover its reputation for safety after the recall of millions of cars around the world for various problems, including an exploding air bag crisis at supplier Takata.

A Toyota executive has said that the giant automaker is emphasising quality of sales rather than volume. For example, Toyota is pushing further into the fast-growing market for environmentally-friendly cars, especially in China where officials are struggling to contain an air pollution crisis.