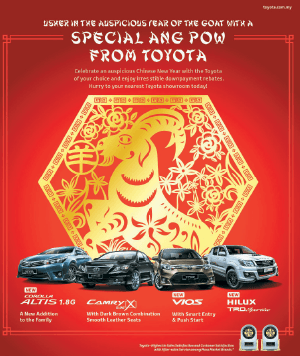 WHEN UMW Toyota Motor recently kick-started its Chinese New Year sales campaign, it urged customers to visit its showrooms nationwide to view the Toyota models and deals on offer.

This year, Toyota has made several improvements to its model line-up. All variants of Toyota Vios including the Vios E and Vios J now have the push-start button with the Smart Entry and Start System. The newly-improved Toyota Hilux is also available in TRD Sportivo variant for the 2.5G and 3.0G automatic models.

Customers stand to enjoy an “ang pow” from Toyota, which is offering attractive deals for the Vios, Camry, Hilux or Altis models. Offers are valid while stocks last.

For more enquiries, call 1-800-8-869682. More information can be obtained at Toyota  showrooms nationwide or at www.toyota.com.my.

To mark its 15th year, TEY 2015 participants across 16 schools were presented with a waste management theme, a new challenge which serves to raise the eco contest to new levels.

The theme was chosen because of the massive problems caused by waste, said UMW Toyota president Datuk Ismet Suki, adding that he hoped having a thematic focus would drive innovative ideas and concepts with potential for community and national use. Apart from the key elements of reduce, reuse and recycle, more can be done to optimise the management of various categories of waste.

The TEY programme, established in 2001, was initially a school-based eco contest where participating students identified and resolved environmental problems within the school compound. In 2011, the TEY programme was extended to the local community so as to widen its reach. For more information on TEY, visit www.toyotaecoyouth.com.my.

This article first appeared in The Edge Financial Daily, on February 12, 2015.