A townhouse for two 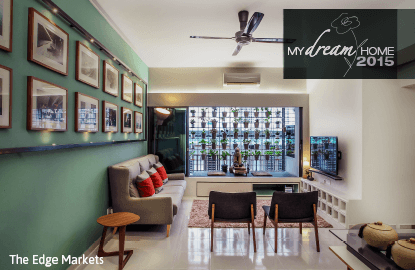 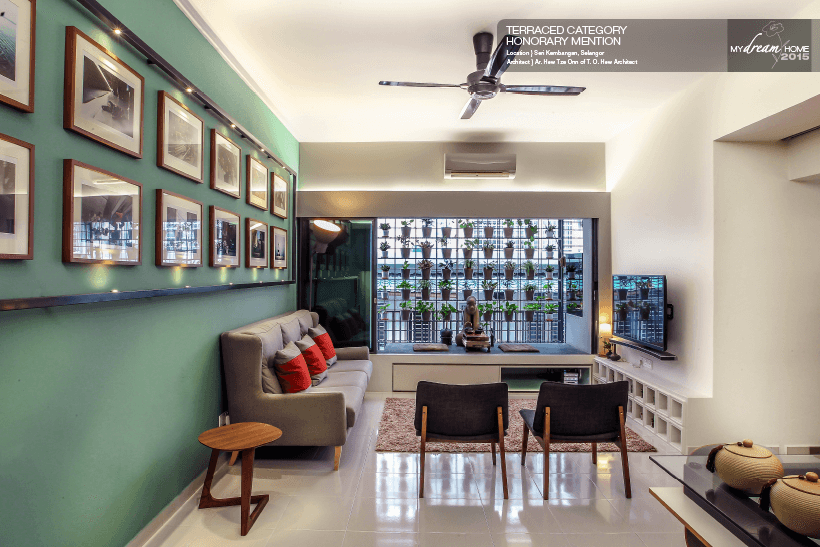 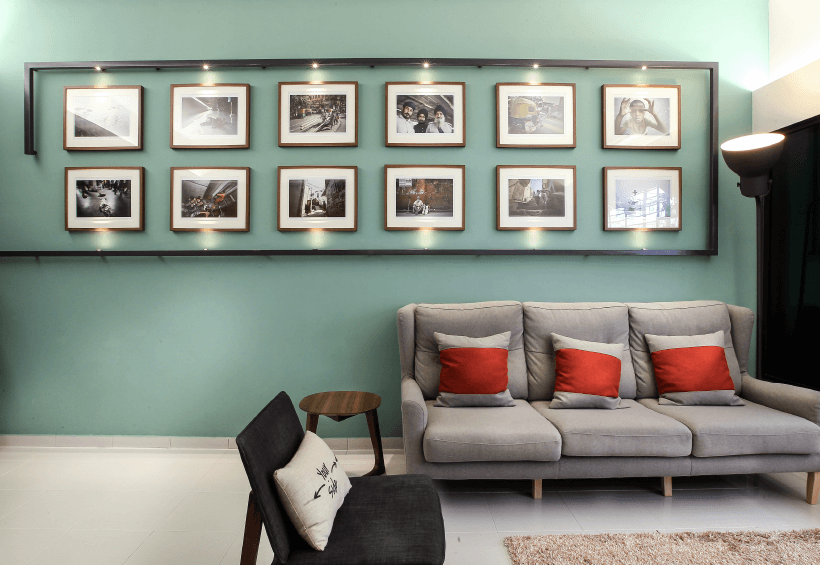 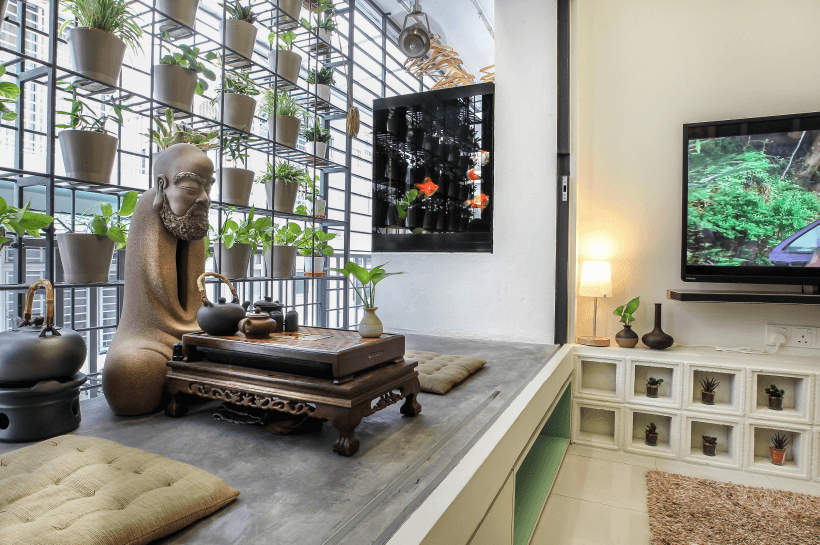 “I did a site visit and realised several features could be improved on,” Hew recollects. “The living room of the house behind directly overlooked this living room, offering little privacy. And the attached balcony — that again faces that of their neighbours across — would have been wasted. Most neighbours were using theirs entirely as a drying yard instead of a social space.” Max’s brief was also to work in a study somewhere around the house as well as a conducive entertainment space within the limited confines. 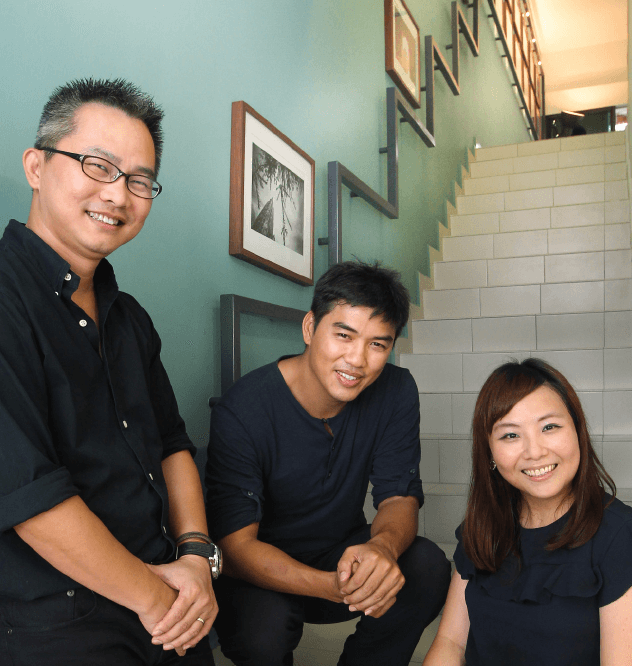 Hew first tackled the living room, just up the stairs upon entering the front door. Max is an enthusiastic photographer and the architect customised a zig-zag steel staircase railing that doubles as an underline for framed photos to be displayed, climbing all the way up to the living room where it forms a border around a dozen photographs featuring scenes of India. “I took these on a photography study trip to India a couple of years ago,” shares Max of the people and places portrayed. A couple of the photos are especially haunting, images of harsh poverty juxtaposed with serene landscapes and jovial portraits that act as definite conversation starters.

As no structural changes were to be made, Hew converted the balcony into a daybed with a cement-rendered top and discreet storage space beneath. To address the issue of privacy, a green screen was erected, comprising rows of potted plants. For complete privacy, a set of blinds can be pulled down behind them. Screen doors can also close off the daybed and seal the space should the couple want to switch on the air conditioning.

Max also wanted an aquarium, and Hew configured its setup rather ingeniously. It was built into the wall separating the daybed and the drying yard outside the kitchen so that its filters and wiring are visible only from the back, leaving the front clean and seamless. It is almost surreal to sit on the daybed, backed by thriving plants and watched over by curious fish in this thoroughly modern living room. The wall-mounted television is parallel to the aquarium. Beneath it is a building vent painted white and its cubby holes filled with tiny potted plants. 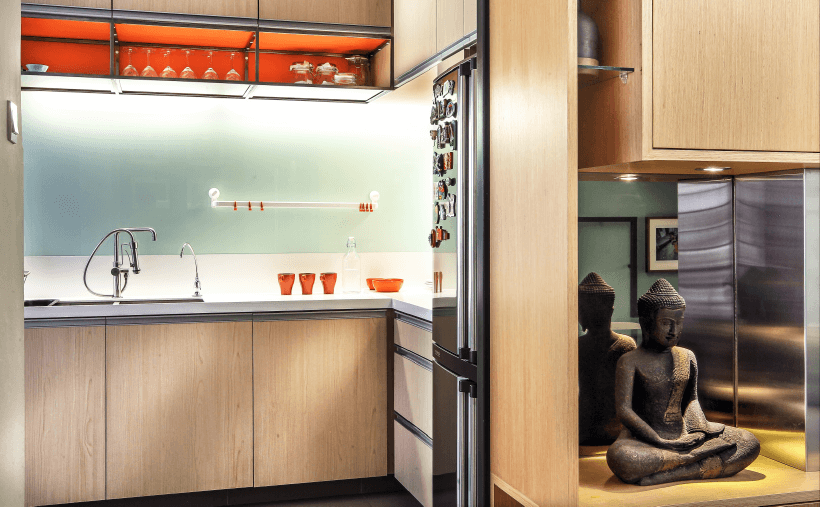 Immediately to the right of the stairs is the dining area, another exercise in space maximisation. Hew forwent the traditional table in favour of a cantilevered platform emerging from a built-in showcase, the absence of table legs easing chair arrangements to accommodate a higher number of diners. On the projecting dining table — Hew offers repeated assurances of its safety — is a glass-topped wooden compartment box to be filled with trinkets picked up on the Lees’ travels. Small statues of deities and beautiful calligraphy brushes occupy the table-height alcove of the showcase, while most of its space functions as storage cabinets.

The kitchen lies behind the hall and dining area, a long and narrow space fully utilised by clever storage and appliance arrangements. This is where Shamaine can be found most weekends, experimenting with breads and desserts. A sliding door closes off the sounds and aromas from the kitchen if necessary.

Up a further flight of stairs, where the bedrooms lie, two long scrolls with flawless Chinese calligraphy hang on the wall of the landing, meticulously done by Max. And it is here, too, that another creative gem by Hew has been installed. The high ceiling of the top floor, especially above the stairs, provided sufficient height to introduce a mezzanine floor that functions as Max’s study. Inadequate space for a conventional flight of stairs saw Hew instead recommend alternate tread or samba stairs — it’s a sharply vertical ascent but the design breaks up the climb. To ensure the load is evenly dispersed, the right side of the mezzanine floor is supported by a mounted steel frame while the staircase holds up the left. Fashioned from steel and timber by Max himself, who works in steel fabrication, the study is small but efficient. A beige rug and oversized red beanbag save it from looking too sterile, with its built-in desk and mounted shelves. Max loves his corner and whiles hours away here, working on his computer or browsing through books.

“We had to work within a tight budget so we had to be wise in choosing spaces carefully and doing work that was impactful,” says Hew. “This was especially fun because they trusted me completely with the project.”

It was upon Max’s request that greenery be incorporated into the interior design, with potted plants to be found throughout the house. Shamaine is grateful that her husband is diligent about watering them as well as taking care of the aquarium. “He really likes things clean and always complains when I start baking because of the mess that comes with it,” she laughs mischievously.

On the wall beneath the mezzanine floor, a large space has been outlined in black steel, waiting for a masterpiece of a photograph to inject some colour. The couple are musing on the perfect photo to take this pride of place, and Max shakes his head in the negative when asked if one of his own will grace the space. “It will probably be our wedding photo,” he smiles. “That deserves to be there.” 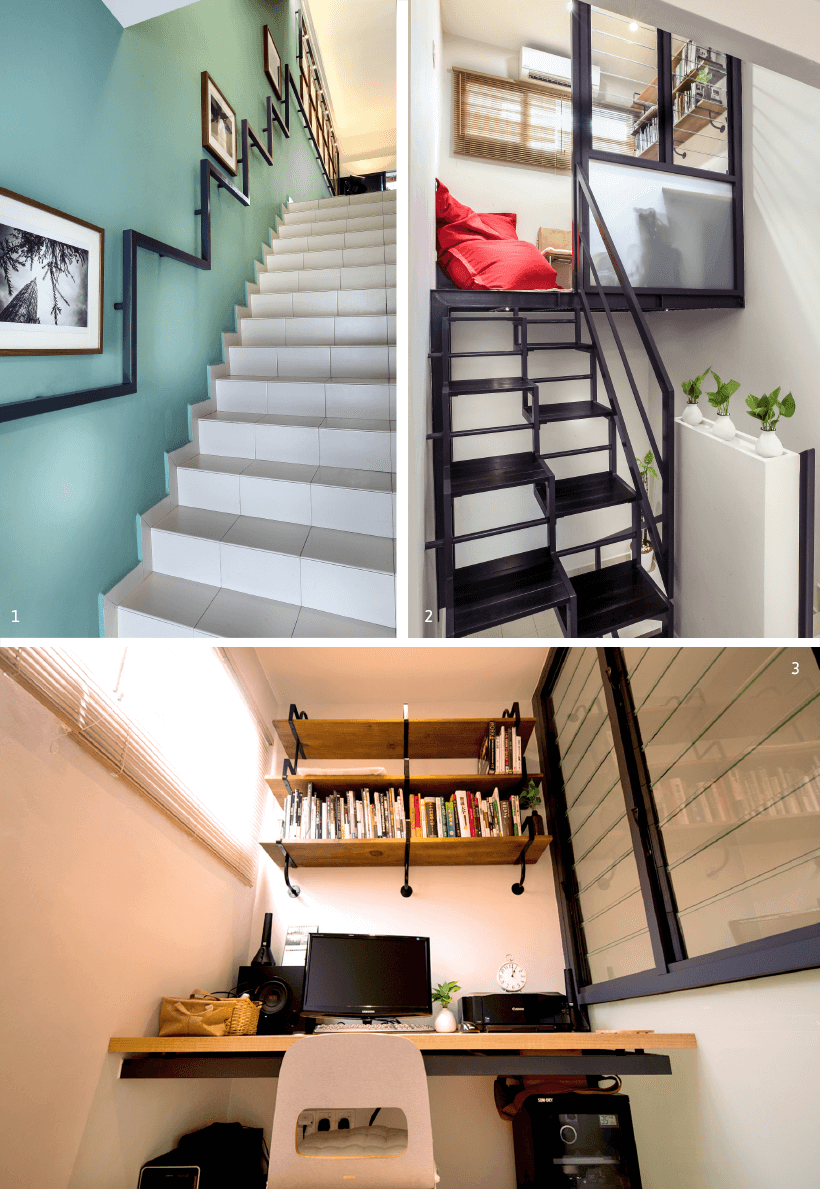