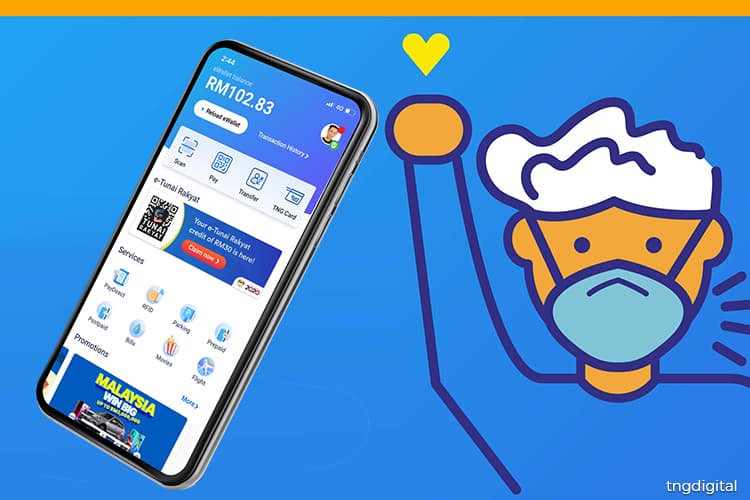 Proceeds are channelled directly to NGOs, such as Kechara Soup Kitchen, Tzu Chi Buddhist Foundation and Yayasan Generasi Gemilang, enabling them to better serve the needs of the homeless, vulnerable and low-income families in a shorter time frame sans the administrative paperwork.

TNG Digital Sdn Bhd CEO Ignatius Ong said in a statement the current situation is a challenging time for all, especially for healthcare and public service workers.

"We want to do our part in supporting efforts through our user base of over 10 million by advocating a digital, cashless manner in which financial aid can be given, not just as an immediate response to Covid-19 but as [a] long-term solution.

“In fact, we urge NGOs who have been relying on traditional methods of receiving donations, to get in touch with us so that we can assist in providing a safe, seamless and quicker avenue through our eWallet,” he said.

“Donations via QR codes isn’t a new thing,” said Ong, adding that Touch ‘n Go eWallet launched JOM INFAK at mosques in 2018, and saw an increase in donations due to the convenience of donating anytime, anywhere.

“With the MCO in place, users can continue to donate by scanning the QR codes found on our Facebook page or save the QR code image in the phone gallery. Then, share it with family and friends through messaging apps thereby increasing the opportunity of donations to these NGOs,” he said.

Tengku Zatashah, who is involved with many NGOs, said she can regularly donate funds via Touch ‘n Go eWallet to the various charities during the MCO period as she cannot be on the ground volunteering.

Yayasan Generasi Gemilang CEO Melissa Ngiam said the facility allows the foundation to expand its channels to receive public donations that are vital to support the work of increasing access to quality education.

"During this time of the MCO, funds received also allow us to provide food and urgent aid for low-income families," Ngiam said.

Tzu Chi Foundation multimedia and communication head Chong Chuan Yit said the foundation relies fully on public donations, adding that the public donates to its Covid-19 Assistance Fund to aid the vulnerable during the MCO period.

“With offices located in all states across the country, having a Touch 'n Go eWallet QR code ensures a sustainable donation platform in the long run to continue the good work by Tzu Chi volunteers,” said Chong.

This initiative was kickstarted on the Touch ‘n Go eWallet’s social media platforms, in-app and is also now available on a dedicated web page on www.tngdigital.com.my.