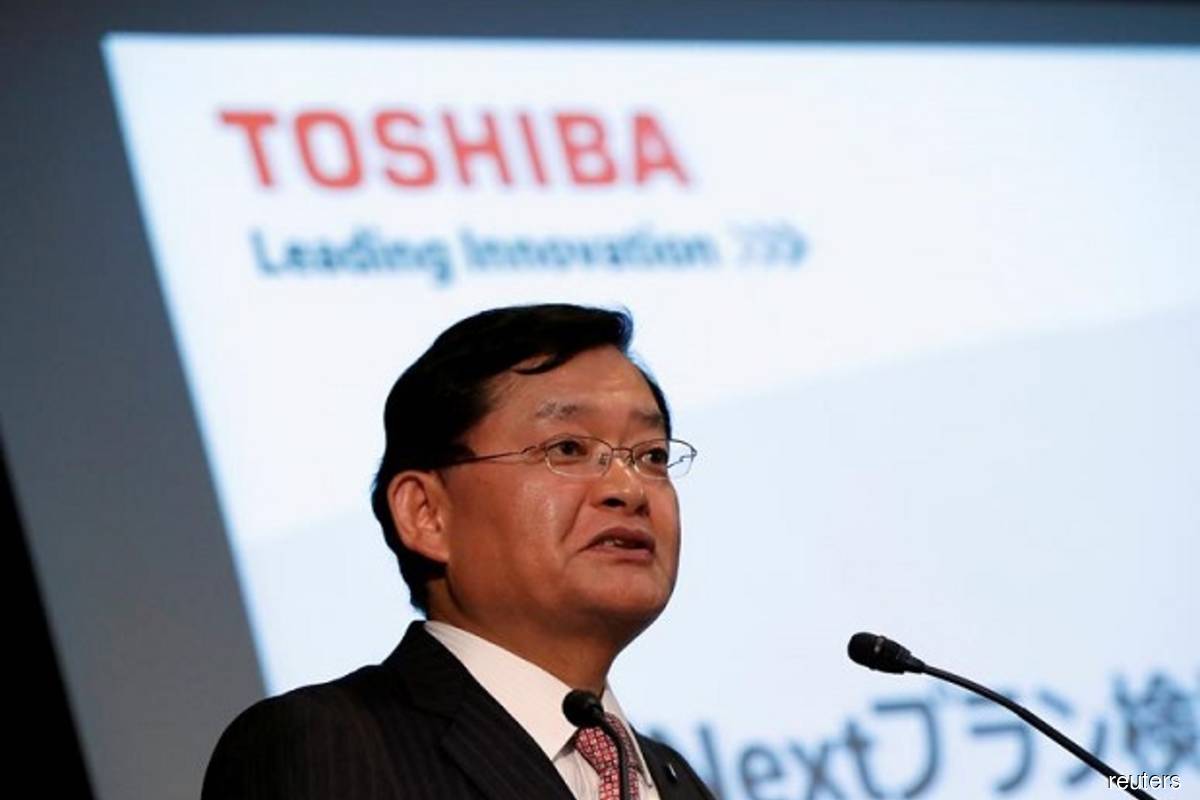 Toshiba Corp's CEO Nobuaki Kurumatani attends a news conference at the company's HQ in Tokyo, Japan on May 15, 2018 (Reuters filepix by Issei Kato)

Kurumatani had been under fire over the bid from CVC and his former employer.

Satoshi Tsunakawa, who led the company before Kurumatani and until Wednesday was chairman, will once again assume the helm.

Kurumatani had been under fire over the bid from CVC, his former employer, as well as damaging allegations that investors were pressured before a shareholder meeting to support desired board nominations.

CVC's offer to take the scandal-hit Japanese conglomerate private and retain incumbent management was perceived as designed to shield Kurumatani from activist shareholders who have successfully pushed for an independent probe into the allegations, sources familiar with the matter have said.

The offer sparked a strong backlash from Toshiba managers, prompting them to lobby against it to the government, said one of the sources. The sources declined to be identified due to the sensitivity of the matter.

"Tsunakawa has the trust of various stakeholders," Toshiba board chairman Osamu Nagayama told a news conference, adding that Kurumatani had told the board that he was stepping down as the company's recovery was now firmly in place.

People familiar with matter said, however, that two board members had told Kurumatani they planned to oust him due to his slumping support among shareholders and staff, and that the CVC offer had only accelerated the move.

Nagayama said CVC's April 6 proposal was unsolicited, lacked substance, and required cautious consideration. He noted that a law which restricts foreign ownership in Japanese companies with important technology would have to be taken into account.

Toshiba would consider setting up an independent committee of external directors after receiving a formal proposal from CVC, he added.

Tsunakawa, who has a reputation for being on better terms with Toshiba's large activist shareholder base, said the company needed to rebuild trust with investors and acknowledged there was room to improve governance.

The Toshiba shareholder vote last month for an independent probe was a watershed victory for corporate governance in Japan, marking the first time that a motion by an activist shareholder has won approval at a major company.

Both Nagayama and Tsunakawa suggested current management did not intend to stay in place for too long.

"I am aiming to complete my mission quickly and hand over to the next generation," Tsunakawa said.

Shares in Toshiba closed 6% higher at ¥4,860, which compares with the ¥5,000 per share level that a source has said was proposed by CVC.

Other suitors appear to be waiting in the wings.

Private equity giant KKR & Co is considering a buyout offer that would exceed CVC's, the Financial Times has reported, citing several people briefed on the plans.

Canada's Brookfield Asset Management Inc is in the preliminarily stages of exploring an offer, Bloomberg News reported, citing a person with knowledge of the matter.

A representative for KKR Japan declined to comment. Brookfield did not immediately respond to a request to comment.

Battered by accounting scandals, massive write-downs for its US nuclear business as well as the sale of its semiconductor unit, the once-storied conglomerate is a shadow of its former self.

That said, it remains one of Japan's few manufacturers of nuclear power reactors and makes defence equipment including lithium-ion batteries for submarines, meaning any sale of Toshiba would need government approval.

Toshiba also retains a 40% stake in Kioxia Holdings Corp, its former chip unit which is controlled by US private equity firm Bain Capital. It has promised to return to shareholders a majority of gains made from reducing its stake in a planned Kioxia initial public offering (IPO) and to gradually unwind the holding after Kioxia is listed.

Kioxia's fortunes have only risen amid a deepening global shortage of semiconductors as consumers spend much more time at home due to the coronavirus pandemic, boosting demand for premium electronic devices as well as more data centres.

Tsunakawa said there was no change in Toshiba's plans to support the Kioxia IPO.

Micron Technology Inc and Western Digital Corp are individually exploring a potential deal for Kioxia that could value the firm at around US$30 billion, the Wall Street Journal reported last month.

At the time, Micron declined to comment, while Western Digital and Kioxia did not respond to Reuters' requests for comment.