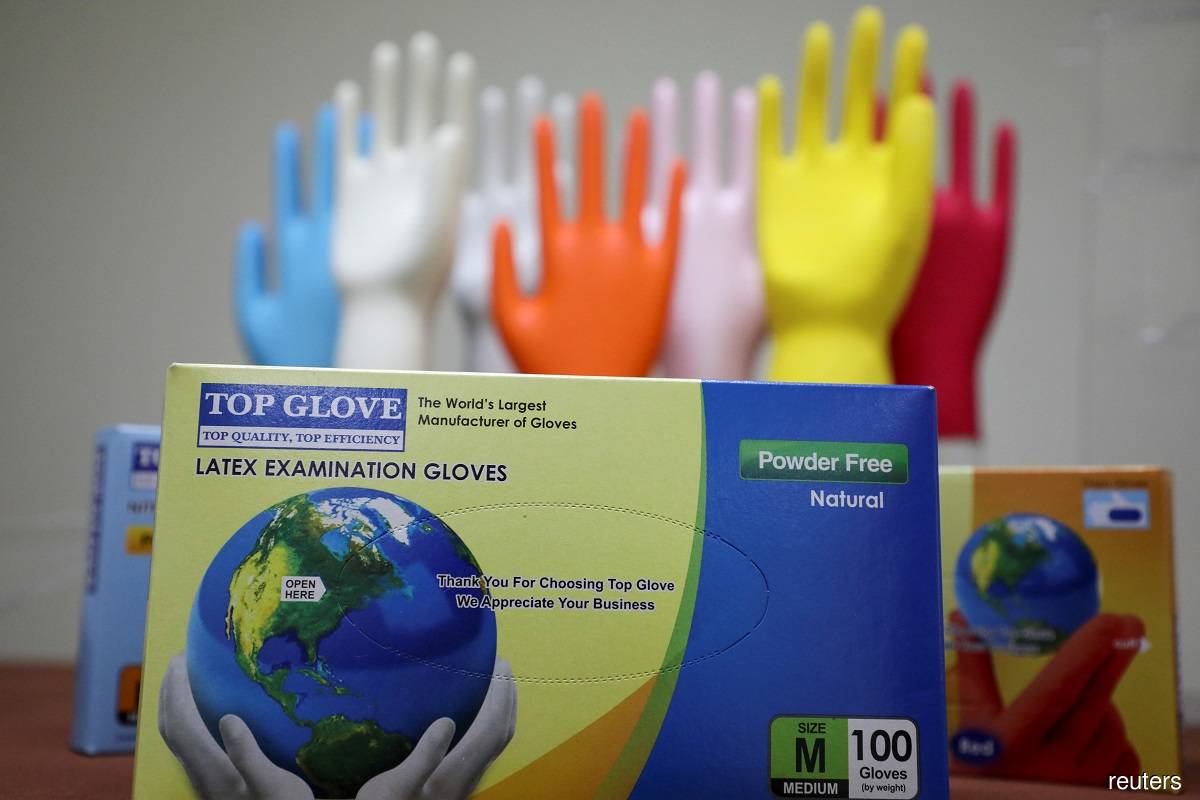 KUALA LUMPUR (Dec 8): Top Glove Corp Bhd will be releasing its result for the September to November quarter (1QFY21) tomorrow (Dec 9). The investing fraternity is expecting a record-breaking quarter with net profit of no less than RM2 billion.

On top of that, Top Glove's shareholders are probably expecting a big dividend cheque as well given the superprofit made.

According to Bloomberg, the average annual profit forecast for the financial year ending Aug 31, 2021 (FY21) is at RM8.61 billion among the 19 investment analysts who track the world's largest rubber glove maker. This means Top Glove will have to deliver a net profit of RM2.15 billion on average for each quarter in order to meet the market consensus estimate.

A quarterly net profit of RM2.15 billion would translate into 66.4% growth from the record high of RM1.29 billion in the preceding quarter ended Aug 31 (4QFY20). The jump would even be more impressive on a year-on-year basis, being 19 times higher against RM111.43 million a year ago.

Similarly, the market is expecting Top Glove to post record annual revenue with consensus estimate at RM19.74 billion, which means the company is expected to achieve a quarterly revenue of RM4.94 billion amid expectations of ballooning sales volume and sharply higher average selling prices. Top Glove's revenue was at RM3.11 billion in 4QFY20 and RM1.21 billion in 1QFY19.

According to Bloomberg, a majority of analysts are bullish on Top Glove with 15 of them having a buy or equivalent rating (75%), while four have hold calls (20%) and one rated sell (5%).

Among them, Maybank Kim Eng's analyst Lee Yen Lin is the most bullish analyst, who estimates Top Glove to post an annual net profit of RM11.22 billion in FY21, equivalent to RM2.81 billion for each quarter, while the most bearish projection is annual earnings of RM4.72 billion, or RM1.18 billion a quarter.

Some commented that the first financial quarter earnings are critical for the group as its production in the following quarter is currently affected by the Covid-19 outbreak among its workers.

When contacted, Rakuten Trade Sdn Bhd research vice president Vincent Lau said Top Glove can look forward to record earnings for its 1QFY21 and estimated it to be in line with the market's consensus of over RM2 billion, backed by growing economies of scales for glove production coupled with uptrend in average selling prices (ASPs) for gloves as demand for gloves stayed elevated in the wake of growing Covid-19 cases globally.

Geoffrey Ng, an investment adviser and director for Fortress Capital Asset Management (M) Sdn Bhd, has a similar view and concurred that Top Glove could post record earnings in 1QFY21, despite the blip in its foreign worker hostels' issue, which resulted in Klang factories' stoppage for a month due to the imposition of Enhanced Movement Control Order (EMCO), starting from Nov 17 until Dec 14.

To recap, Top Glove previously estimated the temporary shutdowns would only reduce its FY21 sales revenue by about 3%. The figure was derived after taking into account an expected EMCO of three weeks, and the expectation that 50% of its production would be impacted. Also, it added that it did not anticipate any major cancellation of orders due to temporary shutdowns.

Hartalega's net profit leapt five times to its best-ever quarterly earnings of RM544.96 million for the second quarter ended Sept 30, 2020 against the RM103.87 million posted a year ago. Quarterly revenue jumped almost 90% to RM1.35 billion from RM709.42 million. On a quarter-on-quarter (q-o-q) basis, its net profit grew more than two times from RM219.72 million and revenue also increased by 46.29% from RM920.09 million.

Against the backdrop of superprofit, Top Glove's cash pile is ballooning. As such, Fortress Capital's Ng believes the company can afford to pay special dividends to shareholders in the form of cash.

Ng does not discount the possibility of paying dividend in-specie by distributing its treasury shares it bought back on the open market.

The company has spent RM1.28 billion on share buy-back exercise since September — an amount that exceeded its cash balance of RM1.21 billion as at Aug 31.

Its chairman Tan Sri Dr Lim Wee Chai has promised to deliver a dividend yield of at least 6% for FY21 in view of the rosy earnings prospects.

Based on Top Glove's closing price of RM6.60 yesterday, a dividend yield of 6% will translate into a dividend per share of 39.6 sen.