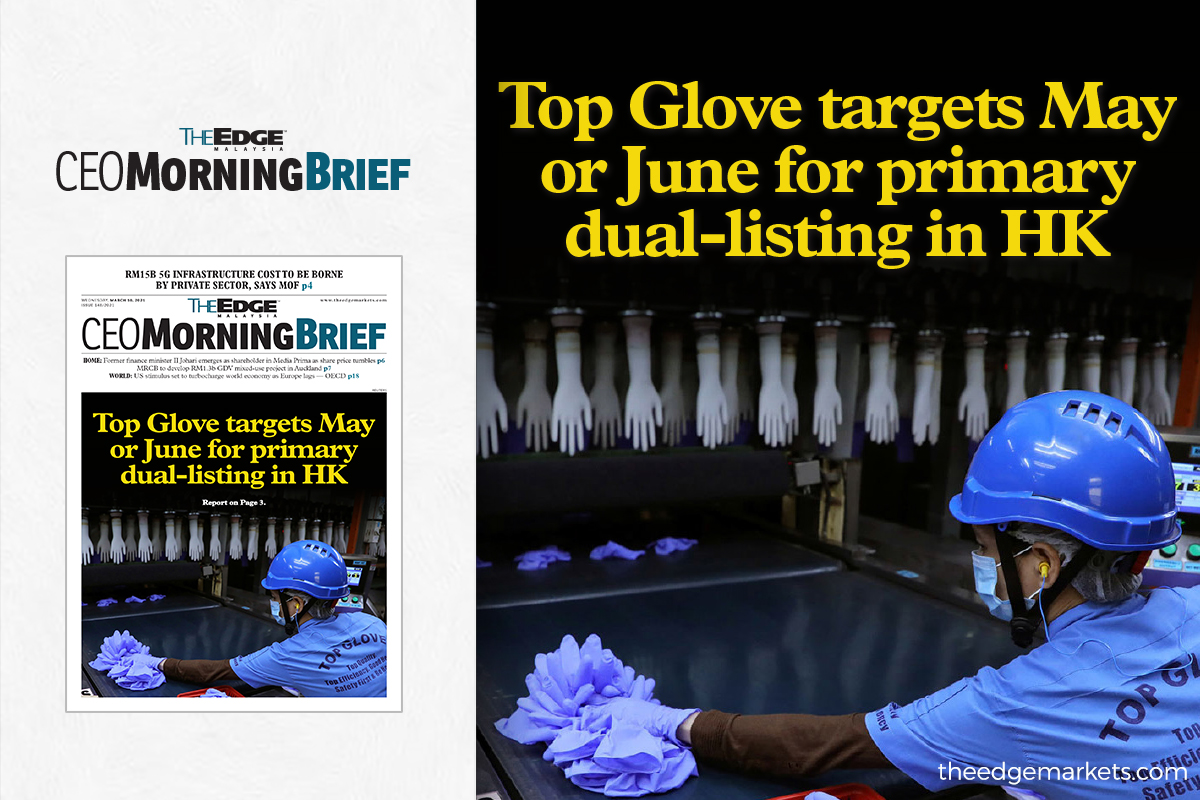 KUALA LUMPUR (March 9): Top Glove Corp Bhd’s primary dual-listing in Hong Kong will happen by May or June this year.

The timeline for the planned listing — which is expected to raise up to RM7.7 billion — will, however, depend on factors such as the Hong Kong Stock Exchange (HKEx)’s vetting process, approval from relevant authorities and market conditions, Top Glove’s executive director Lim Cheong Guan told a virtual press conference today.

The session was held in conjunction with the release of Top Glove’s second quarter ended Feb 28, 2021 (2QFY21) and half-year financials.

On Feb 26, the group said it had filed an application to the HKEx for the dual-listing, which will see Top Glove issuing 1.495 billion new shares, which is equivalent to 18.65% of its existing issue share capital of 8.2 billion shares, or 15.72% of its enlarged share base of 9.51 billion shares.

As to why the group needs to raise the billions when it is sitting on a ballooning cash pile — in line with anticipation of continued record-breaking earnings in the next three financial quarters or longer — Cheong Guan said the current conditions are simply right for the group to raise funds via equity, with Top Glove’s share price having reached a good valuation

“Top Glove's share price, while higher than pre-pandemic levels, is not at its peak, which could deter new investors,” Cheong Guan said. The planned listing is also to seize optimal market conditions when there is ample liquidity, and to avoid raising cash only when it is needed in the future, which may be hampered by factors such as high cost of funding and lack of liquidity, he added.

The proceeds to be raised will then put the group on a stronger negotiation footing when it comes to strategic business expansion or acquisition, he added.

The group has said the funds to be raised will be used to expand its production capacity and develop a data-driven manufacturing system, as well as for software system upgrades and to finance environmental, social, corporate governance practices and initiatives.

Meanwhile, the existing cash from its strong earnings from the past few quarters will be used to reward existing shareholders via dividends, said Cheong Guan, as he pointed to the group’s increased dividend payout for 2QFY21 to 4QFY21, after it committed to paying a 20% special dividend on top of its dividend policy of 50% of its profit after tax and minority interests (PATAMI).

As to the potential earnings per share (EPS) and dividend per share dilution from the dual-listing, Cheong Guan said this will be mitigated by the group’s strong profit and the previously mentioned increased dividend payout.

“Going forward, we expect the continuous expansion of the group’s business to be funded by the proceeds of the proposed offering to improve our earnings in the longer term, and to compensate for the short-term dilution,” he added.

He also said the proposed issuance size is intended to ensure meaningful liquidity of Top Glove’s shares on HKEx. “[But] we are cognizant of investors’ feedback and will take all good suggestions into considerations before we make a decision on the final issuance of new shares,” he added.

As to why the HKEx is chosen, Cheong Guan said the HKEx is a large and active market, with a market capitalisation valued at US$6.75 trillion as at March 5, 2021.

To put into perspective, the size of HKEx is 15 times larger than Bursa Malaysia (US$440 billion) and 10 times bigger than Singapore Stock Exchange (US$660 billion).

The HKEx listing is also aimed at raising Top Glove’s profile in Greater China, which it hopes will attract a new group of investors from North Asia who may not invest much in Bursa Malaysia and SGX, where Top Glove is currently listed.

On a year-on-year basis, its net profit leapt 24 times from RM115.68 million, while revenue expanded more than four times from RM1.23 billion in 2QFY20.