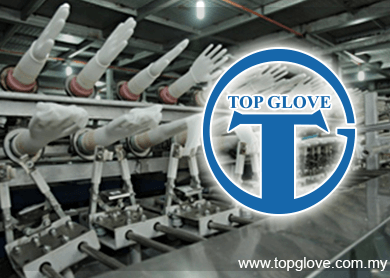 Lim said achieving a double-digit growth rate will be a challenge as labour cost has escalated.

However, the group aims to offset higher labour cost in FY15 with increased automation.

He said with the capital expenditure (capex) spend to increase automation throughout its manufacturing process, especially in the nitrile glove packaging segment, the group can save labour cost by half.

Lim added that with automation and improved efficiency, the group has managed to reduce its head count by 1,000.

“This is the correct direction,” Lim told a media briefing today.

Lim is of the view that FY15 will be a better year for Top Glove with better profit margin on the back of falling crude oil prices and the weakening ringgit against the US dollar.

“FY15 will be a tailwind (for Top Glove), but we still have to work not only hard, but smart,” Lim said, maintaining that the the group’s gain on falling crude oil prices is only “temporary” as oil prices move in cycles. Brent crude oil has fallen more than 50% to US$51.50 yesterday from US$115 in June last year.

The softening natural rubber prices for the past few months is also a boost to rubber glove margin, which stands close to 20% now, as the average selling price of rubber gloves has not dropped as much as the raw material price.

Despite fiercer competition among glovemakers in Malaysia, Top Glove expects its share of the global market to rise to 30% by 2020 from 25% currently, said Lim.