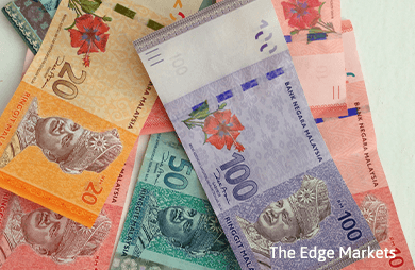 KUALA LUMPUR (Jan 10): Malaysia’s ringgit is set to rebound from a 19-year low as official measures to boost demand for the currency kick in, according to a top banker and member of the central bank’s financial markets committee.

An appreciation of the ringgit can happen very quickly, said Lee Kok Kwan, who is also president of the Financial Markets Association of Malaysia and a director at lender CIMB Group Holdings Bhd. He pointed to three such periods of gains in the past 15 months including one when the currency surged as much as 7.4 percent in a space of a week.

“The ringgit is bottoming," Lee, who is part of the committee tasked to develop strategies for the nation’s bond and currency markets, said in an interview on Friday. "Malaysia’s fundamentals are steady and look decent. The trade and current account surpluses should improve just because imports will come off as the ringgit is weaker."

The ringgit has lost about 22 percent since the start of 2015 and is the worst-performing currency in emerging Asia, weighed down by the dollar’s strength and weak commodity prices. On Jan. 4, it breached 4.5 a dollar for the first time since 1998 as investors continued to sell down emerging-market assets and after a crackdown on currency speculators last month exacerbated outflows.

Lee’s prediction of a rebound contrasts with analysts in a Bloomberg survey, where the median is for the ringgit to trade at 4.52 against the dollar at the end of the first half, and for it to weaken to 4.57 by the end of 2017.

The ringgit, if benchmarked against commodity currencies such as the Australian and Canadian dollars, should be at about 3.90 a dollar, Lee said. The country is Asia’s only net oil exporter and world’s second biggest palm oil producer. He declined to provide the level the ringgit may strengthen to. It was around 4.4770 on Monday.

There’s an equivalent of 977 billion ringgit ($218.2 billion) in direct investments abroad by local businesses, as well as overseas portfolio holdings of Malaysian funds and onshore foreign currency bank deposit balances, he said. The beneficiaries are sitting on unrealized foreign exchange gains and may choose to convert to ringgit or hedge to lock them in.

“These gains can evaporate if the ringgit strengthens,” Lee said. "In the past, from end-2015 till now, every time the currency strengthens, it can really gap because of the herd effect of locking in off-size gains."

The central bank in Malaysia in November stoked fears of a return to capital controls -- which were imposed during the 1998 currency crisis and had since been removed -- when it clamped down on foreign banks using offshore forwards to bet against the ringgit.

Most "hot money" has left Malaysia since the measures were implemented and “speculative” selling of government securities has tapered off, Lee said. This is reflected in yields of local currency treasury bills, currently trading above the benchmark overnight policy rate of 3 percent, he said.

The  yield on the three-month Bank Negara notes climbed to 3.17 percent on Monday from 2.52 percent at the end of September, while those for government bonds maturing in 2019 rose to 3.38 percent from 2.88 percent over the same period, according to data compiled by Bloomberg.

The central bank also recently required companies to convert at least 75 percent of export proceeds into the local currency.

Such measures will “significantly improve” Malaysia’s risk profile, Lee said. There has been a structural imbalance in the supply and demand of the ringgit because importers can sell it and buy all the dollars they want while exporters aren’t restricted from keeping their entire proceeds in the greenback.

Bank Negara Malaysia’s statistics show only 1 percent of export proceeds were converted back into ringgit over the last few years, Lee said. Now, with the mandatory conversion and the country running a trade surplus, “there will be a proper bid and offer in the forex market and a lot more support for the ringgit,” he said.

“The move requiring exporters to convert their proceeds to local currency is consistent with measures taken in countries bigger than Malaysia,” Lee said. "An open capital account risks dollarizing the domestic economy.”