Too early to tell impact from Suez Canal blockage 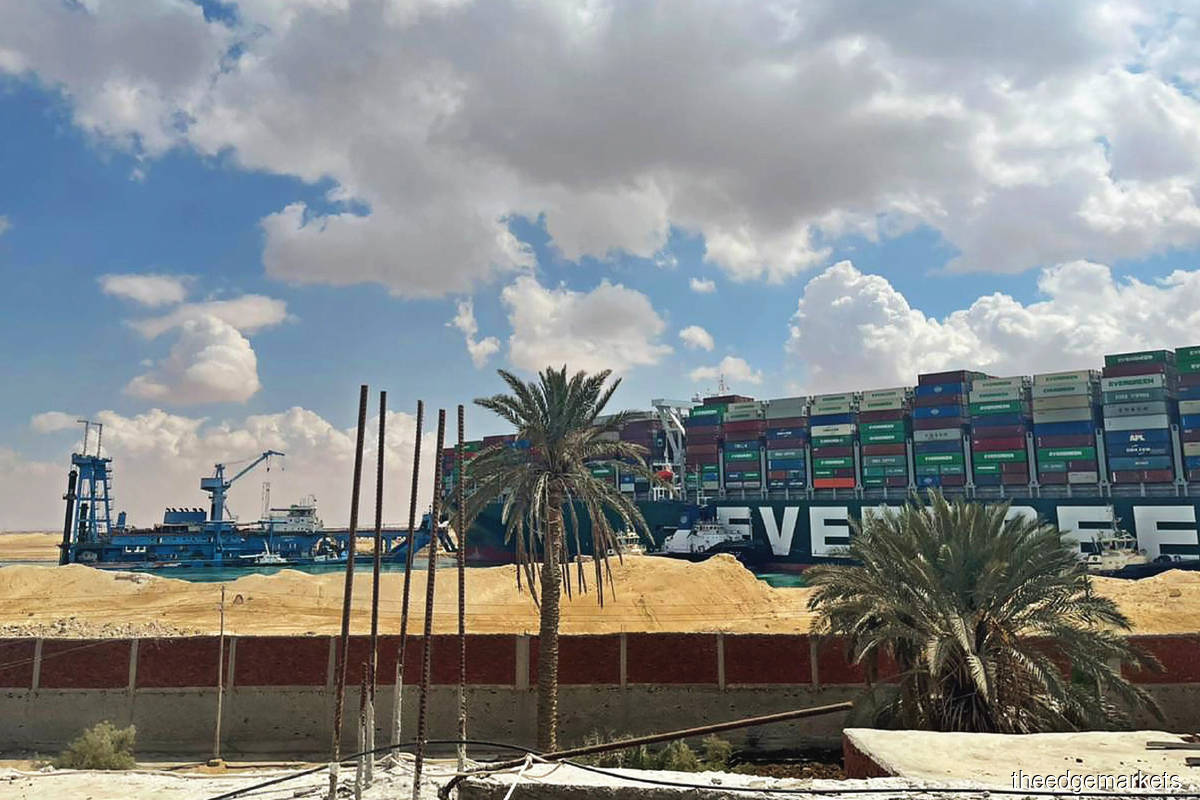 The Ever Given was en route from Shenzhen to Rotterdam, the Netherlands, when it encountered a power failure and veered to the Suez Canal’s bank and ran aground. (Photo by Bloomberg)

IT could have been a scene straight out of Hollywood. A giant vessel with the capacity to carry 20,388 TEUs, or 20ft equivalent units, stuck in the middle of one of the world’s busiest shipping choke points and causing immeasurable delays to the transport of US$3 billion worth of goods per day.

Registered in Panama, the MV Ever Given has been wedged in the Suez Canal since March 23, when it ran aground after experiencing power failure, making the vital waterway inaccessible to vessels trying to reach Europe from Asia and Australia, and vice versa.

From the shortage of shipping containers to chips supply, the incident is the latest in a string of events that have caused disruptions to the global supply chain since the outbreak of the Covid-19 pandemic early last year.

Industry players are still trying to gauge the impact of the Suez Canal closure, and the duration needed to dislodge the vessel. It is still too early to determine the extent of the impact on the global supply chain, says Westports Holdings Bhd CEO Datuk Ruben Gnanalingam.

“It is way too early to tell. We are still gauging what shipping lines want to do. They are trying to gauge how long it will take to get [the problem] fixed. It is a situation with many potential outcomes. Way too early to even speculate. No precedent,” he says when contacted by The Edge.

Services to Europe make up less than 10% of the total shipping services from Westports, says Gnanalingam of Malaysia’s largest port, which handles around 35% of the country’s trade in containerised goods.

According to the port’s fourth quarter ended Dec 31, 2020, financial results slide, the Asia-Europe trade made up 17% of Westports’ total container volume handled of 10.5 million TEUs during the year, the second largest segment after the intra-Asia trade.

As at last Friday, efforts to refloat the ultra-large container ship were ongoing, with eight tugboats being deployed by the Suez Canal Authority. The Ever Given is one of the longest container vessels in operation in the world, with an overall length of 399.94m. It is owned by Shoei Kisen Kaisha Ltd and wet-leased to Taiwan’s Evergreen Marine Corp.

The vessel was en route from Shenzhen to Rotterdam, the Netherlands, when it encountered a power failure and veered into the canal’s bank and ran aground.

While the Asia-Europe trade makes up less than a quarter of the containers handled at Westports, global supply chains are interconnected. Therefore, the impact of the Suez Canal closure on Malaysian trade cannot be understated.

Datuk Shamsuddin Bardan, chairman of the Malaysian Employers’ Federation (MEF), says should the Ever Given take longer to be refloated, ships travelling between Asia and Europe will have no choice but be diverted and go around the Cape of Good Hope, which takes about a week longer to navigate.

“The incident added to the problems of the shortage of shipping container space and Covid-19 safety procedures that have been causing delays at ports. It is hoped that the vessel can be freed as soon as possible to minimise the disruptions and delays in delivery of imports and exports,” he says when contacted by The Edge.

How much more it would cost for a vessel from Asia to Europe to reroute and circle the African continent is hard to say.

As at last Thursday, 47 container vessels carrying 540,716 TEUs were waiting in the Suez Canal area, an increase of 42.5% in TEUs within less than 24 hours, according to project44, a cloud-based platform that provides key transport information to shippers and logistics players.

In a statement sent to The Edge, project44 says just as there is more cargo waiting at Chinese ports for vessels to transport it to European markets, the delays are equally problematic in the Europe-Asia direction.

Given the number of vessels that are affected, carriers’ networks could be disrupted for weeks and months. The ability to divert cargo, manage expectations and adjust in real time is imperative for shippers, says the firm.

“Once the logjam is removed, major ports in Rotterdam, Antwerp and Hamburg will be swamped,” says project44 CEO Jett McCandless.

“That congestion will have rolling effects further down the supply chain for months to come, exacerbating an already problematic situation at major European ports. With inventories dropping as a result, unfortunately that means the costs will be passed on to consumers.”

Tan Sri Soh Thian Lai, chairman of the Federation of Malaysian Manufacturers, says the Suez Canal blockage is largely expected to impact European shippers as it would lead to port congestion and cause delays for exports, as well as the ability to get the empty containers available in Asia.

Daniel Harlid, a vice-president at Moody’s Investors Service, makes a similar observation. In a statement issued last Thursday, he says Europe’s manufacturers and auto suppliers are the most affected by the closure of the busy waterway as they operate “just-in-time” supply chains.

“Even if the situation is resolved within the next 48 hours, port congestion and further delays to an already-constrained supply chain is inevitable. For container shipping, the effect is credit-neutral, though carriers diverting their vessels around Africa instead of going through the Suez Canal will see costs rise. Spot freight rates will also most likely increase or at least stop decreasing from their currently very high levels,” says Harlid.

The Port Klang Authority, however, is confident that the closure will have minimal impact on Malaysia. According to a Bernama report, its general manager Captain K Subramaniam says the country’s ports are equipped to handle more than a ship at a time, if there is a delay in the arrival of ships.

Among Malaysia’s ports, only Port Klang and Port of Tanjung Pelepas (PTP) receive ships from Europe. Another terminal operator at Port Klang is Northport (M) Bhd, which is part of MMC Corp Bhd. MMC also owns 70% of PTP.