Tony Fernandes in Time’s list of world’s most influential 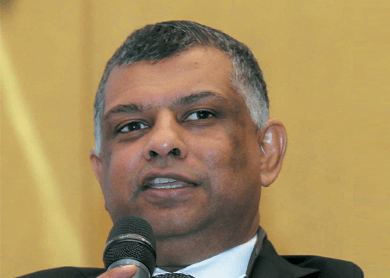 (Apr 17): AirAsia CEO and co-founder Tan Sri Tony Fernandes has been named among the 100 most influential people in the world by Time magazine.

The annual list in its 12th year takes into account activism, innovation and achievements of the world's most influential individuals.

Fernandes co-founded the budget airline in 2001 with partner Datuk Kamarudin Meranun and purchased the then loss-making AirAsia from its Malaysian owner for RM1 along with its US$11 million (RM40 million) debt.

Fernandes said in a statement today that it was a tremendous honour to be included in the top 100 list, adding that he was initially shocked upon hearing the news.

“I was shocked when I first received the news, but I am very proud and humbled.

“This has been a challenging year but my entire career has been about challenges and with every obstacle, we learn and become even better," he said.

He said that this year, he would refocus his attention on his core businesses starting with AirAsia.

"We have always been about serving the underserved, whether it be through our services and products or giving chances to our staff where we have pilots who used to be purchasing assistants, department heads who started as baggage handlers and flight attendants who used to be administrative assistants.

"My hope is that the work we do through AirAsia and Tune Group enables and inspires the next generation of Asean entrepreneurs and SME owners and propels them into success," he said.

Fernandes also thanked his staff across all his businesses in AirAsia, Tune Group, QPR and Caterham for standing by him through everything.

"Together, we will continue to disrupt the market," he said.

AirAsia is currently the largest low-cost carrier in Asia, servicing over 90 destinations.

In the last 13 years, the budget airliner has carried over 280 million passengers and now boasts of over 190 aircraft from just two.

AirAsia has been named the World’s Best Low Cost Airline in the annual World Airline Survey by Skytrax for six consecutive years from 2009 to 2014. – The Malaysian Insider