STOCKS on the local bourse traded on stronger footing last week. Following a torrid start to 2015, the FBM KLCI stringed together two consecutive weeks of gains. The benchmark index closed at 1,803.08 last Friday, having recovered all lost ground and is now up 2.9% for the year-to-date.

The local bourse rode on improved sentiment in global stock markets. Most bellwether indices in the region too ended in positive territory last week. Investors were generally bullish in the run up to the European Central Bank’s meeting last Thursday. There were widespread speculations the ECB will launch large scale quantitative easing, in the footsteps of the US Federal Reserve and Bank of Japan. This is essentially the last major option left to fend off deflation in the eurozone and prop up the faltering economy. With the latest December inflation data falling into negative territory, pressure on the ECB to act was high.

And the ECB did not disappoint, duly announcing a programme to buy some 60 billion euros of assets, including government and private sector bonds, each month through September 2016.

The other notable development last week was the release of China’s 4Q14 GDP, which came out marginally ahead of street estimates. For the full-year 2014, China grew 7.4%. Whilst this is the lowest growth in 24 years, it does suggest a more balanced economy — the shift away from investments (including property) to domestic consumption will underpin more sustainable, quality growth over the longer-term.

The positive sentiment in stock markets also extended to the oil market. Prices traded steadier through the week, a relief from recent sharp losses. At the end of the week, prices bounced higher on news of the death of King Abdullah of Saudi Arabia, the biggest producer in Opec. His passing created some uncertainties. Specifically, there are questions as to whether this will bring about a change to the country’s current policy on production. At the point of writing, Brent crude futures are hovering around US$49.50 per barrel.

Back home, our prime minister unveiled a revised Budget 2015, making adjustments for sharply lower oil prices. Notably, the country’s GDP was lowered to 4.5-5.5% (from 5-6%) while budget deficit was raised to 3.2% (from the original 3% of GDP). The current account surplus is expected to narrow.

The headline numbers did not generate much of a response from the market, save for scepticism from certain quarters. The downward revision had been widely anticipated.

The ringgit, however, dropped to fresh six-year low, breaking well past the 3.61 threshold. Fitch Ratings indicated a probable downgrade of the country’s sovereign credit rating on the back of weaker economic fundamentals. Stocks in my portfolio performed better than the FBM KLCI last week, gaining some 3.7% compared to the index’s 3.4% advance.

Total value of my portfolio is up 5.2% since inception, little more than three months back. My portfolio continues to outperform FBM KLCI, which has fallen by1.5% over the same period.

I did not make any additional acquisition last week, despite the stronger sentiment in the broader market. My portfolio is currently 75% invested.

We are looking at an unfolding Chinese New Year rally. In the short-term, global markets will continue to rise on the expectations that US interest rates will now be deferred further following the ECB’s massive QE announcement.

However, I am sceptical the uptrend in the local bourse is sustainable beyond the next few weeks.

The country’s reserves continued to decline, hitting the lowest level since March 2011 at US$111.2 billion. This is the result of the combination of capital outflows and central bank intervention to smoothen the ringgit’s drop.

Statistics show that foreign fund selling in the equity market was intense in the first three weeks of this year. This will most likely persist. Market gains are currently being supported by local institutional funds.

My general bearishness also stems from the fact that analyst expectations remain far too upbeat on corporate earnings and prevailing high valuations for the broader market are not reflective of both earnings and dividend growth prospects. 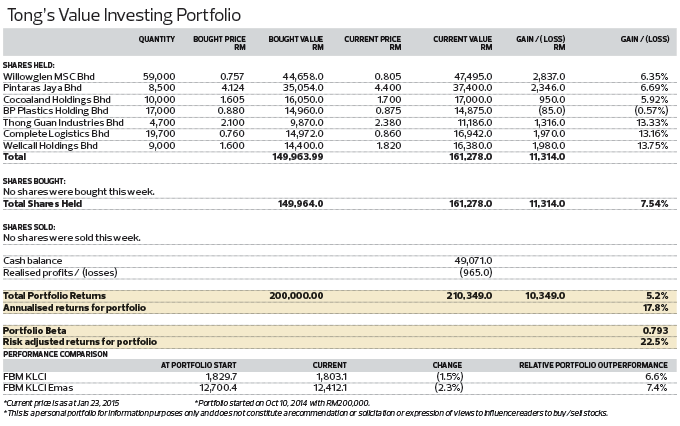