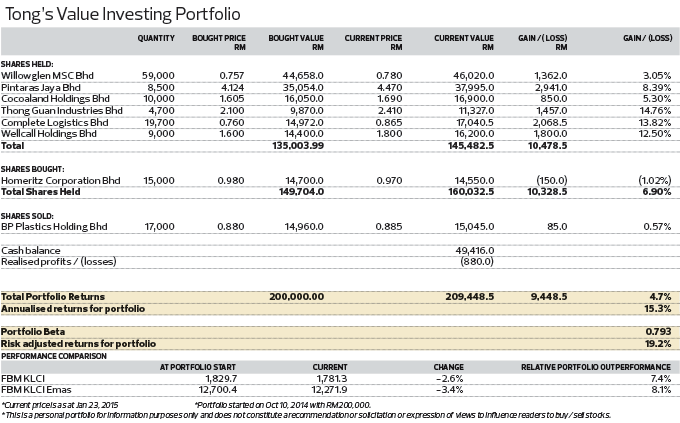 STOCKS on the local bourse came under renewed selling pressure last week. The benchmark FBM KLCI closed 21.82 points lower at 1,781.30, giving back part of gains from the previous weeks. Still, it did manage to finish in positive territory for the first trading month of 2015. The benchmark index is up 1.6% for the year-to-date.

Foreign investors remain net sellers with local institutional funds stepping in to buffer the fallout. Notably, retail investors are generally more cautious. I am still fairly upbeat on the stock market over the coming few weeks, but purely from a short-term trading perspective.

To be sure, there is a marked increase in volatility in global markets, led by Wall Street. However, recent moves by central banks suggest global interest rates will stay low for a prolonged period. This is positive for risky assets including equities.

Central banks have certainly been hogging the headlines in recent days. First, the Swiss National Bank shocked financial markets by abandoning its currency peg to the euro. Then the European Central Bank (ECB) surprised with a bigger than expected quantitative easing (QE) programme, totalling 1.1 trillion euros, after months of speculations. The Bank of Japan (BOJ) has already announced an expanded QE last October.

Both the ECB and BOJ are aiming to devalue their currencies to boost flagging growth and fight off the threat of deflation, which is being compounded by cheap oil.

A currency war is now in full swing. Central banks from Denmark to India and China have all announced cuts to interest rates. The Monetary Authority of Singapore is the latest to join the fray, reducing the slope of its policy band to slow the appreciation of the Singapore dollar.

The latest January statement from the US Federal Reserve was a bit more confusing to investors. On the one hand, it gave an upbeat assessment on the economy and labour market, which suggests it is on track to hike rates around mid-year. On the other hand, it also mentioned taking into account financial and international developments when deciding on the timing for raising rates, which seems to hint at a delay.

Uncertainties mean we are likely to see more volatility, in both the currency and stock markets in the days ahead.

Regardless, the greenback’s uptrend is intact, supported by strengthening US economy, expectations of rising rates and as a safe haven. The ringgit continued to weaken against the US dollar, trading around 3.625 at the point of writing — down 3.5% in just one month.

In other developments, oil prices appear to be consolidating between the US$45-US$50 per barrel range in the absence of fresh leads. Meanwhile, the new anti-austerity government in Greece is raising some concerns. Though the eurozone has implemented stronger safety net since 2012, fallout in a worst-case Greece exit will still roil financial markets.

Stocks in my portfolio closed mostly lower for the week, mirroring the broader market’s losses. Total value of my portfolio was down 0.43% but remains up 4.7% since inception. My portfolio continues to outperform FBM KLCI, which has fallen by 2.6% over the same period.

Followers of my portfolio will recall that I intended to buy all of InsiderAsia’s Top 10 recommendations for 2015 at the start of the year. However, the stocks all rallied immediately after the list was published (in the January 5th issue). I have been waiting for some price corrections to buy. Table 1 shows that all the stocks are still trading at prices well above the levels on January 2.

Share prices for Homeritz rallied as high as RM1.11 but fell back to 0.97 sen at the end of last week. This was after the company released weaker than expected results for 1QFYAug15 where pre-tax profit fell 21.8% on the back of 6.5% decline in sales. Margins were affected by higher leather raw material prices and lower utilisation.

Nevertheless, I believe its longer-term outlook remains intact. The weakening of the ringgit since end-November is positive for Homeritz’s margins — almost all of its sales are exported. Demand is expected grow at a steady pace.

Homeritz’s balance sheet remains strong with net cash of RM47 million. This will support its minimum 40% payout policy. Dividends totalled 5.1 sen per share in the last financial year or equivalent to roughly 50% of profits, and translating into net yield of 4.8%.

I bought 15,000 shares in Homeritz at 98 sen per share. I also disposed of all my holdings in BP Plastics, whose shares have not performed as expected. Following these transactions, my portfolio is about 75% invested. 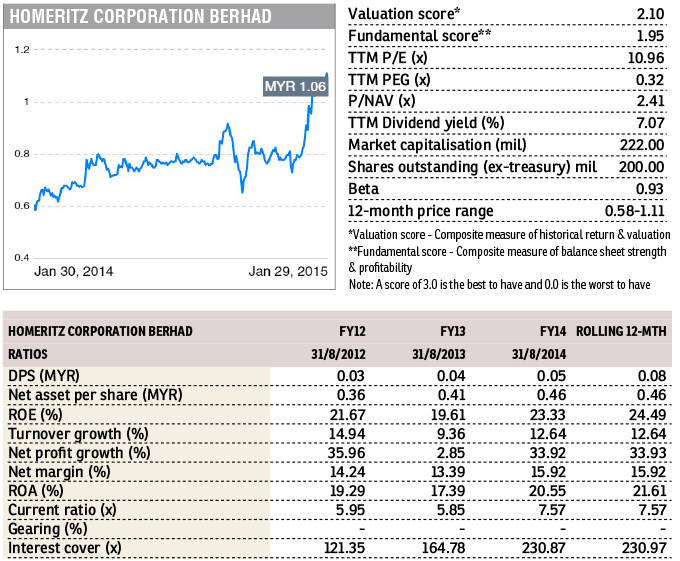