SENTIMENT ON the local bourse remained weak. The FBM KLCI closed in the red for the second straight week, even though benchmark indices in the key regional markets traded broadly higher.

Stocks in the oil & gas and plantation sectors are being dragged down by falling prices. Brent crude oil fell well below the US$80 per barrel threshold while CPO prices are hovering just above the RM2,200 per tonne levels.

Malaysia’s GDP growth in the third quarter slowed to 5.6%, down from 6.4% in 2Q14. Our current account surplus narrowed while portfolio investment outflow rose. The decline in the ringgit against the US dollar is further depressing investor confidence.

Against this backdrop, weakness in the local stock market may well persist in the near term. As such, I am taking a slightly more defensive stance by adding some high-yielding stocks to my portfolio.

I bought RM17,160 and RM9,870 worth of shares in Tasek Corp and Thong Guan Industries. Both stocks give higher than average market yields.

Thong Guan is one of Asia Pacific’s largest producers of plastic packaging, including thin stretch film, garbage bags, PVC food wraps and industrial films. It is export oriented – overseas demand accounted for about three-quarters of sales in 2013.

The company reported double-digit turnover growth over the past three years. Turnover increased from RM489 million in 2010 to RM720 million last year. In 1H14, the company’s turnover was up 7.5% to RM374 million from the previous corresponding period. Net profit grew an outsized 55% to RM16.7 million, from RM10.8 million over the same period. The company should benefit from cheaper raw material prices, which are closely correlated to oil prices.

Dividends were raised from 6 sen in 2011 to 8 sen last year – and could rise further this year in line with earnings expansion. Thong Guan has net cash of RM9.4 million.

Tasek Corp, an Ipoh-based cement manufacturer, also ranks high in terms of valuations and fundamentals, scoring 2.1 and 2.7 out of 3, respectively.

The company has fared well through the years, generating consistent earnings, if not strong growth. It has maintained relatively high margins. Revenue for the 9M2014 totalled RM483.1 million, already 83.7% of 2013’s full-year earnings. Net profit for the 9-month period was RM77.5 million, or 82.5% of 2013’s full-year profit.

Given its stable operating cashflow and strong balance sheet – net cash totalling RM336.1 million as at 30 June 2014 – Tasek is likely to maintain a high dividend payout to shareholders. Last year saw dividends increased to RM1.44 per share, which translates to an attractive yield of 8.6% based on current price of RM16.80. 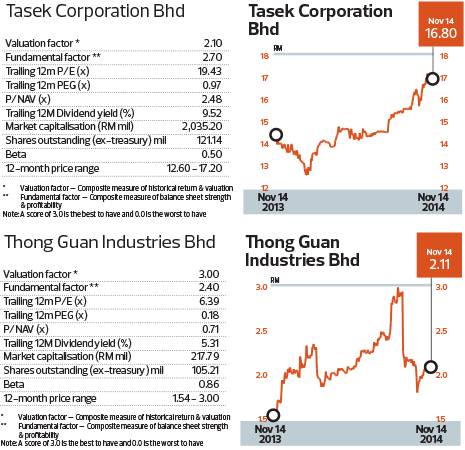 Nevertheless, I am still confident in their prospects over the longer-term. In fact, I added to my existing investments in Pintaras Jaya and Crescendo Corp, capitalising on prevailing price weakness. I believe both stocks are still undervalued relative to their intrinsic worth.

After taking into account last week’s purchases, my portfolio is now 78% invested.

Total portfolio return stands at 2.4% since inception, still outperforming the FBM KLCI, which has fallen by 0.9% during the same period.

I believe that over time, this portfolio will continue to outperform – regardless of whether the broader market goes up or down – because asset prices will ultimately be driven by yield. 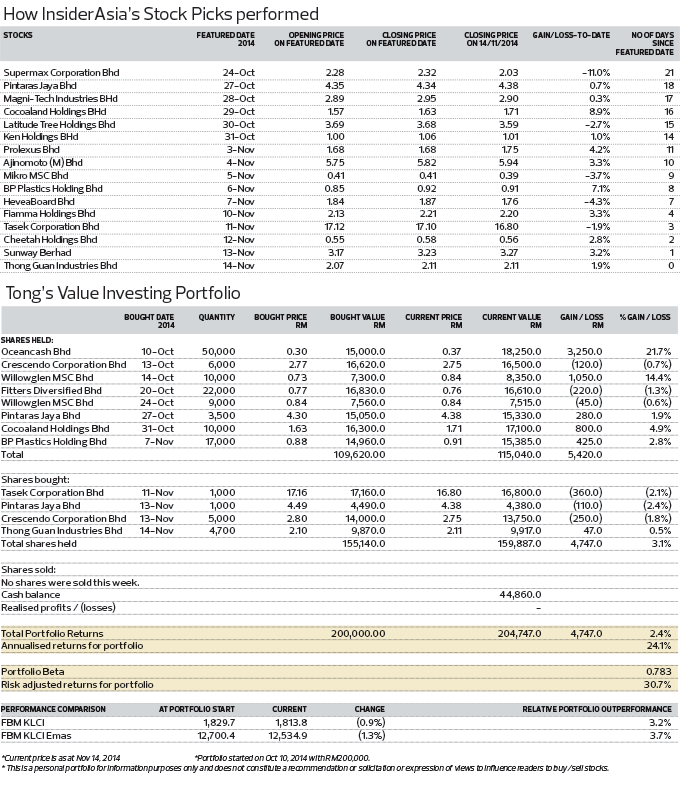