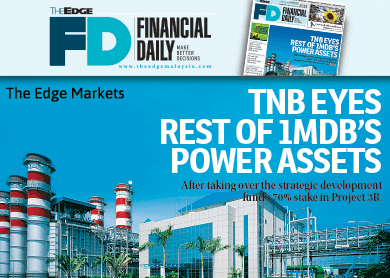 The news could reinforce “bailout fears”, that has already cast a pall on TNB’s share price performance. This comes shortly after the investing fraternity breathed a sigh of relief that the national utility managed to strike a fair deal to take over a 70% stake in Project 3B — which involves the construction of a power plant in Jimah, Negeri Sembilan.

In a filing with Bursa Malaysia yesterday, TNB said it has submitted an indicative non-binding proposal to acquire five domestic and eight international power assets from Edra.

Khazanah Nasional Bhd and the Employees Provident Fund (EPF) collectively hold a 45.56% stake in TNB. However, Khazanah would be a related party as the Ministry of Finance is its sole shareholder, likewise for 1MDB.

As such, the EPF would play a crucial role in 1MDB’s power asset sales should TNB strike another deal with the strategic investment fund. Khazanah holds a 29.66% stake, the EPF 15.9% and Amanah Saham Bumiputera 8.86% in TNB.

TNB (fundamental: 1.3; valuation: 1.8) said Edra’s power assets would be a “strong fit” for its growth strategy, as it would help ensure the long-term continuity of steady and competitively priced power to the public.

In addition, the utility group noted that the proposed acquisition would allow TNB to establish its international presence in areas where the demand for power is growing.

However, TNB pointed out that the group is in the initial stages of its assessment of Edra’s power assets, adding that there is no assurance that any transaction will be concluded.

“Any potential transaction would need to make strong commercial and financial sense and be value accretive to TNB’s shareholders. Any transaction would also be assessed based on the highest standards of corporate governance,” said TNB.

It added that any transaction would only be completed following TNB’s in-depth due diligence on the assets.

TNB will have to seek approval from non-interested shareholders and procure all relevant approvals, consents, waivers and clearances from governmental, regulatory authorities and third parties.

In a separate statement yesterday, 1MDB said it welcomes TNB’s interest in Edra as it forms part of the investment fund’s plan to monetise its power assets.

“1MDB has also received indicative, non-binding offers from other local and international parties in relation to our power assets as part of the process to monetise our investment in Edra.

“Our board of directors will review the various proposals received in due course, following which select parties will be invited by 1MDB’s financial adviser to conduct further due diligence on Edra, culminating in the submission of binding offers for our board’s consideration,” said the statement.

“In assessing these offers, the board will be guided by, among other things, value maximisation to 1MDB’s shareholders, deal certainty, and terms that are fair and reasonable,” said 1MDB, which is currently under investigation by the parliamentary Public Accounts Committee on its dealings, including asset acquisitions that have racked up RM42 billion in debt.

The investment fund, which is wholly owned by the Ministry of Finance, is facing tight cash flow as its assets, which are mainly power plants and land, are not generating enough money to service its debts. Hence, it is looking for buyers for its power plants and land in Tun Razak Exchange in the capital.