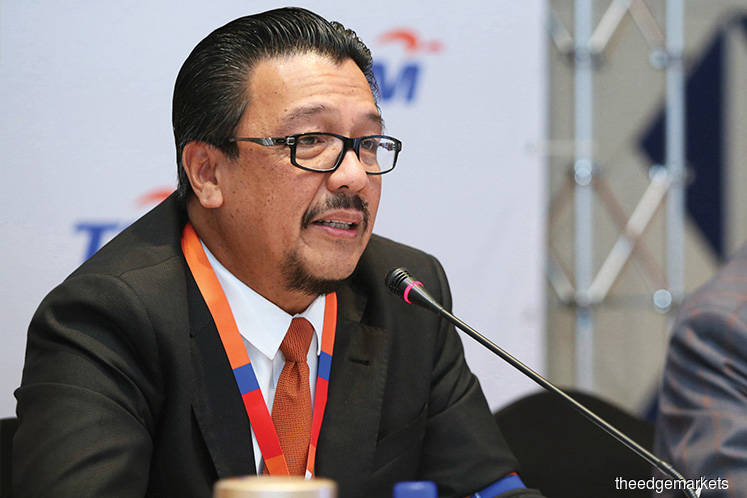 KUALA LUMPUR: Telekom Malaysia Bhd (TM) has missed its 3.5% to 4% revenue growth target for the financial year ended Dec 31, 2017 (FY17), which was among its headline key performance indicators (KPIs) for the year, according to its Bursa Malaysia filing yesterday.

Its FY17 revenue only grew 0.2% to RM12.09 billion from RM12.06 billion in FY16 on the back of higher Internet revenue contribution. Annual net profit rose 19.81% year-on-year to RM929.75 million, thanks to foreign exchange (forex) gain on borrowings in the current financial year compared to losses in FY16.

The group declared a second interim single-tier dividend of 12.1 sen for FY17, bringing its full-year payout to 21.5 sen. The dividend will be paid on April 13.

Besides revenue growth, its other KPIs involve earnings before interest and tax (Ebit) and customer satisfaction measure. In terms of Ebit, TM managed to meet its KPI by keeping it at FY16's level of RM1.19 billion, by registering a growth of 0.2%. Likewise for customer satisfaction, for which it targeted 73 points based on its TRI*M or measuring, managing and monitoring index, it achieved above that but gave no absolute figures.

Going into FY18, TM guided that its KPI target for revenue growth remains at 3.5% to 4%, and that it will maintain Ebit at the current level.

“We saw [Unifi] Arpu trended down a little bit because of a larger base of subscribers in this segment, which was due to the migration of subscribers from pre-Unifi (formerly known as Streamyx),” she said.

However, she said TM’s management is “aggressive” in expanding its subscriber base and the group remains “positive” about its prospects for FY18, despite seeing a 5.6% y-o-y decline in earnings before interest, taxes, depreciation and amortisation to RM3.58 billion in FY17.

“We are still in the investing stage for our LTE (long term evolution) network products and services; the increase in cost [for FY17] was largely due to our mobile [segment] expansion; there were several expenditures related to mobile: one was network operation cost and the other was site rental,” she said.

“In terms of mobile operation [in FY18], we will continue to expand. So in that aspect, yes [cost will continue to increase]. But we are also upbeat about our prospects, [so] that [increase in cost] will be cushioned by our revenue growth,” she added.

During the media briefing, TM group chief executive officer Datuk Seri Mohammed Shazalli Ramly also updated that the group is in the midst of formulating the collaboration plan with Tenaga Nasional Bhd (TNB), and he is uncertain about the role Broadnet Networks Sdn Bhd plays under the Nationwide Fiberation Plan (NFP).

“We are not sure about the company (Broadnet), and none of us have spoken to anybody from the company. We are still crafting the collaboration with TNB, and we will make [an] announcement when we are ready,” he said.

On Jan 16, TNB and TM inked a memorandum of understanding (MoU) to jointly develop an implementation plan to deliver the government’s NFP. The NFP is a last-mile fiberisation project to provide high-speed broadband services to all households.

The MoU came after the government appointed Broadnet — a new company reportedly aiming to be the second provider of high-speed broadband in the country — to partner TNB to undertake the NFP, with a RM1.5 billion incentive provided by the government.