TM hopes to sign partnership contract for HSBB2 with govt 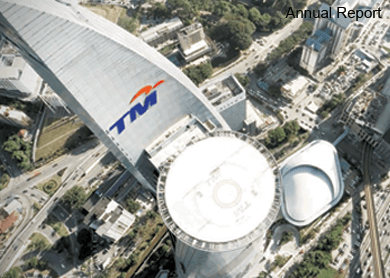 With the P1 acquisition, TM intends to be a convergence champion within 3-5 years, with a seamless network capable of supporting all customers anytime, anywhere, with any device. P1 is targeting to launch its 4G long-term evolution services this year.

TM’s 2015 capital expenditure (capex)/sales guidance is 20%, excluding its high-speed broadband Phase 2 (HSBB2), suburban broadband (SUBB) and P1, with capex expected to peak in 2016 on the full impact of the mega projects. TM hopes to sign the public-private partnership contract for HSBB2 with the government this year. Currently, the capex ratio has not been decided.

TM-P1 does not intend to position itself as the fourth/fifth mobile operator. It wants to be the first digital mobile operator in Malaysia and number one in convergence.

The interview with TM did not yield much new information, especially with regard to its strategy for P1, guidance on its potential losses, and when it expects an earnings turnaround.

While TM says it is not positioning itself to compete head-on with the mobile incumbents, we think this is inevitable as the mobile business becomes increasingly data-centric.

We believe it will be very challenging for P1 as incumbents have much stronger branding and established sales and distribution networks.

In the absence of any new information on HSBB2, we maintain our assumption of a 50% government grant for financial year 2015 (FY15 to FY18) in our earnings model.

Maintain “reduce”. We expect earnings dilution from P1 to build up over FY15 to FY17. 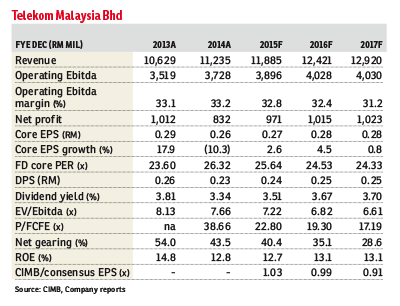