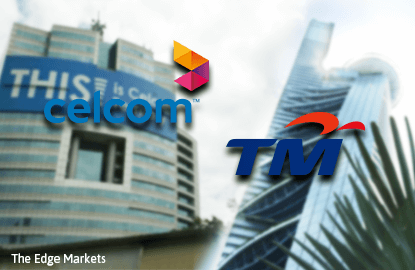 In return, Celcom will have access to enhanced network facilities and infrastructure provided by TM.

In a bourse filing today, TM said it has entered into a domestic roaming services and facilities agreement with P1 and Celcom to effect the roaming arrangement.

TM and P1's agreement with Celcom entails a strategic business cooperation that enables P1 to provide domestic roaming services as part of its plan to deliver seamless access for mobile network connectivity to its customers, said TM.

"At the same time, the infrastructure collaboration agreements with Celcom, Celcom Mobile and Celcom Networks will provide wholesale arrangement on fibre backhaul connectivity through the NGBH and HSBA for Celcom's mobile access sites and broadband coverage," it added.

"The collaboration facilitates our effort to further expand our mobility proposition, fully complementing our fixed broadband services for a true convergence experience.

"Towards this, P1 is currently working together with us in conducting user trials and network readiness tests for the upcoming mobile services launch; a crucial process that is also made possible through this strategic collaboration," said Zamzamzairani.

TM added that within the collaborative arrangement there, will also be an extension of the agreement for Celcom's access to TM's HSBB network.

"This will enable the country's leading data provider to offer fixed broadband services, both for business to customer and business to business segments on top of its mobile offerings," it said.

With that, Celcom's network nationwide coverage and capabilities would be extended beyond its current capacity with the progressive roll-out of its long term evolution (LTE) network.

Further, TM said the collaboration will help to avoid unnecessary duplication of network infrastructure and it is a strategic move by both companies to be more operationally efficient.

The proposed domestic roaming agreement is for a minimum five years with an automatic renewal for a further period of five years while the infrastructure collaboration period ranges from one year to ten years based on the services provided.

TM said the collaboration is not expected to have any material effect to the earnings and net assets of the TM group for the financial year ending Dec 31, 2016 but it is expected to contribute positively to its future earnings.