IN 2012, Jeremy Lin, then a relative unknown to the world of basketball made history by leading a winning turnaround for the New York Knicks; and fans, critics and basketball players around the world, enthralled by his performance, dubbed the whole thing “Linsanity”.

Receiving no athletic scholarship offers out of high school and barely scraping by, Lin graduated from Harvard in 2010 and completely changed his fortunes. Today, he is one of the few Asian Americans in NBA history, and is the first American of Chinese descent to play in the league.

He now plays for the Los Angeles Lakers, wearing jersey #17 and is part of the team’s starting line-up. Together with his team mate, Jordan Clarkson who is half Filipino, the duo became the first Asian Americans to start together in the backcourt in NBA history.

TAG Heuer has now welcomed Lin into its star-studded family which includes football star Cristiano Ronaldo and tennis queen, Maria Sharapova. The Jeremy Lin TAG Heuer is a special edition watch — an Aquaracer illuminated with streaks of yellow. It features a 12-sided bezel with six studs and a ceramic ring, enhanced by a discrete yellow thread with yellow featuring on the second and minute hands as well as the seams of the strap.

It’s a model crafted especially for sports lovers as it is reliable and is defined by a modern, relaxed look. In addition, it is watertight to a depth of 300m, making it a tough, weather-sealed watch that can be worn in all elements.

“I’m excited to introduce my first watch with TAG Heuer. It mirrors me perfectly. It features my logo that has my initials, JL, above my lucky number 7. The 17th minute marker signifies my jersey number,” Lin says of the watch.

With the slogan “Don’t Crack Under Pressure”, TAG Heuer is embracing the underdog that Lin once was, proving to the world that there are no limits when we set our minds to achieving something great. For 150 years, TAG Heuer has faced down every challenge and then pushed past it, leading them to ever higher levels of precision and performance. And Lin? He is the perfect embodiment of this goal. 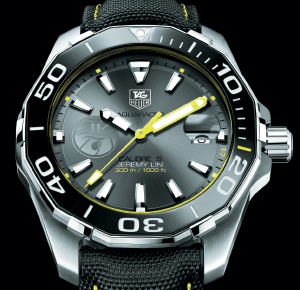