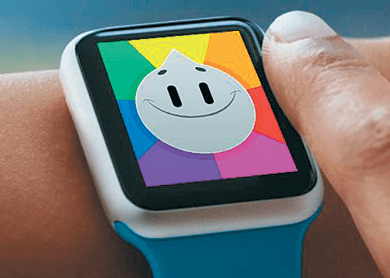 Cast your eye over seven game titles among the first wave of apps available for the Apple Watch at the launch tomorrow.

Trivia Crack
Well prepped for the launch of the Apple Watch, Trivia Crack moves from the mobile platforms where it made itself a home as one of the world’s biggest social quiz apps onto the wristborne form factor with simple interactions and next-move notifications.

Runeblade
Staffed by alumini from the likes of Rovio (Angry Birds Rio), Remedy (Alan Wake), and Digital Chocolate (Tornado Mania!), Everywear Games proposes a heroic monster-conquering adventure that can be played 15 seconds at a time.

Rules!
One of the breakout hits of 2014, both elegant in design and alluringly straightforward in approach, Rules! has players clear each bite-size level of tiles by following a cleverly layered list of instructions. Specifically implemented for Apple Watch owners is a daily brain workout mini-game.

BoxPop
Leveraging the L-shaped paths of a chess board’s horse-headed Knight, BoxPop comes from the makers of SongPop, encouraging players to navigate a pegleg route between key points on its grid shaped levels. Alongside Rules! it’s one of two games in Apple’s showcase of 43 launch-ready Watch apps.

Spy Watch
Bossa Studios has quickly become a hothouse for commercial-grade experimental gaming, with Surgeon Simulator and I Am Bread two recent attention-grabbers. Spy Watch flips secret ops on its head, with players taking on the persona of an agency chief in charge of coaching each spy through dangerous missions.

Watch Quest! — Heroes of Time
Developer WayForward is well known for its cadre of colourful console games, particularly on Nintendo, but will be making its debut in iOS development by leaping onto Apple Watch with this faux retro treasure-hunting, monster-bashing title. — AFP