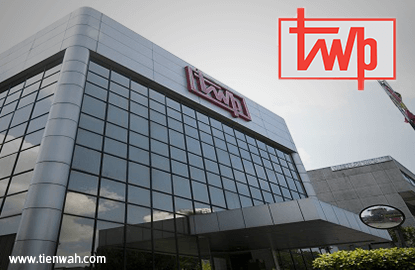 In a filing with Bursa Malaysia today, Tien Wah said its subsidiary Tien Wah Properties Sdn Bhd (TWPSB) had entered into a shareholders agreement with Kemensah to form and operate a joint venture (JV) company currently known as Sterling Model Sdn Bhd for the proposed development at No 9&11, Jalan Semangat, PJ.

The JV company will be a 50:50 venture between TWPSB and Kemensah. The JV company, with the intended principal activity of property development, will be applying to the Companies Commission of Malaysia for the change of company name to Lum Chang Tien Wah Sdn Bhd.

On the same date, TWPSB has also entered into a sale and purchase agreement with Sterling in respect of the sale of land measuring 13,040 square metres (3.22 acres), which is currently held by TWPSB on a 99-year lease from the Selangor state government, for a sale value of RM63.75 million.

The group added that the rationale and benefits for the proposed JV and proposed land sale are to maximise the usage of the land it owned, with the long-term intention of maximising shareholders' value.

"It is also intended to deliver additional income stream for the group, and are in line with the group's strategy to grow and diversify its business operation with sustainable growth as well as to balance its income stream from the traditional source as a result of diversification," said the group.