Three outfits said to be on shortlist for LRT3 PDP 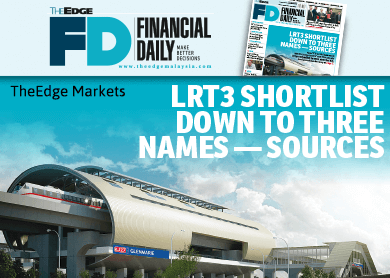 According to sources, the three outfits have put in the most attractive proposals out of seven companies initially shortlisted by Prasarana Malaysia Bhd.

The other four companies that had expressed interest to play the role of PDP were IJM Corp Bhd, a tie-up between Gamuda Bhd and MMC Corp Bhd, Sunway Construction Sdn Bhd, as well as a JV between WCT Bhd and Alloy MTD. Alloy MTD Group of Malaysia is the merged entity of MTD Capital Bhd and its parent Alloy Consolidated Sdn Bhd.

“It seemed that the  three — Naza TTDI- CSR Zhuzhou JV, the MRCB-George Kent JV and UEM — had submitted the most attractive bids. So, it could be one of the three,” a source told The Edge Financial Daily.

When contacted by The Edge Financial Daily, a Prasarana official, however, said the evaluation is still ongoing and that no front runners have been identified yet.

“It’s not true,” the official with the rail and bus operator said of talk that only three outfits are in the running now.

Nevertheless, several rail executives spoken to, and some of the bidders even, said the list of seven had been narrowed down to three, with all suggesting the same three names, which are the Naza TTDI- CSR Zhuzhou JV, the MRCB-George Kent JV and UEM.

The appointment of the PDP is likely to be done soon, with the construction of the LRT3 to commence late this year, as per the schedule of the Land Transport Commission.

Sources said the Naza TTDI- CSR Zhuzhou JV’s strength lies in its proposal, which offers up to 90% financing for the project. Naza TTDI is understood to have a 75% stake in the JV.

A check on Naza TTDI’s website showed that the group had recently added Naza Engineering and Construction Sdn Bhd to its stable of companies, which would enable it to undertake civil engineering and infrastructure works.

There has been talk of Naza TTDI looking at floating the company on Bursa Malaysia, but this could have taken a back seat due to the weak market conditions.

A search at the Companies Commission of Malaysia (SSM) revealed that Naza TTDI, as at end-December 2013, had current assets in excess of RM1.3 billion and non-current assets of over RM1 billion.

The group also had reserves of RM485.2 million.

UEM, meanwhile, via its wholly-owned subsidiary UEM Builders Bhd, is capable of handling such rail jobs as the LRT3, as it has been involved in many large-scale infrastructure jobs, including the Second Penang Bridge.

It was previously rumoured that UEM was looking to hive off UEM Builders, and there were several parties that had expressed interest, but it is not clear what has happened since then. UEM is a wholly-owned unit of state-controlled investment arm Khazanah Nasional Bhd.

MRCB (valuation 1.4, fundamental 1.3) is a construction and development company which is 35.9% controlled by the Employees Provident Fund. Other notable substantial shareholders are Tan Sri Mohamad Salim Fateh Din, who has a 16.7% equity interest in MRCB.

MRCB has been awarded several rail jobs in the past, including the upgrade of the Klang Valley double-tracking system valued at around RM850 million, and has won contracts for the fabrication and delivery of segmental box girders for both the Kelana Jaya LRT and Ampang line extension.

It is also worth noting that MRCB owns the KL Sentral commercial development, which is linked to the KTM, LRT and Express Rail Link systems.

In 2012, Prasarana had awarded George Kent the contract for the engineering, procurement, construction, testing and commissioning of system works for the Ampang line extension project, partnering privately-held Lion Pacific Sdn Bhd. However, there have been delays to this job.

Meanwhile, market observers are surprised at the exclusion of Gamuda (valuation 1.1, fundamental 2.2) and MMC (valuation 1.4, fundamental 0.4) from the final list of candidates, although some said that’s probably due to the many jobs already awarded to the two companies.

Other than being the PDP for the Klang Valley Mass Rapid Transit Line 1 and 2, Gamuda is also among the front runners for the RM27 billion Penang Transport Master Plan, which is expected to be awarded soon.