UEM Sunrise Bhd
(Aug 4, RM0.96)
Maintain hold with fair value of RM1.29: UEM Sunrise (UEMS) recently completed its acquisition of a third property in Melbourne, Australia. It will pay A$58 million (RM165 million) for the 16,000 sq m property (about A$337psf/RM935psf). It currently houses a 21-storey office building on 412 St Kilda Road — one of the main routes into Melbourne’s Central Business District (CBD). The Victorian Police are its current occupants, but are expected to vacate it by mid-2016.

UEMS subsequently intends to convert the building into an “ultra luxurious” residential development, which may also include retail ground floors and serviced apartments. We leave our earnings unchanged for now pending further updates on the proposed project. Funding is not a problem as its forecast financial year ending Dec 31, 2015 (FY15F) net gearing ratio is manageable at 23%.

In October 2013, UEMS acquired two other CBD plots in Melbourne in La Troube Street and Mackenzie Street. The Aurora Melbourne project in La Troube Street — UEMS’ first foray into Australia — was an instant success with a 95% take-up rate achieved within two weeks of its preview last October.

Meanwhile, the launch of the Mackenzie Street project (gross development value [GDV]: approximately RM608 million) was supposed to be ready by year end. Both of UEMS’ existing Australian projects account for RM2.8 billion or less than 1% of the group’s remaining GDV pipeline of about RM82 billion.

Riding on the back of the strong success of Aurora Melbourne, this new purchase solidifies UEMS’ solid progress in the Australian property market, as it continues to diversify beyond the core Nusajaya land bank.

Over in Nusajaya, Johor, the group appears to be reshuffling its portfolio, the most recent being the tie-up with Japan’s Mitsui & Co Ltd to offer built-to-suit developments for lease at Nusajaya Tech Park. This comes after the group had last May terminated a memorandum of understanding with Chinamall Holdings Pte Ltd to develop a 1.4 million sq ft trade and exhibition centre in Gerbang Nusajaya for RM600 million.

Our “hold” call on UEMS remains, as pre-sales momentum for its local projects will likely remain muted in the near term, particularly in Johor (FY15F base new sales target of RM2 billion versus RM2.4 billion achieved in FY14).

A slight positive is the strong response to the recent launches of its Serene Heights development in Bangi, Selangor. All the 121 units of Acacia 2S-terrace homes (priced from RM550,000 onwards) were snapped up during a two-day launch on June 27 and 28. — AmResearch, Aug 4 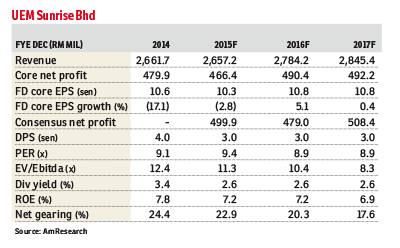