Wealth creators likely to fall short of their aspiration 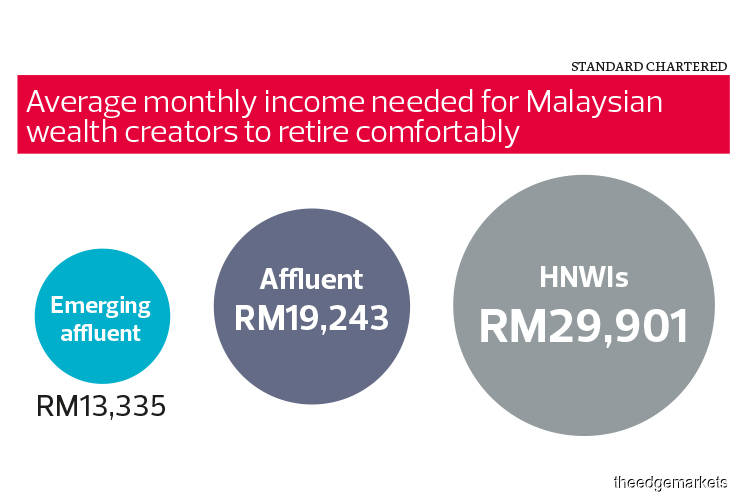 According to the Standard Chartered Wealth Expectancy Report 2019, people’s aspirations tend to outstrip their “wealth expectancy”, or their total net worth, at age 60. The report also pointed out that 56% of the wealth creators surveyed are set to fall short of their wealth aspirations by 50% or more.

A study was conducted among the three “wealth creator” groups — the emerging affluent, affluent and high-net-worth individuals (HNWIs). Unlike traditional measures of prosperity such as GDP and life expectancy, the wealth expectancy indicator hones in on individuals’ peak wealth (their highest point of affluence), assumed to be at age 60.

The survey also found that 93% of Malaysian HNWI respondents were either halfway or very close to meeting their top priorities — significantly higher than the global average of 71%.

According to additional data provided exclusively to Personal Wealth, the Malaysian respondents had an average monthly personal income of RM20,485 and combined monthly income of RM23,314. Their average assets under management stood at RM1,915,822.

Data on Malaysian wealth creators indicated that they were less likely to hold stocks than their global peers. Interestingly, it also showed that HNWIs had more exchange-traded fund (ETF) holdings than their emerging affluent and affluent counterparts.

But despite its reputation as a low-cost asset class for retail investors, only 26% of local HNWI respondents held ETFs, compared with 17% of affluent and 2% of emerging affluent respondents.

According to the report, Malaysian respondents placed great emphasis on investing for their children’s education, investing in property, saving for retirement and funding a business venture of their own.

When it came to investment decisions, the local emerging affluent and affluent respondents used professional advisers sparingly (50% and 44% respectively). These two groups generally made investments with little to no expert advice, according to the report.

However, when the Malaysian respondents did seek out assistance, financial advisers were their preferred choice across all three wealth creator categories. Interestingly, local HNWIs were more likely to use online forms and blogs (32%) compared with the global average (23%).

The Malaysian respondents had a positive view on the benefits associated with using online tools to manage their wealth. In fact, all three wealth creator groups said these digital tools helped them feel more in control of their finances.

The emerging affluent and affluent respondents were most likely to use websites or bank-based apps (46% and 48% respectively) than the HNWIs, whose favourite digital product seems to be online investment portfolio apps (41%).

Additional data indicated that local HNWI respondents had a more conservative streak than their global peers. Some 66% of Malaysian HNWIs said they would only invest online if there were qualified financial advisers available, compared with the global figure of 54%.

According to Standard Chartered Private Bank chief investment strategiest Steve Brice, the wealth expectancy gap arises in part from a failure to plan one’s financial future. This means the sooner people start saving and investing, the faster they will reach their aspirations.

Research shows that a diversified portfolio is key to boosting overall returns. A portfolio split equally between stocks and bonds, for example, would provide a higher return over an extended period than money parked in a savings account.

Generally, when deciding on the allocation to these asset classes, it would be better to apportion more capital to stocks earlier in one’s career. However, closer to retirement, the ratio should be reversed in favour of bonds as the need for wealth preservation becomes increasingly important.