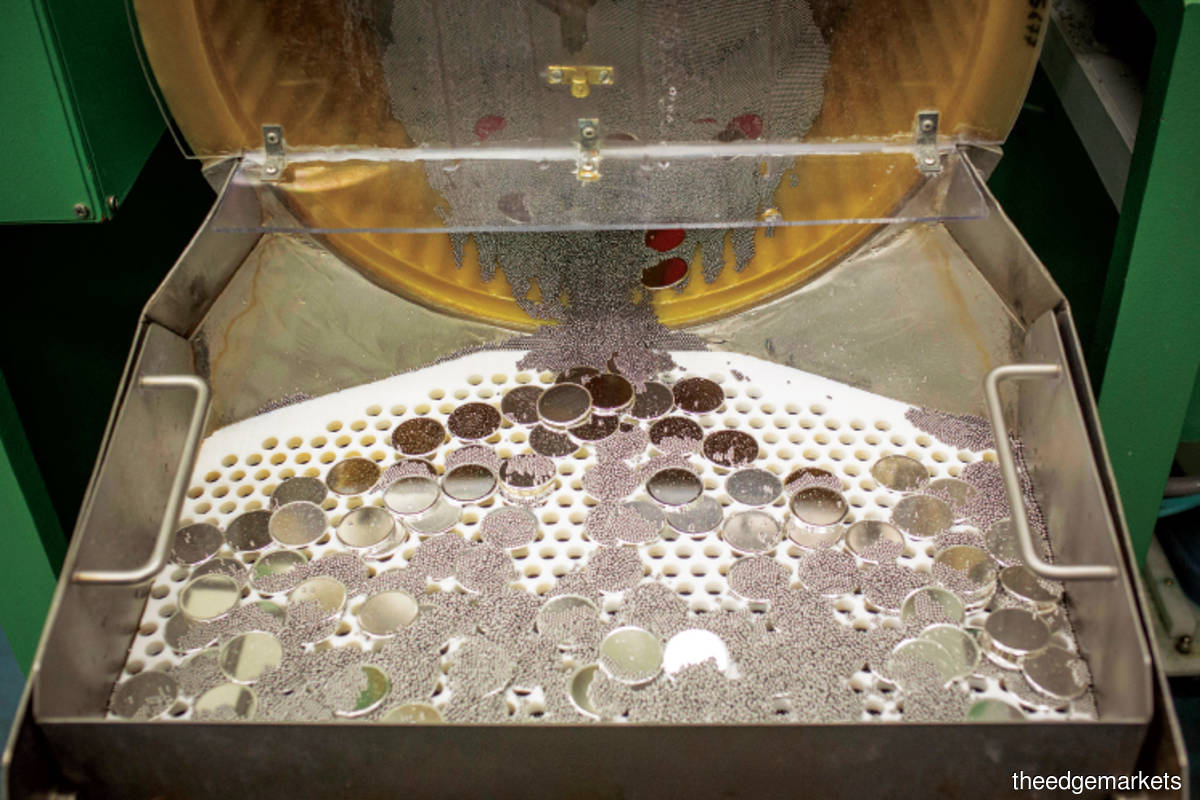 One ounce silver coins undergoing washing at a cleaning facility at the US West Point Mint facility in West Point, New York ... Some market experts expect silver prices to reach US$30 per oz this year. (Photo by Reuters)

The outlook for silver remains bright despite the recent surge in prices. Market experts expect the safe-haven asset to appreciate further on the back of aggressive monetary easing by central banks, a weaker US dollar, lower bond yields and a further rally in gold prices.

Soni Kumari, commodity strategist at ANZ, expects silver to move towards US$28 per oz this year and anticipates investor demand for the metal to sustain for the rest of 2020. She is positive on the fundamentals of silver, with industrial demand from the solar and electronics sectors recovering as well as mine disruptions, which have led to the supply of the metal contracting by 7% this year.

“The silver price trajectory will largely depend on the sustainability of higher gold prices,” she says, adding that the recent rally in prices of the yellow metal has been the primary driver of elevated silver prices.

How high silver prices go will largely depend on the performance of gold. Prices can potentially break past the US$30 per oz level if the gold rally sustains above US$2,000 per oz, says Soni.

“Liquidity injections [by governments] have been stronger than during the 2008 global financial crisis, and this is increasingly supportive for both gold and silver. This was well reflected in the investment demand, and silver inflows [into exchange-traded products] have reached 272 million ounces so far — well above the inflows seen in 2009,” she adds. Halley: As long as the US dollar remains weak and interest rates stay in the deep freeze, silver can move higher — but only as long as gold continues to do so

However, a consolidation in gold prices and a recovery in the global economy could take some shine off the silver metal. “Having said that, we see the current backdrop for investments as still being favourable. Investor demand for silver has been stronger as well, with silver exchange-traded fund (ETF) holdings having seen a sharp rise since March. We expect the demand to hold up well for the rest of the year,” says Soni.

Gold has been in the spotlight in recent weeks for reaching record-high prices, breaching the US$2,000 threshold on Aug 5. Its less popular sibling — spot silver — has also seen an increase in price, which has more than doubled from its low of US$11.74 per oz in mid-March to US$26.46 as at Aug 5.

In fact, silver has outperformed the yellow metal over the past month in terms of returns. For the month leading up to Aug 5, silver managed to gain 42.21% — more than triple gold’s 12.71%.

“The ratio reverted from 1:128 in March all the way to 1:80 today, making it one of the best trades of 2020. The ratio still has further to fall before one can say it is fairly priced, and could fall much more before becoming oversold. That would mean silver has been overbought. Soni: Investor demand for silver has been stronger as well, with silver ETF holdings having seen a sharp rise since March. We expect the demand to hold up well for the rest of the year.

“As long as the US dollar remains weak and interest rates stay in the deep freeze, silver can move higher — but only as long as gold continues to do so. Watch the gold-silver ratio thoroughly for signs of a structural turn in your outlook.”

The gold-silver ratio is the amount of silver it takes to purchase one ounce of gold and is a tool for traders to forecast the price movements of both precious metals.

Mike McGlone, senior commodity strategist at Bloomberg Intelligence, believes that silver can reach US$30 per oz, but US$25 will serve as a good resistance level for the next six months. He also believes that silver will underperform gold in a continued precious metal rally, pointing out that the latter has greater upside potential due to the gold-silver ratio returning to a good support level of about 1:80, as opposed to a peak of 1:120 in March.

“To get [to US$30], silver is likely to follow on the coat-tails of gold prices, which has more enduring upsides from current levels, notably on the back of unprecedented global monetary easing. Rising silver is typically more dependent on a weaker US dollar, rising gold prices and a rising stock market, all of which are less certain than the central banks’ monetary easing policies, [which serves as the] foundation for gold prices,” says McGlone.

Over the past few months, the increase in silver prices has been driven by low bond yields and aggressive global monetary easing.

“The US Treasury real yields curve (rates adjusted for inflation) is now negative all the way out to 30 years. Although silver pays no yields, 0% is still better than -0.5%,” says Halley. Silver prices are not anticipated to grow more than 5% to 10% before hitting their upside limit, says Innes

“The sheer volume of monetary easing by the world’s central banks has led to an unprecedented amount of liquidity in the global financial system looking for a home, much like during the 2008 financial crisis. That has flowed into ever higher prices of assets such as stocks, oil, precious metals and industrial metals. Apart from its safe-haven appeal, silver also has a dual industrial use, which means demand will rise anyway as the world economy recovers.”

However, Halley argues that elevated gold prices are not the main reason for the rally in silver prices. “In fact, silver has led gold and has now doubled in price since the mid-March lows. In fact, it has led stock markets and precious metals since March,” he points out.

“Such price action in silver is down to liquidity. There is simply a lot less of it in the international futures markets, where most trading in silver takes place. Silver was extremely oversold in March, with an equally extreme recovery over the past few months.”

Despite the announcement of a larger stimulus package than the ones witnessed in the previous financial crisis, Schroder fund manager and metals analyst James Luke believes that silver prices will remain far below their 2011 highs of US$48 per oz in the long term. However, he points out that investors can still expect gains in silver prices over the coming quarters.

“Since March, silver prices have benefited tremendously from a combination of increased investor demand and greater recognition that this is a material integral to the energy transition, particularly via its usage in the solar industry,” says Luke.

“We believe silver prices, as with gold, could significantly shift to the upside as major investors no longer have ‘safe assets’ to turn to. In past cycles, US Treasuries became the obvious safe haven to turn to.

“Now, US Treasury yields are very low and the fiscal situation in the US (which is seeing an unprecedented deficit) is obviously unsustainable. With massive financial liquidity chasing a shrinking pool of safe assets, even small allocations to precious metals can cause big price moves.”

Conversely, Stephen Innes, chief global market strategist at AxiCorp, is of the view that the prices of safe-haven assets such as gold and silver are too high at the moment and investors are generally holding an overly pessimistic view of the economic impact of the Covid-19 pandemic. He believes that the current price of silver is already hitting its resistance level and does not foresee the price growing more than 5% to 10% before hitting its upside limit.

“What we are looking at right now are people making correlations to the high silver prices in 2011. It was really during the recovery phase of the great financial crisis when the stimulus started to kick in and we saw silver prices flying to near US$50 per oz,” says Innes.

“The economic cycle is much more compressed now because there is [a larger amount of] stimulus behind this recession and its distribution time frame is [a lot shorter]. Now, we are starting to see an economic recovery take off pretty aggressively and investors are expecting inflation to shoot up.

“There will be added oil to the fire when the vaccine comes in and people expect hyperinflation. That is why investors are buying silver and gold — to hedge against this inflation.”

However, Innes warns that if a vaccine is developed earlier than expected, the economic recovery could be reduced from the anticipated two years to a year or less. Central banks would then pull back on their stimulus to guard against inflation and silver prices would decline drastically because there would be no inflation to hedge against.

For retail investors who are interested in adding silver to their portfolios, Innes recommends investing via silver-backed ETFs or robo-advisory platforms that offer exposure to the precious metal market. He explains that these ETFs are bought and sold like stocks and are generally much easier for investors to hold on to compared with silver bullion. Robo-advisors also help investors manage their risk through algorithms that are much quicker and more effective than investing manually.

In Malaysia, investors have the option of buying silver bullion, such as silver coins or bars, through local traders. They can also purchase the metal through silver investment accounts provided by banks or unit trusts that invest in precious metal securities.