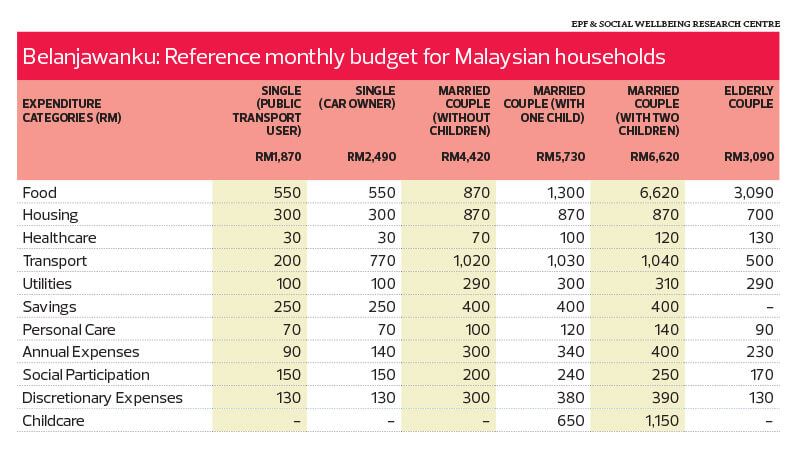 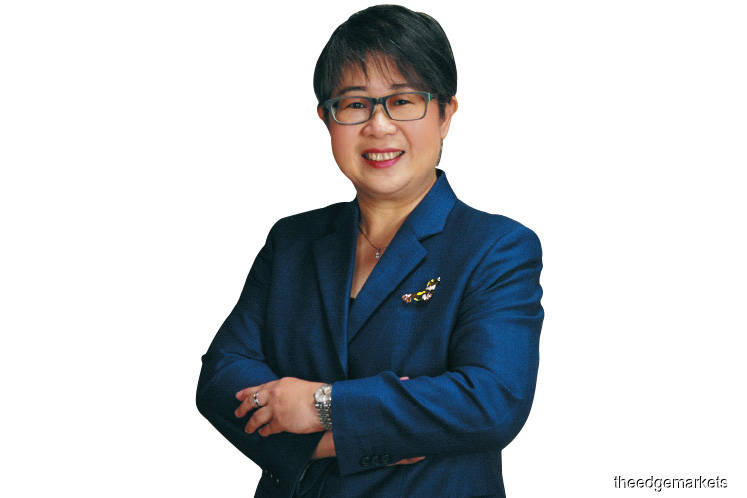 Building a healthy savings habit has a lot to do with psychology. It has nothing to do with how much you earn because there are many who earn a lot yet have very little savings. - Chuah

Malaysians now have a local yardstick to help them improve or start managing their personal finances, following the launch of Belanjawanku, an expenditure guide published by the Employees Provident Fund (EPF), on March 4.

According to EPF, the guide provides an estimated minimum monthly expenditure on various types of goods and services for different households in the country. Its purpose is to help Malaysians plan their personal and family budgets to achieve a reasonable standard of living. It also shows the minimum amount of income needed for different households.

Belanjawanku was developed by EPF and the University of Malaya’s Social Wellbeing Research Centre, based on actual spending patterns of urban households in the Klang Valley. The guide will be expanded to cover other states soon.

At the launch of Belanjawanku last Monday, Finance Minister Lim Guan Eng said in his speech that the guide could help Malaysians understand the reality of their purchasing power and prevent major financial problems. He cited a 2014 study by S&P Global Literacy Financial that pointed that Malaysians’ grasp of financial knowledge stood at just 36% compared with 59% in developed countries.

The issues of low financial literacy, the rising cost of living and overindebtedness among Malaysians were the underlying motivation for the development of Belanjawanku, EPF CEO Tunku Alizakri Alias was quoted as saying. “This guide will also be adopted by our Retirement Advisory Services officers in providing our members with financial guidance and advice, in complementing what is essentially a flagship EPF service. We expect Belanjawanku to form the bedrock of society’s strong financial well-being, leading to a better quality of life in the long term.”

Success Concepts Life Planners CEO Joyce Chuah approves of the move, saying that Belanjawanku should serve as a basic guide for Malaysians to come up with their monthly budgets. “It is a great start to help those who are in a state of ‘inertia’ about their finances.”

She highlights the importance of the estimated monthly savings Malaysians should have, which starts from RM250 for those who are single and RM400 for those who are married with two children. “It is very important for you to lock your savings ‘behind bars’ and do so the moment you get paid. Millennials, in particular, tend to be very short-sighted as they like to ‘live for the day’.

“The budget becomes a good guide because it is a monthly reference, not a long-term one. The aim here is to encourage people to track their spending. This budget can then be used alongside budget-tracking apps.”

Chuah suggests breaking down the estimated figures even further. For instance, if one is single and only supposed to spend RM550 on food a month, then that amount should be broken down by week and by day.

“Use the budget to break down the estimated numbers into smaller amounts and track your spending every day so that it becomes a habit. Over a few years, that habit will become part of your character,” she says.

However, Chuah believes that certain estimates provided in the guide can be revised. For instance, Belanjawanku estimates a monthly expenditure of RM2,490 for singles who own a car and RM1,870 for those who use public transport. Of this amount, the estimated expenditure for housing is RM300.

“This is a very basic guide. Some millennials may find it difficult to live on just RM2,500 a month [for singles who own a car]. It can also be challenging to find a room to rent for RM300 in the Klang Valley. Many rooms are now being rented for upwards of RM500,” she says.

“We also need to consider the fact that some have bought houses. So, the minimum expenditure for them should be around RM1,000. Perhaps the housing category could be further broken down into rental and mortgage options.”

Chuah was one of the panel speakers who discussed the expenditure guide after it was launched at the EPF Learning Campus recently.

According to the guide, insurance comes under discretionary expenses. She suggests having this placed under the healthcare category. “The minimum expenditure for insurance, especially for the medical hospitalisation plan, is RM150 per month. So, if we include healthcare supplements, medication, annual health screenings and doctors’ consultation fees, it will come up to RM50 per month [on a pro-rated basis]. Thus, the total is RM200 a month for healthcare.”

Another item that should be added to the guide is an emergency fund that amounts to 5% to 10% of one’s income, says Chuah. “I believe in Murphy’s law, which is anything that can go wrong will go wrong.

She also suggests having an additional reference point for those who do not earn enough to match the estimated monthly budget. If one cannot meet the recommendations, having tips on how to manage their monthly expenditure while roughly following the guide will be helpful, she says.

Belanjawanku estimates that an elderly couple needs RM3,090 a month. This is a conservative figure, says Chuah. “If the couple is healthy, they would require RM2,000 each at the very least. That is assuming they have no liabilities or insurance to pay. This amount is merely for living and social expenses.”

For those who are aged and require nursing care, the amount is higher. “It costs RM3,000 a month for a person to live at an old folks’ home, and that excludes things such as medication and diapers,” she says.

Chuah says it is important to revise some of the figures so that young people would not look at these and think they would not need much during retirement and subsequently under-plan for it. “It becomes dangerous if they do not think they need to plan so much and that their EPF savings alone are enough.”

Having a good attitude towards savings

Chuah says being a good saver is 80% attitude and 20% head knowledge. The expenditure guide is part of the latter, she points out.

“Building a healthy savings habit has a lot to do with psychology. It has nothing to do with how much you earn because there are many who earn a lot yet have very little savings. Tracking your monthly expenditure and comparing it with the estimates in Belanjawanku can help build this habit,” says Chuah.

For those who are either sceptical or simply cannot afford to follow the expenditure guide, Chuah advises them to at least follow the recommended monthly savings amount. Although the suggested allocation is rather low, it is a good start, she says.

“If you cannot follow the recommended minimum savings amount, then review your other expenditures. For example, if you smoke, try to reduce your consumption or find a cheaper alternative.

“For utilities [which the budget recommends RM100 a month for singles], if you spend more than what is suggested, then review your telecommunications subscriptions. That is because they tend to get cheaper, especially after the government implemented the Mandatory Standard on Access Pricing for broadband packages.”

Tracking your expenditures constantly is even more important for those with acute cash-flow problems, says Chuah. Couples who are planning to have children should refer to the guide to help them prepare financially for the journey, she adds.

The collection of data for the guide was done between July 2017 and July 2018. Primary data collection points included questionnaires, focus group discussions and price surveys. Secondary data was derived from documents published by bodies such as the Department of Statistics and Bank Negara Malaysia. The guide uses the average price of goods and services.