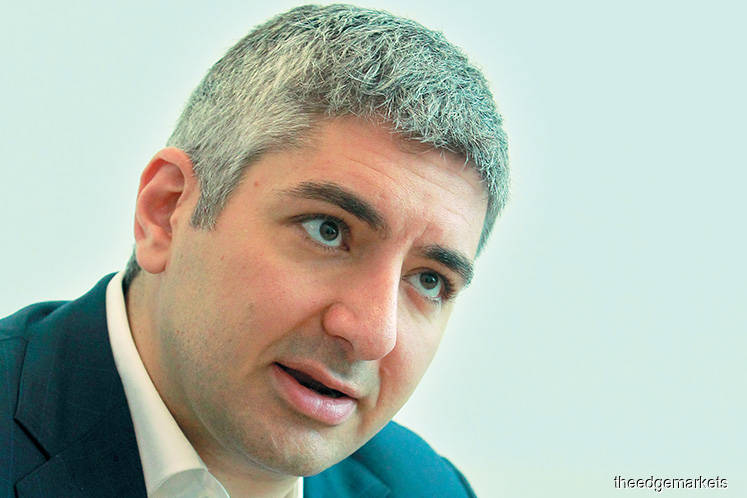 Right now in the US, you will not be able to raise funds unless your father has money, you went to the right school or you have the right contacts in Silicon Valley. - Arslanian

A few years ago, the global cryptocurrency ecosystem was completely unregulated. Anyone could publish a white paper to raise funds and even set up a digital asset exchange without applying for a special licence.

Today, however, regulators all over the world, including in Malaysia, are coming out with their own guidelines and frameworks for initial coin offerings (ICOs) and digital asset exchanges.

This has been well received by cryptocurrency stakeholders, says Henri Arslanian, PwC’s fintech and crypto lead for Asia. “The cryptocurrency community is the only financial services vertical that asks for more regulations — to bring credibility to the space and take away the bad apples. Then, more sophisticated and institutional investors will be willing to come on board, spurring the ecosystem.”

Last month, the Securities Commission Malaysia (SC) published a consultation paper on the framework for ICOs, seeking public feedback. This came right after it amended its Guidelines on Recognised Markets to introduce new requirements for digital asset exchanges, or electronic platforms that facilitate the trading of digital assets such as bitcoin and ethereum.

In Asia, cryptocurrency-related regulations vary in rigidity. Singapore, for example, has ruled out any ban on trading and said it may issue its own cryptocurrency in the future. Japan recognises bitcoin as legal tender and had relatively lenient cryptocurrency policies until recently, when it increased scrutiny over exchanges’ cybersecurity, anti-money laundering and anti-fraud policies.

China has banned all ICOs and cracked down on trading platforms, by not only banning national cryptocurrency exchanges but also restricting the access of its residents to platforms based in other countries. Similarly, South Korea has prohibited all domestic companies and start-ups from participating in ICOs.

“Regulators have been doing their part. I travel the world to talk about cryptocurrencies and I find that the general public often does not know how knowledgeable the regulators are on the technology asset class. A lot of work goes into drafting the frameworks and making sure they are putting the public  interest first. In my personal experience, the average regulator knows more about this space than the average financial services professional, yet they do not get enough credit for it,” says Arslanian.

An interesting thing to note amid the tighter regulations surrounding cryptocurrencies is the rise of best practices. Due to the urgent need for a safer cryptocurrency trading environment, industry players have taken it upon themselves to promote best practices for the community.

“There are now best practice documents for ICOs as well; even PwC has one. We issued the document last December and shared it with anybody who wanted it,” says Arslanian.

Arslanian has been in the cryptocurrency space since 2013. He thinks ICOs are important because it allows anyone to raise money to fund their projects.

“Right now in the US, you will not be able to raise funds unless your father has money, you went to the right school or you have the right contacts in Silicon Valley. If you come from an average family and attended an average school, there is no way you could raise millions in a matter of days, even if you have a brilliant idea,” he says.

But it is no longer a walk in the park. Arslanian says it has been difficult to raise money through ICOs for the past eight months.

According to a March 31 report by The Wall Street Journal, about US$118 million was raised via ICOs in 1Q2019 — about 58 times less than the US$6.9 billion raised during the previous corresponding period. Citing data provided by ICO analytics website Tokendata, the report argued that investors had been put off by the actions of regulators against non-compliant ICOs, as well as the general bear market over the previous year.

On the flipside, there has been greater participation among institutional investors, thanks to tighter regulations, although these investments are spread out across the cryptocurrency space and not specifically in ICOs, says Arslanian. “Capital owners want some regulatory clarity before they can deploy their money, and this is true for asset managers, venture capital funds and family offices. Regulations give them comfort for something that is perceived as risky as cryptocurrencies. So from that perspective, I think regulations are welcome.”

It is very apparent that institutional investors are beginning to show interest in the space, he says. Last year, the second largest endowment in higher education — the Yale Endowment — was reported to have been one of the investors that helped a new fund focused on digital assets raise US$400 million.

Earlier this year, it was revealed that the University of Michigan’s US$12 billion endowment plans to bolster its investment in a “cryptonetwork technology fund” called CNK Fund I. According to the agenda for the university’s Board of Regents meeting on Feb 21, the fund invests in cryptonetwork technology companies across the spectrum of seed, venture and growth stage opportunities.

There may be more of these investments going forward, says Arslanian. In fact, Boston-based pension and endowment consulting firm Cambridge Associates released a report on Feb 18, highlighting that institutional investors should begin exploring the cryptocurrency industry with an eye on the long term.

“It is very bizarre looking at how many institutional investors and players are now in the cryptocurrency community. Not even two years ago, JP Morgan Chase CEO Jamie Dimon said bitcoin was a scam and it would not end well. Now, the bank is launching its very own digital coin — the first major American bank to do so. It is very interesting. I think this will be a major catalyst,” says Arslanian.

Fraud prevention is the main reason the cryptocurrency community wants regulations in place, especially in the light of infamous incidents such as the Mt Gox hack, which caused some investors to lose millions of dollars in bitcoin. Mt Gox CEO Mark Karpelés was arrested in Japan in August 2015 and charged with fraud and embezzlement (although none of these charges are directly related to the theft).

More recently, the largest cryptocurrency exchange in Canada, QuadrigaCX, announced that its CEO — allegedly the only person with access to US$190 million in customer funds — had died. Later, it was revealed that the exchange faced financial difficulties and most of the money did not exist.

“These news items are unfortunately bad for the whole industry because if you are cynical, this will confirm your negative perception. It also does not help that there are many other fraud cases, especially in ICO issuances. Even though there are bad apples out there, the reality is that there are a lot of good companies doing legitimate ICOs to build something innovative,” says Arslanian. He divides ICO issuers into three categories — companies that excel from the start and deliver what they promise to investors, companies with good intentions but have yet to deliver a real platform or product, and companies that should not have raised any money in the first place. “I find the second category very interesting because some of them genuinely do try, but do not make it due to matters beyond their control. For example, most of these ICO-funded companies raise their money in cryptocurrencies, mainly bitcoin and ethereum.

“For the last 12 months, the prices of these cryptocurrencies have fallen by up to 80%. Let’s say somebody has RM10 million to build something and now the value of their cryptocurrency is down to RM2 million. They simply do not have enough to do whatever it is they promised.”

Arslanian says it is sad to see this happen so often that PwC, as the companies’ adviser, even launched “Crypto Insolvency” — a document that lists out 10 things every director of a cryptocurrency firm needs to know when things start to go wrong. PwC is helping these companies go insolvent in a proper and orderly manner.

“Something a lot of companies fail to do is pay their creditors pro rata. Let’s say a founder wants to go insolvent and his lawyer is most persistent at claiming payment. He would pay his lawyer just to shut him up and forget about his developers, PR team and headhunters. This will give him a lot of legal trouble in the future. We want to prevent this from happening,” says Arslanian.

The future of finance

Over the past few years, the financial industry has seen disruptions in various verticals following the digitalisation and innovations of smaller financial technology (fintech) players. Henri Arslanian, PwC’s fintech and crypto lead for Asia, thinks that 2019 will be the most exciting year yet as he anticipates further improvements powered by technology.

He says security tokens are likely to take off this year. These security-backed cryptographic tokens can be used to pay dividends, share profits, pay interest or invest in other tokens or assets to generate a profit for the holders, which solve liquidity issues. It could also make corporate actions more efficient.

“Think about it, the way we process dividends, vote and handle shareholder meetings is dinosauric — we still have to send proxies by mail. Security tokens can streamline corporate actions and make them better. With security tokens, I will know at any moment who my shareholders are. Technically, I could even do daily dividends instead of quarterly,” says Arslanian.

Stable coins, which are backed by fiat currencies, will also play a larger role this year, he says. Viewed as a safe haven for cryptocurrency traders looking for stability without leaving the crypto ecosystem, the digital assets are also attractive to mainstream users looking for means of payment or a stable store of value to conduct day-to-day transactions, he adds.

Heading towards the longer-term future of finance, the cryptocurrency technology coupled with artificial intelligence may give the public a chance to monetise their data, he says. “Today, platforms such as Facebook and Google are able to capture and use users’ data for free. I think in the future, we will be able to sell our data to these platforms and get paid in micro-crypto payments, since it will not make sense to wire such small amounts with fiat money.